Most artists would love their work to be described as “spectacular” — but not Yann Kersalé. Even though his nighttime illuminations of public spaces are show stoppers, he sees them as invitations to stroll, not gawk. Darkness, he believes, is an opportunity to explore a world obscured by sunlight. His installations are meant to be walking tours of an otherwise invisible limbo.

Unlike Olafur Eliasson or James Turrell, whose medium is also light, Kersalé, 53, a native of Brittany, France, is not part of the contemporary art scene. His work is more akin to urban renewal projects: he wants to reclaim the night for the general public, create venues for residents to get together after working hours, and open up new neighborhoods where nocturnal sightseers can wander safely.

About one third of his clients are municipalities and local associations. “I am not an electrician, neither am I stage designer nor a landscape consultant,” he says. “I am a creative entity. My craft is to brighten up things after sunset.”

His first large-scale urban project, in 1991, was a harbor installation for the city of Saint-Nazaire. Kersalé, the son of a fisherman, is familiar with the beauty of a star-studded sky over the pitch-black sea, and at home on the waterfront, among cranes and containers.

So he proposed to light up the loading facilities of the busy commercial port whose heavy equipment was considered by most to be a visual blight.

“Once I light it up, it will be your Eiffel Tower,” he told the mayor. Originally conceived as a temporary installation, the dockside illuminations, as eerie as a moonlit landscape, are now the centerpiece of the cultural and economic revival of the city.

Since, a number of European towns, among them Paris, Le Havre, Nantes, Cherbourg, Montpellier, Bordeaux, Lisbon, and Brussels, have asked Kersalé to create nighttime infrastructures. Most recently in Tunis, he flooded a mile-long pedestrian mall with sensual ripples of light; in Nice, he designed a blue canopy over a tramway route; and over countless rivers, in France, Belgium, Canada, and Korea, he has transformed suspended bridges into virtual apparitions, making their spans look like the graceful arcs of shooting stars.

But his most notable projects were done in close collaboration with architects, particularly Jean Nouvel. “To tease Jean, I tell him that he is an architect by day, and I am an architect by night,” says Kersalé, who looks like Nouvel’s twin brother.

Partnering has turned into a friendship, and now Kersalé can be credited with  the evening metamorphosis of Nouvel’s Agbar tower in Barcelona (2005) and the night landscaping of Nouvel’s Musée du Quai Branly in Paris (2006). Together, the two men have also devised the lighting scheme of the upcoming Abu Dhabi Louvre museum and the recently-awarded Paris Philarmonic Music Hall.

Helmut Jahn is another architect who relies on Kersalé in the planning stage of his monumental projects, from Berlin to Bangkok. “I routinely experiment with lighting on full-scale models of the façade of buildings,” says Kersalé. “Architects and their clients have come to realize that tall structures are potential beacons in the night sky.”

Last but not least, Kersalé has a following among private and corporate art patrons (Hermès, Thierry Mugler, Robert Clergerie, Gallimard) who want to show their collections in-situ, in the Land Art tradition.

But whether at the scale of a garden or that of a city, whether permanent or ephemeral, Kersalé’s installations are always lighted pathways guiding visitors along a winding course. Movement is often suggested, in the form of a shimmer, a flutter, an imperceptible shift in colors, the interference of a mist, the rustling of a breeze, or a rippling of shadows. As one gets used to the darkness, the discreet lights seem to gain in intensity.

With less wattage than is necessary to run a refrigerator, Kersalé can own the night. 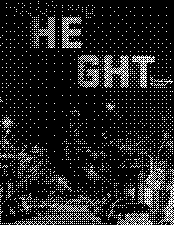 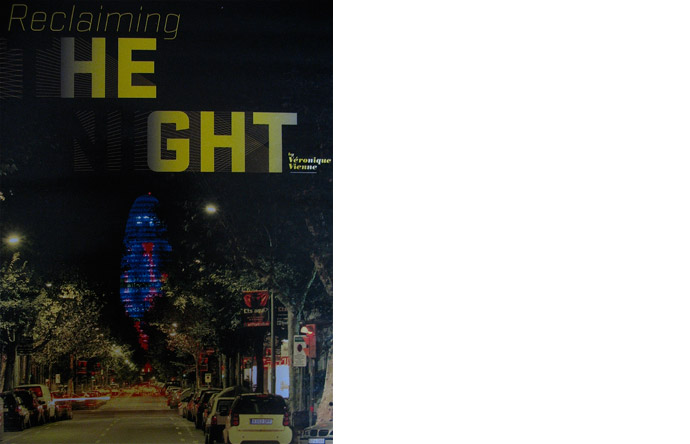 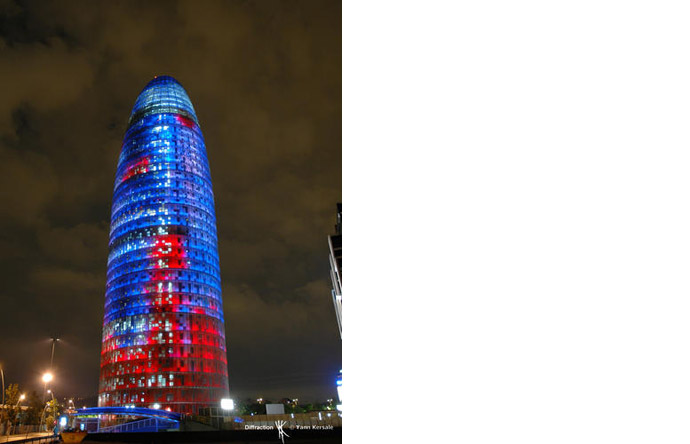 2/6 - Designed by Jean Nouvel, the bullet-shaped building becomes a garish beacon at night 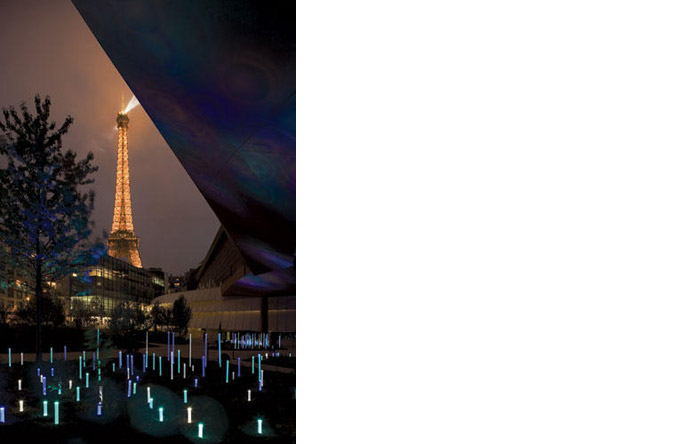 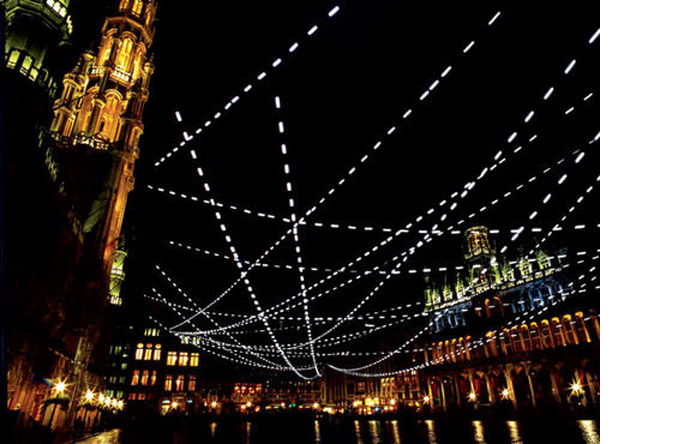 4/6 - Dotted lines above the Brussels Grand Place come from the four cardinal points, 2008 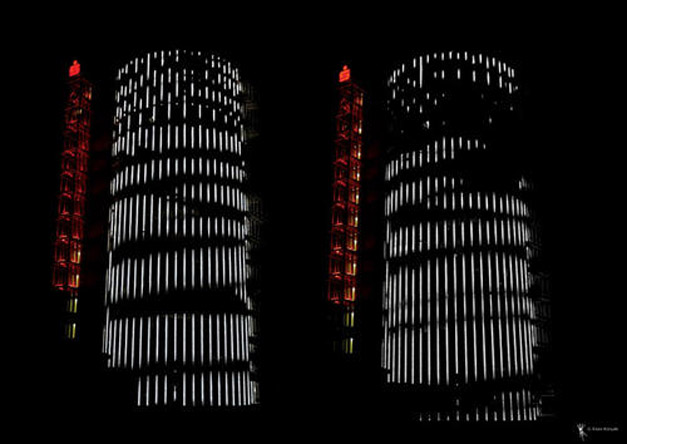 5/6 - Silvery reflections on the facade of the Sparkasse Tower in Pforzheim, Germany, 2005 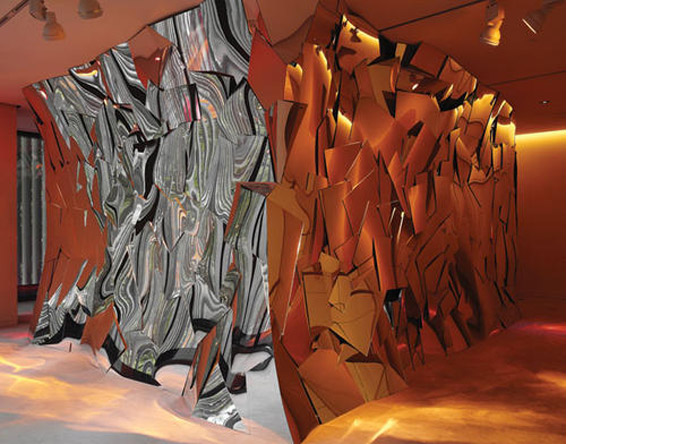 6/6 - A Kaleidoscopic box for the Hermès Galerie in Singapore, 2006