What happens when the fist holds the pen

American friends recently sent an email: “What’s going on with the French political system? Why all the strikes? What about the endless protest marches? We’d like to visit you in Paris, but we are a little wary.”

Indeed. The other morning, I was trying to catch an early flight out of Charles de Gaulle airport to visit my daughter in Los Angeles, only to realize that, on this particular day, there was a train strike, a suburban railway strike, a subway strike, and a taxi strike. Air France was also experiencing a series of walkouts. My favorite radio stations had joined the protest movement and weren’t broadcasting. There was sure to be major traffic jams caused by sign-carrying demonstrators marching down main avenues.

Did I panic? Nope. I opened the Uber app on my iPhone and ten minutes later I was on my way. A couple of clicks were all I needed to solve my predicament—and to demonstrate, in one swipe, why all these people are unhappy. Their services are about to become expendable, to be replaced by apps and robots. To quote Eliza Doolittle in My Fair Lady: “And without much ado, we can all muddle through—without you.”

Are strikes and street demonstrations the most effective tools to counter the disruptive effects of technology on our livelihoods? Probably not. But the question is particularly resonant in France today as we are approaching the 50th anniversary of the May 1968 students’ uprising. A month-long nationwide general strike, it had been prompted by a growing dissatisfaction with what we now call the market economy. With slogans like “Consume less, you’ll live more,” the protest movement had shaken the regime—but, obviously, not changed the course of history.

However, in France, plus ça change plus c’est pareil —the more things change the more they stay the same. Taking to the streets to express one’s disagreement with government policies was—and still is—the sacred civic duty of French citizen. The venue for this ritual of public dissent is the city itself. In Paris, streets are not simply stretches of asphalt conveniently laid out between buildings to get you safely from here and there: they are the grand setting for your displays of good citizenship.

The word for citizen is citoyen (pronounced sit-wow-ya). It acts on the French psyche like a rallying cry. If you are French, when you hear that word, your pulse quickens. Your right hand constricts slightly. Your elbow moves forward imperceptibly. You want to raise your fist—it’s almost a physical response. Your clenched fist, however, is more than just a symbol of solidarity and support for a cause. It is the hand gesture you make to grab a magic marker or a spray can and scrawl a message on a wall.

In France, hand drawn slogans are unlike graffiti or tags. Neither an art form like a graffiti nor a stylized signature like a tag, a statement written in longhand is a unique artifact. With apologies to Gutenberg, with five fingers wrapped around a pen or a brush you can often transmit a subversive idea better than with a printing press (or a Twitter handle).

Whether on a wall or on a piece of cardboard held aloft by a demonstrator, a scribbled slogan will be much more credible and eloquent than the same slogan set in type.

In May 1968, in Paris, students had painted slogans on walls, but also on bridges, sidewalks, fences, stairways, columns, pediments, and pedestals. Acts of vandalism for some, the calligraphic pronouncements were perceived by Parisians as  “bulkhead poetry” (poésie des murailles), an attempt to let the walls speak in street vernacular.

Consume less, you’ll live more was one of the most popular slogans inspired by the rhetoric of the Situationists, a small but influential group of left-wing militants. Fifty years after their creation, many of May ‘68 aphorisms have become truisms : Be realistic, demand the impossible. It is forbidden to forbid. Let your imagination rule. Beneath the cobblestones—the beach.  Others, less consensual, have kept their edge: They try to buy your happiness, steal it. The boss needs you, you don’t need him. The barricade blocks the street but opens the way.

In 1968, the Paris Beaux-Arts school was the headquarters where hand-drawn posters, reproduced using the laborious silkscreen process, were conceived and validated by a committee of volunteers, before being distributed for display on city walls. From there as well, directives were given to wall scribblers, dispatched to strategic locations all over town. The school was a hive of creativity, their action in sharp contrast with that of more militant groups stationed on barricades.

Heirs to May ‘68, today’s French art students carry the genes for ink-stained fingers and paint-smudged hands. Recently, I gave a group of Parisian undergraduates a simple exercise: to transform a printed quote into a handwritten slogan.

They were to cut placards out of a big pile of flatten cardboard boxes and scroll the words on it, with either markers or paint. They got to work at once with a clarity of purpose that filled the room with a hum. I expected them to question the assignment: they didn’t. Instead they spontaneously organized in groups to best handle the various tasks. Some knowledge, buried deep in their reptilian brain, kicked in, and they put pen to placard.

I had proposed three quotes, ranging from the politically correct to the subversive. Pretty much everyone chose the latter, a quote by famous French short story writer Guy de Monpassant: “Chaos, that’s the only truth there is.” (Le bordel, il n’y a que ça de vrai). Ironically, chaos was nowhere in sight. Even though their hand painted signs were graphic explorations rather than exercises in style, they all exuded self-confidence.

Given an opportunity, would US kids have handled the assignment with the same aplomb? When Florida students held huge rallies for gun control, like French students, they took to the streets with cardboard, pen and ink. Their handwritten signs were evidence that they had a native knack for the catchy phrase. Prayers don’t save lives. Protect kids not guns. Arms are for hugging. Books Not Bullets. A sincere plea, held by a little girl, stood out: When I grow up, I want to be still alive.

The web took notice. Slate and USA Today, as well as countless blogs published articles featuring what they deemed were the best March for Our Lives protest signs. The youth of the marchers made up for their lack of graphic sophistication.

The secret weapon of handwritten and handheld signs is their photogenic appeal. To be honest, they look much better in pictures than in reality. They are effective tools against the dematerialization of human interactions in so far as they create photo opportunities online. They can worm their way between the pixels and penetrate the consciousness of viewers better than any politically motivated words or images on the screen.

Parisian demonstrators have the advantage of a scenic backdrop to display their signs. The looming celebrations of May 68 will be the pretext to bring forth black and white photos of the period—the historic Parisian limestone surfaces and granite sidewalks enhanced by the presence of loosely scribbled aphorisms. Nostalgia will soften the gritty images but it will not obliterate the important message: the hand is still mightier than the Click Here button. 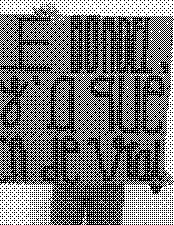 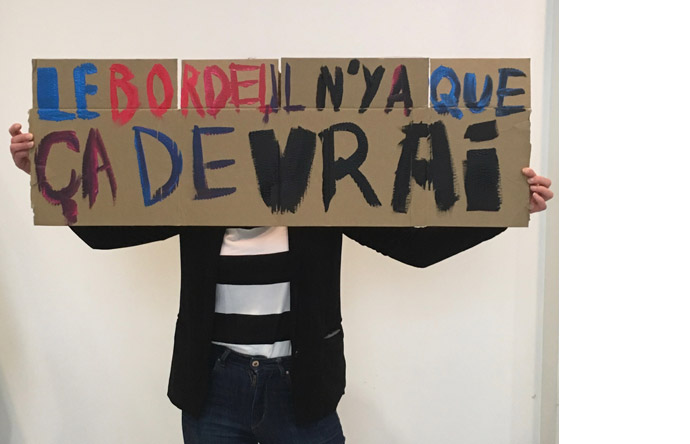 Students of the lycée August Renoir in Paris carry the genes for ink-stained fingers. 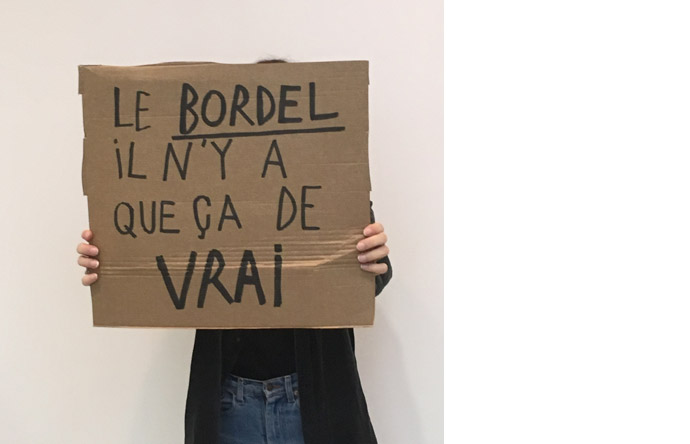 The assignment: to transform a printd quote into a hand-written slogan. 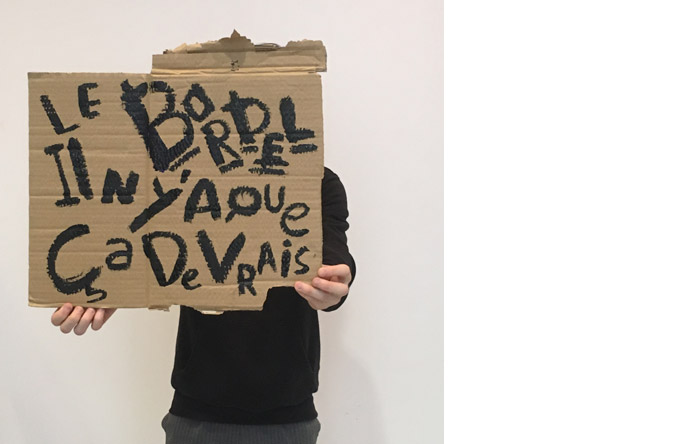 The students cut placards out of a big pile of flatten cardboard boxes and scroll the words on it. 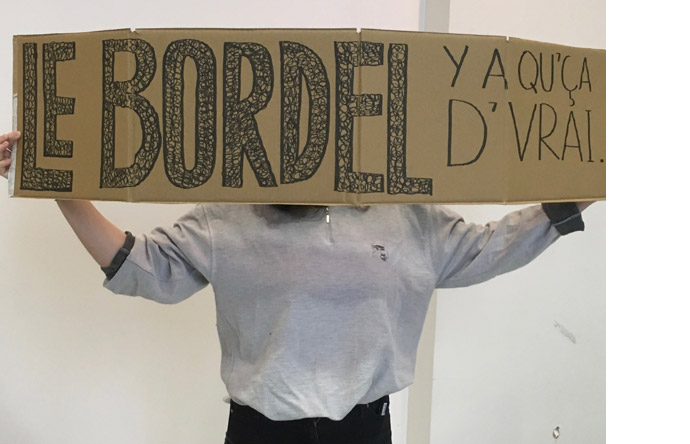 I expected them to question the assignment: they didn’t. 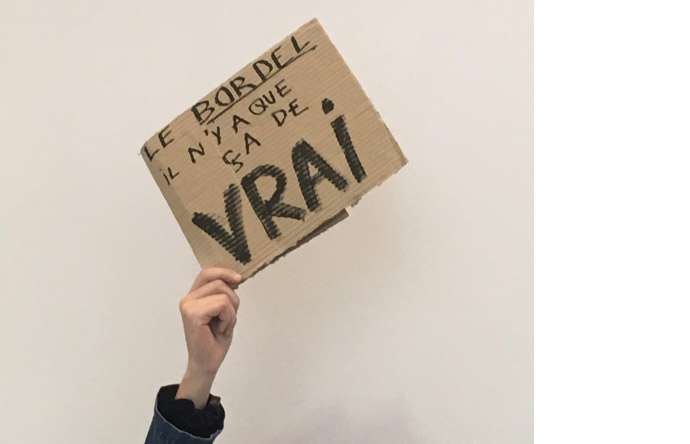 They spontaneously organized in groups to best handle the various tasks. 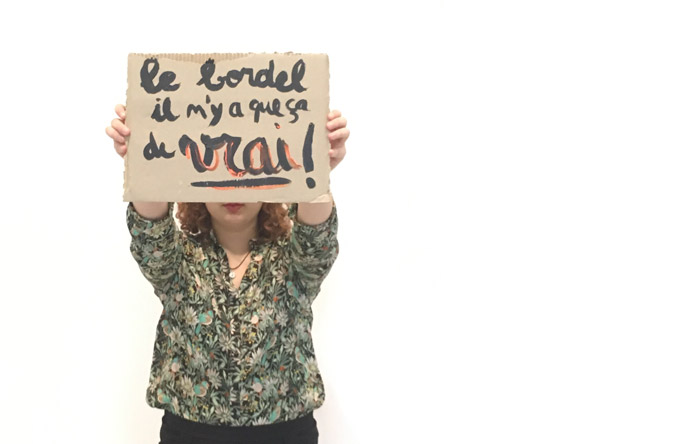 The proposed quotes were ranging from the politically correct to the subversive. 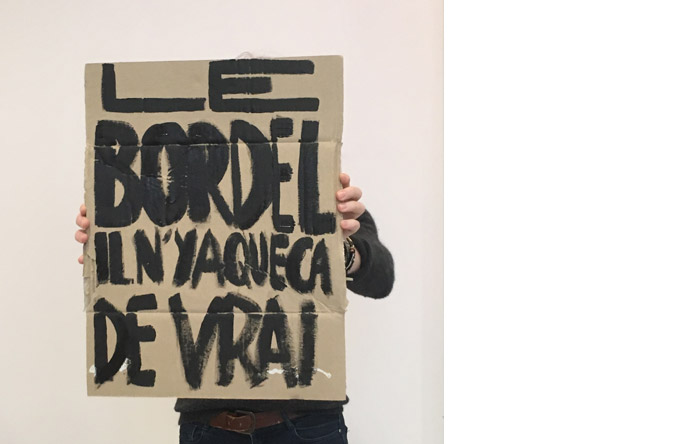 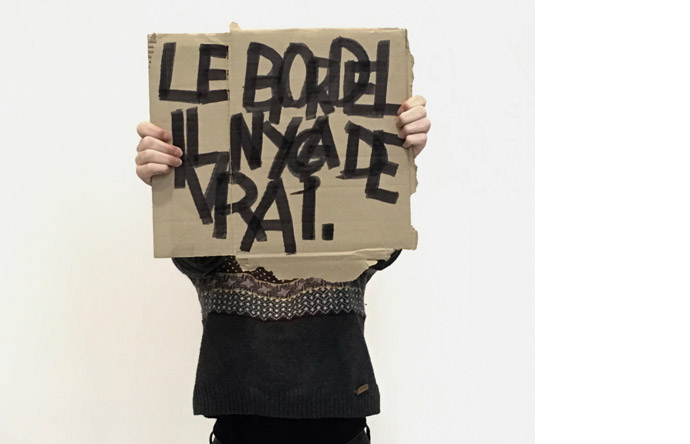 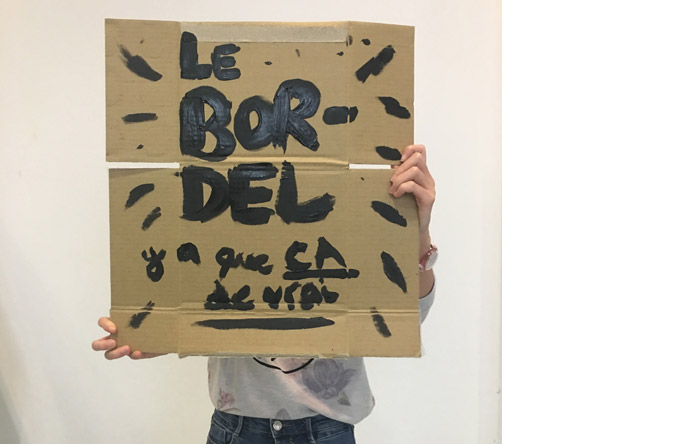 Given an opportunity, would US kids have handled the assignment with the same aplomb? 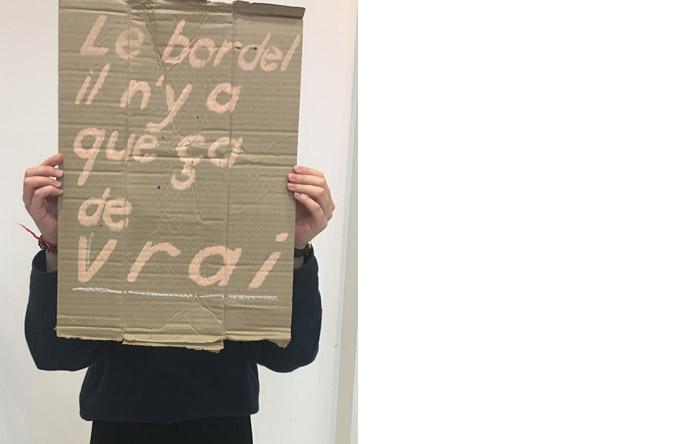 The secret weapon of handwritten and handheld signs is their photogenic appeal. 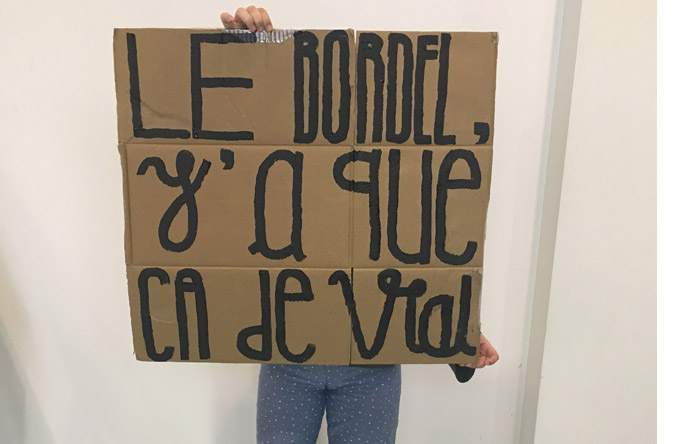 Hand-written slogans are effective tools against the dematerialization of human interactions.