The Eyes of a Child: Sally Mann and Larry Sultan

Her photographs should come with a warning label: "Being seen through the eyes of a child can be hazardous to your self-esteem."

Since 1947, when he bought his first "Isobox" Agfa, my father has taken about 25,000 family pictures. He never edits his photographs but has catalogued every single exposure, cross-referencing names, locations and subjects. Arranged in chronological order, his collection fills 40 photo albums that are stored on the lower shelves of a bookcase in what used to be my bedroom.

When family members come to visit, one by one they disappear in that room. The large Parisian apartment gradually falls silent. My father gets up from his chair and slowly prepares tea. The sound of cups and saucers being stacked on a tray signals that it's time to put the albums away and return to the living room. The mood is subdued and thoughtful. As if to remind my father of his duty, one child always ventures a timid "By the way, Grandpapa, where is your camera?"

Taking family pictures is only half of the story--looking at them completes the ritual. Two new books explore this perplexing visual duality by exposing--along with film--our most private voyeuristic attitudes. Who looks at pictures, and why?  Sally Mann's Immediate Family and Larry Sultan's Pictures From Home show us what we often fail to see in a photograph: the shadow we cast on a subject when we bend over to look at the picture.

Mann and Sultan point their camera at us by demanding that both viewers and reviewers take responsibility for interpreting their photographs. The new picture that emerges is often very different from the original.

In September 1992, the New York Times Sunday Magazine ran a story on Sally Mann's Immediate Family. On the cover was a portrait of her pre-pubescent daughter, Jessie, in a bathing suit. With her wet hair, pale skin and weary eyes, she looks cold and tired, in need of a towel, a hug and a snack. But the hostile look on her young face says "don't bug me." You quickly avert your eyes, to avoid having to take sides. To stay out of trouble with a child, never ask her what's wrong. But it's too late. You are involved. Suddenly you feel like an offender.

By allowing her young subjects to stare at the lens, Sally Mann turns the kids into observers and the unsuspecting viewer into an unwilling intruder. Her aperture is focused on the experience of seeing more than of being seen. Her lens is a dangerous two-way mirror. Her photographs should come with a warning label: "Being seen through the eyes of a child can be hazardous to your self-esteem."

The New York Times ran the photographs with its own imprimatur, an "endangered family values" label. Described as "disturbing", the intimate portraits of the artist's children were interpreted in the context of a mother's responsibility toward her family. The reviewer, a man, had been invited to Sally Man's Virginia's home where he observed the interaction between the kids and their mother. His report was not unlike that of a social worker assigned to investigate a child abuse case. His journalistic approach, in spite of its objectivity, turned out to be as "disturbing" as the photographs themselves.

Today, it's dangerous to judge pictures out of context. As a former art director, I know that, when laying out a story, you must beware of the ads. On the other side of the New York Times Sally Mann's cover photograph was a special gatefold advertisement for Revlon, a monstrosity featuring a series of portraits of top model's Cindy Crawford shown nude under a loose pink wrap.

Coincidentally, Cindy looked like Jessie: same wet hair, same bare shoulders, same angle, same sensual vulnerability. There was one major difference, though. While the younger girl was on the defensive, the older one looked totally submissive. You could measure the effect of puberty on the two models--one was not buying any of it, the other one could sell you almost anything.

By questioning Sally Mann's responsibility, but ignoring its own, the New York Times' review suggests that parents are the only people who can effectively protect a girl from sexual exploitation. After a certain age, she becomes fair game. How young is too young? The latest trends in fashion promote a "gamine" look.

In a recent issue, the same magazine featured a Gianni Versace ad showing three of the youngest models in the business, Shalom, Aya and Kate Moss--girls who are not yet sixteen--playing in what looks like a sand box. One of the girls is lifting her skirt, with legs crossed and a "Mommy, I need to go to the bathroom" expression on her face. What's the difference between this picture and "Blowing Bubbles, 1987", a photograph of Mann's two year old daughter, Virginia, reaching for what we assume is an embarrassing wet spot on her dress?

The difference is simple. Whereas the Revlon or the Versace ads are crude, Sally Mann's photographs are elegant. They are perceived as threatening because they express a self-confident and serious point of view. Her large-format camera is a sensitive and opinionated instrument that creates tension by emphasizing contrasts between light and shadow, foreground and background, stillness and movement. Her images are uncompromising statements that reinforce the commitment of the photographer and her subjects. There is a definite complicity between mother and children, and as a result, viewers feel like outsiders invited to watch but not participate.

Through her view finder, as through the looking glass, Sally Mann shows us the world through the eyes of her children. The polished surface of her books' printed pages reflects our uneasy adult faces. The graceful gestures of her naked daughters contrast with the clumsiness of our thoughts. There is a mounting sense of drama as the children get progressively older. Jessie looses her innocence. Virginia develops an inquisitive mind.

Like Emmett, Sally Mann's growing son, we too become increasingly more self-conscious with each image. We welcome with a sigh of relief "The Last Time Emmett Modeled Nude, 1987", a defiant portrait of the boy standing alone in the middle of a river. Journeying from page to page, we begin to accept, with the help of the children, our own loss of innocence and fall from grace.

Spooky, eerie and ghostly, Sally Mann's enigmatic pictures are burdened with an urgent beauty. But if you are angry, weary or frightened by old memories, don't stare at them too long. Like mood stones, the pristine photographs could tarnish in front of your very eyes. That's why the artist's children fiercely defend their mother's pictures from intruders by confronting the viewers with unequivocal integrity.

They seem bluntly determined to protect their mom with their frail bodies. And it works. Their undisguised love for the woman who cares for them protects them from our curious glances. The photograph titled "Virginia at 4, 1989" shows a stark-naked little girl--her trusting face makes her appear more modest than if she wore a white dress.

California photographer Larry Sultan's Pictures From Home is also a labor of love. The book combines Sultan's own photographs of his aging parents with transcripts of recent audio tapes and snippets of photographic archives--commentaries, snapshots, quotes, stills from home movies, publicity material and class pictures are pasted together in a seamless collage. "My father keeps asking me why I get all the credit for the pictures that he and my mother have made," Larry Sultan remarks in his acknowledgments. "It's a good question."

The question Sultan raises with this collaborative effort is the same question that confronts anyone who looks at Sally Mann's work. Who should be held responsible for a picture? The photographer(s), the subject(s) or the viewer(s)? Larry Sultan's parents, unlike Sally Man's children, feel violated by the scrutinizing presence of the photographer, but like Jessie, Virginia and Emmett Mann, they agreed to have their portraits published. Their protests were recorded and simply incorporated into the larger picture--into the post-modern mannerism of the contemporary scene.

Larry Sultan's photographs are classic "American Gothic" studies. They synthesize the dignified approach of Diane Arbus' portraits with the operatic style of Cindy Sherman's tableaux vivants. They are not extemporaneous shots, but elaborate set-ups, staged to dramatize an elusive feeling of intimacy.

The heroic portraits of Irving Sultan, Larry's father, are particularly successful--the backyard swimmer holding a blue plastic float, the despondent executive sitting on the edge of his bed or the indoor golfer swinging his club in front of the TV. "It's such a shitty swing that I cringe every time I see it." remarks the father. "...for the most part that's not me I recognize in those pictures."

But viewers are sure to recognize themselves in these pictures. All families are alike in their simple yet significant details. Sally Mann's willingness to show us the mess on her porch and Larry Sultan's fascination for his parent's garish wallpaper are the impressions that will endure. Loving pictures bring out the collective denominator, not the odd peculiarities in people.

Immediate Family  and  Pictures From Home are books that belong to all of us. It's our responsibility to look at them the way a mother looks at her children or the way a son looks at his parents--with abiding love and complete acceptance. 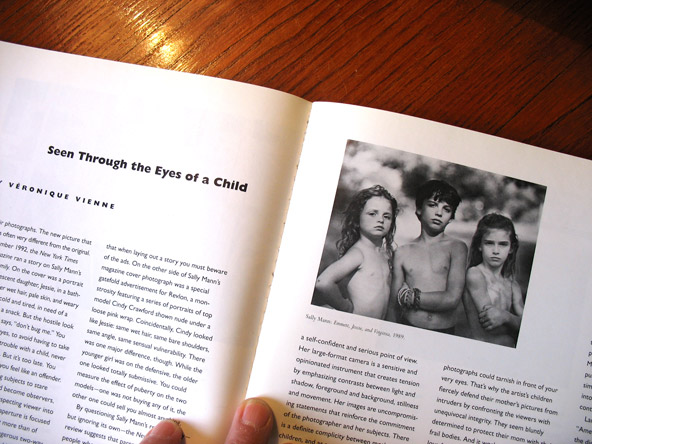 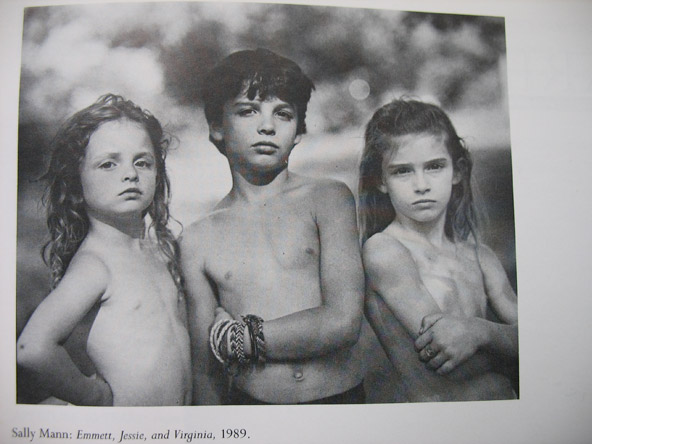 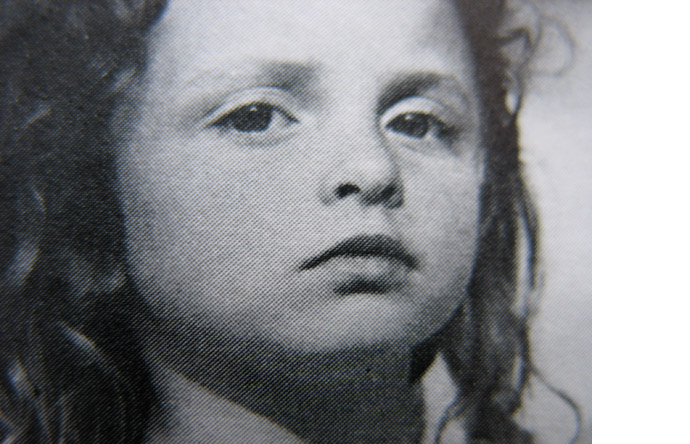 3/4 - Close-up from the Camerawork article 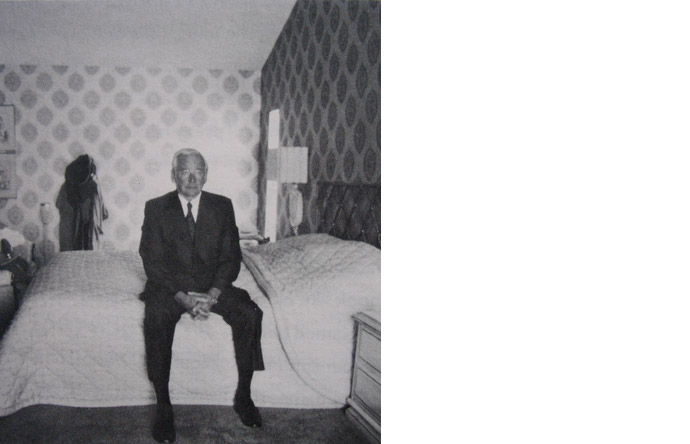