Last winter, as two major retrospectives on graphic designers Jean-Paul Goude and Stefan Sagmeister were drawing crowds at the Musée des Arts Décoratifs in Paris (with lines on weekends stretching on the rue de Rivoli), a more modest show at the Galerie Anatome, featuring the work of Pierre di Scuillo, was also attracting fans - albeit not as many.

The contrast between the high profile designers and low key practitioner worked to the advantage of the latter. While Goude and Sagmeister were jubilant, heroising the commercial dimension of their work, French type designer di Sciullo stood out as someone still operating outside the framework of platitudes.

First, di Sciullo is unambiguously colour happy. While most type designers believe that letters of the alphabet look their best in black, when their forms are as substantial as that of graphite molecules, cannon balls, coal pellets, anthracite rocks, or liquorice candies, di Sciullo thinks of typefaces as ethereal vibrations. His letterforms are musical notations, their shapes suggesting sounds. He uses all the shades of the rainbow to give letters, vowels and words a new resonance.

"The experience of reading aloud is what interests me," he explains. "I want words to be heard not seen." A musician as well as a designer, his colourful compositions are graphic expressions of auditory impressions.

In 2005, he created the poster for Ecrire à voix haute (writing aloud), an exhibition at the Ferme du Buisson art centre, a watershed event that ushered in a new trend among French graphic designers: an attempt to revive the oral tradition.

Di Sciullo's letterforms are awkward. He is the first to admit it. Their lack of fluidity not only gives them character, it also forces readers to slow down as they decipher the text. Colours are used to emphasise some strokes but not others. The words are fractured but glow like pieces of a stained glass window (playing with transparency is one of di Sciullo's techniques). You end up mouthing words in order to get their meaning. Like a kid learning to read, you experience the thrill of watching text turn into speech.

In fact, di Sciullo's approach is often childlike. He messes up words the same way he messes up letterforms. He is a master of spoonerisms, phonetic reversals and other forms of malapropisms. He likes to tease the brain as much as the eye. His witty typefaces, often derived from geometric forms, are most effective in large size - few are commercialized as text type - and they do wonder in declarative sentences.

In 2007, di Sciullo created Nimportenawak (anything goes) for a Nuit Blanche Paris installation. It was a 12-hour pasting marathon during which giants posters spelling out "bon mots" were glued on the four surfaces of a cubic scaffolding, in a continuous word-puzzle performance. It was so popular that over the years Nimportenawak has become something of a road show, a featured event at a number of outdoors festivals in France.

More recently, in May 2011, for a town-wide street fair at Villeneuve-sur-lot, di Sciullo hand-painted a series of signs that looked like protest banners. Their slogans played up word transpositions that lampooned the work ethics. "I needed to reconnect with spontaneity. I chose not to use my computer-generated type experiments," he says. "I wanted to take the time to form each words in such a way as to involve my entire body rather than just a couple of fingers taping on the keyboard."

But di Sciullo is not an artist, he insists. He describes his most radical work as mere experiments - as voice exercises. What about his Grandes vocalises, large watercolours displayed in a group show of multicultural artists? They are visual representations of the elocutions Prrr, Chf, Blbl, Gni, Kt, and eMne, he says. His typographical glass sculptures, many of them tributes to Georges Perec? They are 3D models of transparent vowels.

Even his conceptual magazine Qui? Résiste, which he publishes sporadically since 1983, is for him nothing but a chance to study various editorial formats. "My father is a painter. I know what I am talking about. I never want to be an artist - I never want to be part of the gallery system."

Important commissions - signage for the Forum des images, the tramway stops in Nice, the Centre national de la danse in Pantin, the Musée Champollion in Figeac, and for the BnF  Richelieu, the venerable Paris public library - are evidence of the high regard for him as a designer. Each project stands on its own, a typographical oddity that attracts the attention and holds it long enough to leave a deep imprint in the imagination.

In 2008, di Sciullo contributed a series of short video sequences to the French film Peur(s) du Noir - literally: fear(s) of the black - a portmanteau compilation of horror stories by the likes of comic book creator Charles Burns and illustrator Lorenzo Mattotti. Di Sciullo wrote and directed four two-minute sequences: abstract black & white computer animations in which spiky shapes morph into geometric patterns and serpentine blobs, a contemporary homage to Oskar Fischinger. His sequences are narrated by a woman with a rich and vibrant voice, alleviating his fear of the black in warm, audible tones - the next best thing to bright colours. 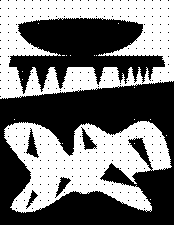 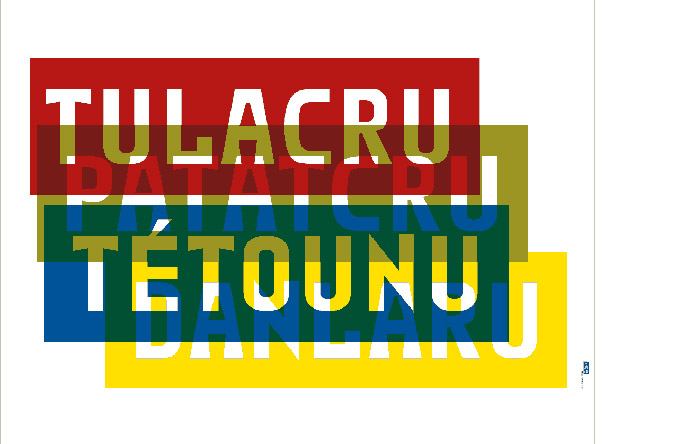 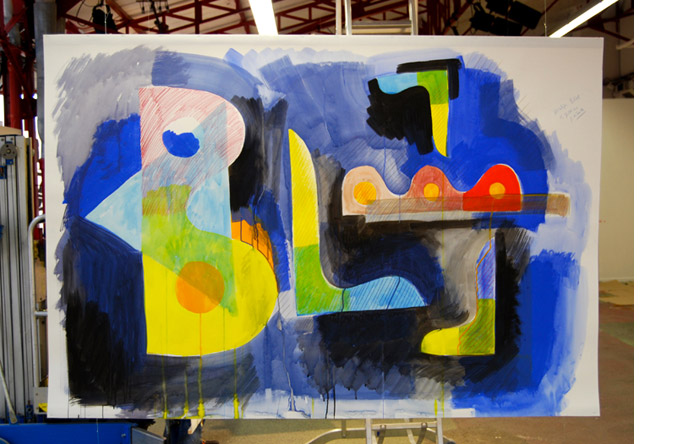 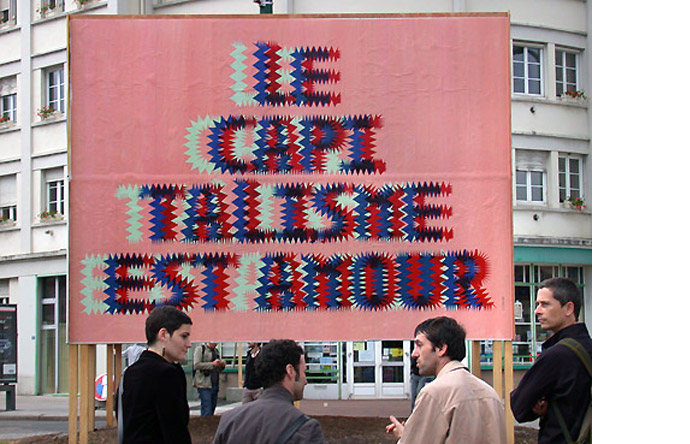 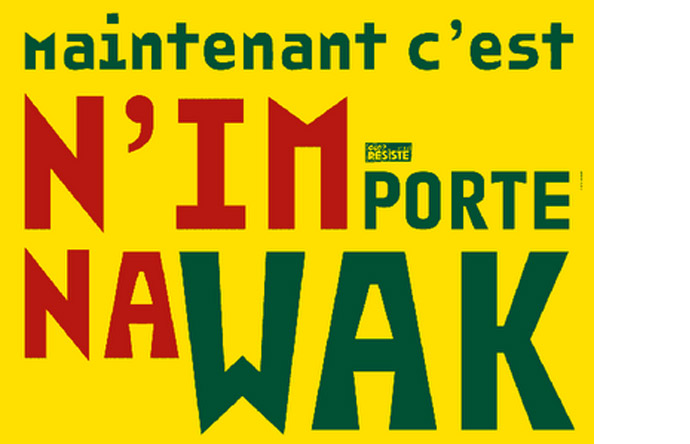 5/12 - "Now, anything goes" claims this poster. Graphic solescism are celebrated as an art form. 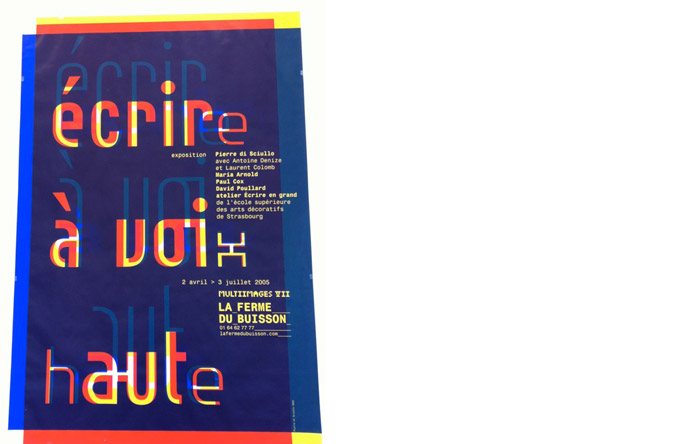 6/12 - Di Sciullo was one of the first graphic designers to promote a return to the oral tradition. 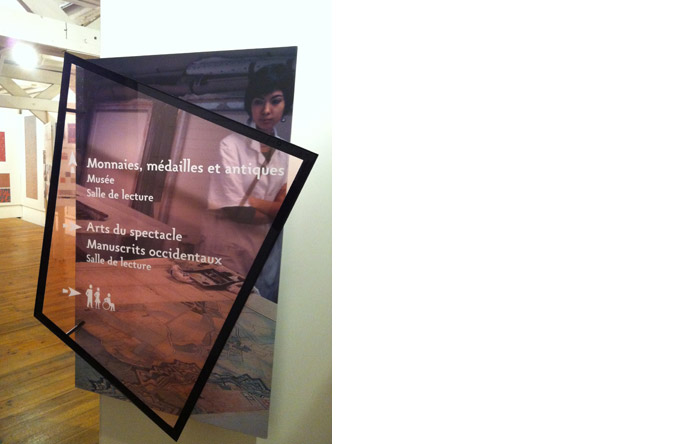 7/12 - Prototype of a wayfinding system for the BNF while the building is being restored. 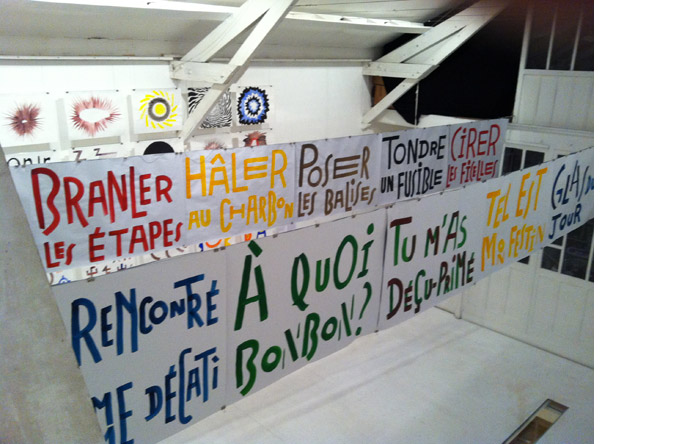 8/12 - Shown at the Galerie Anatome, these banners were first handpainted for a street fair. 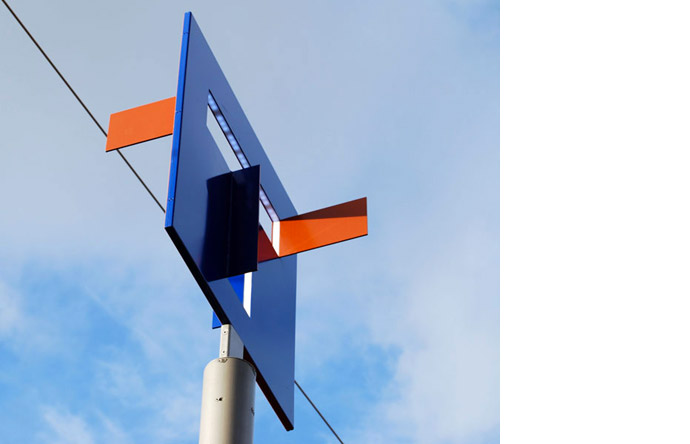 9/12 - Tramway signs for the city of Nice are blue and red glazed metal sculptures. 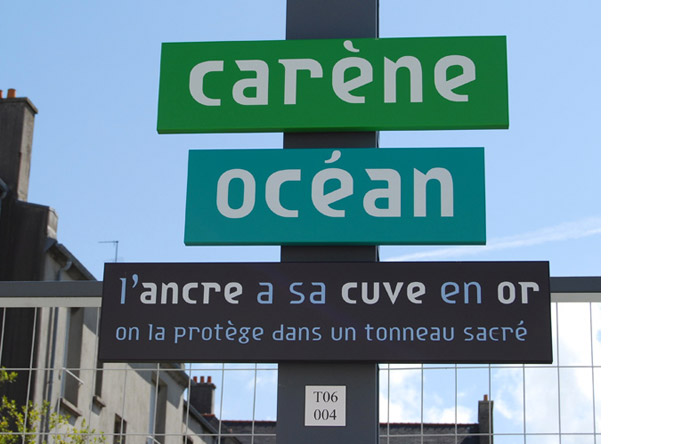 10/12 - A sign system, for the city of Brest, creates anagrams with the name of the tram line. 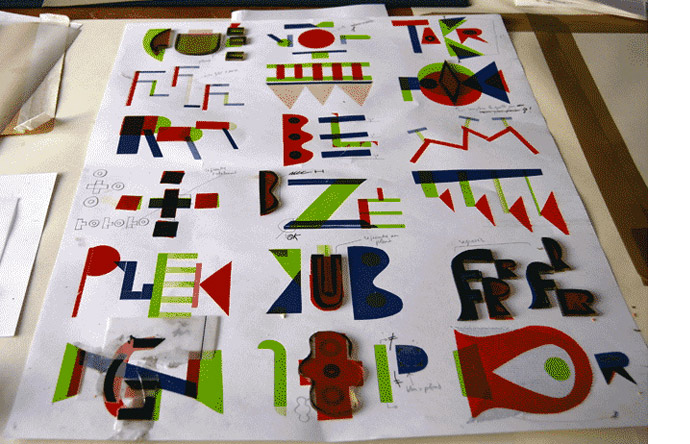 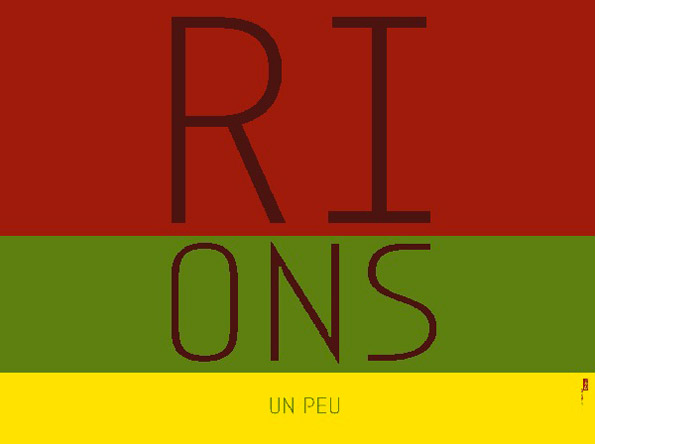 12/12 - Breaking up words, now a popular technique, was pioneered by di Sciullo.