With less color information to process, your brain can now concentrate on details, from every wrinkle on your skin to every speck of dust on the carpet.

In the antiquity, around the Mediterranean basin, the color blue did not exist. Historian Michel Pastoureau explains that people saw it — the Greeks and Romans were not visually impaired as some historians had suggested — but they did not perceive it as a color, nor did they have a specific word for it. So blue in this part of the globe, the sea and the sky looked white, gold, or red to them. For Olafur Eliasson, the 37-year old Danish installation artist whose main media is light and color, cultural blindness like this is just the sort of phenomenon he investigates. From his studio in Berlin, he designs environments that highlight (literally) the way the brain selectively edits visual information.

Eliasson’s art is an exploration of the physiological fact that the eye is not a mirror but an apparatus that generates vision; his pieces turn the observer into an active participant of the viewing process. “In this sense, Olafur Eliasson is heir to Marcel Duchamp who said that the spectator does half the work,” remarks Hans-Ulrich Obrist, curator of the Musée d’Art Moderne de la Ville de Paris. In 2002, the museum staged a major show in which Eliasson “put visitors through a series of experiences that affected their state of mind.” Each installation was “an invitation to examine how one felt in different situations.” The kind of heightened self-consciousness that Eliasson’s work elicits is what the artist calls “seeing oneself seeing,” a formulation he borrowed from light-installation pioneer Lásló Moholy-Nagy for whom the goal of art was to make us “feel what we know and to know what we feel.”

Eliasson has been working on this idea for more than 15 years. One of his early installations, in 1993, for a group show at the Kuratorengruppe in Copenhagen, consisted of a lamp illuminating a fine spray of atomized water, creating the fugacious apparition of a rainbow in the mist (Beauty). For him, the optical phenomenon (the result of a refraction taking place in the eye of the spectator not in the room itself) served as a demonstration that what we see is a visual construction. For visitors, though, what was most striking was not the experiment itself, but its in-situ dimension. Placed in front of a massive door, the quivering rainbow was an impenetrable barrier, its insidious humidity as much of a deterrent as the solid portal it guarded.  “Eliasson’s concern is the relationship of the viewer to the work and to the space it inhabits,” says architect Richard Gluckman, best known for his work for the New York’s Dia Center for the Arts. “He manages a careful balance that privileges the viewer not the architecture.”

Using light as others might use bricks and mortar, Eliasson turns luminosity into an architectural element. Often, water is the facilitator. He partitions space with curtains made of drops of water frozen by strobe lights (Your Strange Certainty Still Kept) or he converts fog into a building material, neatly carving a cubic meter of emptiness by slicing through a foggy room with spotlights (1m3 Light). Even when his light constructions seemed to float in darkness, as was the case with Meant to be Lived in, a site-specific art piece installed in a cantilevered villa in Pasadena, architecture was the critical consideration. Covering the floors and windows with a squishy black rubber that not only blocked the light by also the stunning views, Eliasson drew attention on what one expects when stepping inside a modernist house. The disconcerting cave-like setup was as much part of the experiment as the optical devices and prismatic projections exhibited in it.

“Eliasson responds to a specific environment,” says MoMA director Glen Lowry. “Each of his installations is totally unique because each is designed for a unique location.” But sometimes the location is the brain of the viewer, as when Eliasson bathes a room or a corridor in yellow light, using low-sodium bulbs that render all other colors invisible. With much less color information to process, your brain can now concentrate on details, causing everything to become sharper and more distinct, from every wrinkle on your skin to every speck of dust on the carpet. By turning an ordinary hallway into a hyper-realistic environment, the occasional illusionist gives his audience a chance to marvel at the fickleness of their vision. “As far as I am concerned, the quality of an architectural space is in its ability to suggest self-reflectivity,” says Eliasson. “I try to build installations that let you to see yourself rather than see the installation.”

For the 2005 Venice Biennale, Eliasson and London-based architect David Adjaye conceived a windowless room with a false horizon drawn in light all around. It was a mere slit in the wall placed at eye level, but so compelling is our constructed relationship with the concept of horizon (the separation between heaven and earth!) that reconciling the illusion of infinite distance with the feeling of being boxed-in was a challenge. Trapped between two impressions, visitors shifted their perception back and forth, aware of their subjectivity, discomfort, and delight. Eventually they had to engage with the piece as co-authors in what Eliasson describes as “a reversal of subject and object: the viewer becomes the object and the context becomes the subject.” He adds: “I always try to turn the viewer into what’s on show, make him mobile and dynamic.”

The demarcation between what’s above and below is a recurring motif in Eliasson’s work, with mirrored ceilings his tool of choice. His most magisterial use of this scheme was at the Tate Museum in London, where, in 2003, he doubled the height of the Turbine Hall—the museum’s majestic lobby—filling it with drifting patches of fog that blurred the boundary between the actual space and its vertical reflection (The Weather Project). But the signature element of this installation was an artificial yellow sun — the only source of light of this Film Noir setting. Half a glowing disk stuck to the mirrored ceiling, the oversized globe was obviously a makeshift orb, just enough of a visual support for viewers to suspend their disbelief and bask in its light. A popular destination in London that winter, the Tate museum was transformed into a virtual beach, with people lying down on the floor to catch their reflection way up there, their silhouette a speck no larger than that of a migrating bird.

Eliasson’s installations are designed to encourage people to see space as unfolding in front of them. He wants you to become aware of the temporal as well as the spatial dimension of your singular experience, a concern he shares with architects: “We all know that the manipulation of light can help choreograph the experience in space and emphasize movement as well as stasis,” Gluckman says. But Eliasson’s work is essentially subversive: it is a deliberate refutation of the modernist assumption that individuals are measurable entities who negotiate space and time according to predictable parameters.

One of his most recent pieces is in fact a direct attack on the universality of the white cube (The Light Setup). Set at the Konsthall, in Malmö, Sweden, the 35,000 square-foot exhibition was an empty hall illuminated by 6,000 fluorescent lights behind giant screens — some on the walls, others over windows and on the ceilings — programmed to deliver different shades of white light, each affecting the way people moved across space. “I developed a system that allowed me to take a spectrographic reading of the exact quality of the white light in different parts of the world, at different hours of the day, and during different seasons,” explains Eliasson. Much like a perfumer mixing high-tech fragrance notes replicating natural ones, he was able to create visual cocktails of ivory, chalky, icy, creamy, milky and pearly lights (60 altogether), debunking the idea that there is such a thing as “pure” white.

“Olafur Eliasson’s pieces are very very very carefully thought-out installations,” insists Lowry. “He is always thinking about larger issues, and how they manifest themselves in space. But the intellectual underpinning of his work never detracts from the fact that the result is beautiful.” 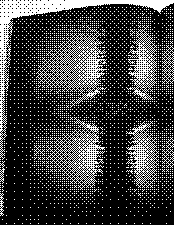 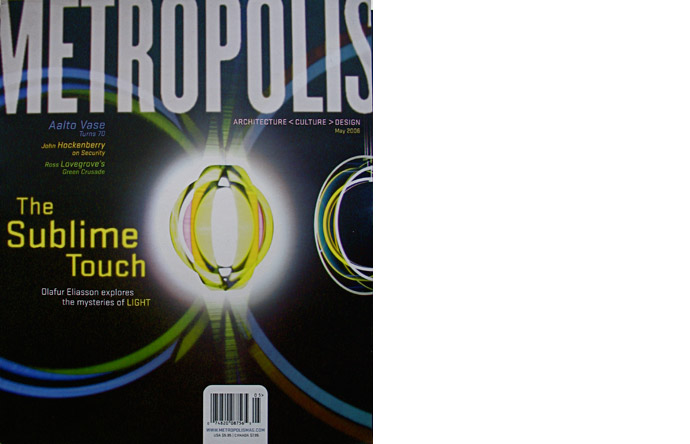 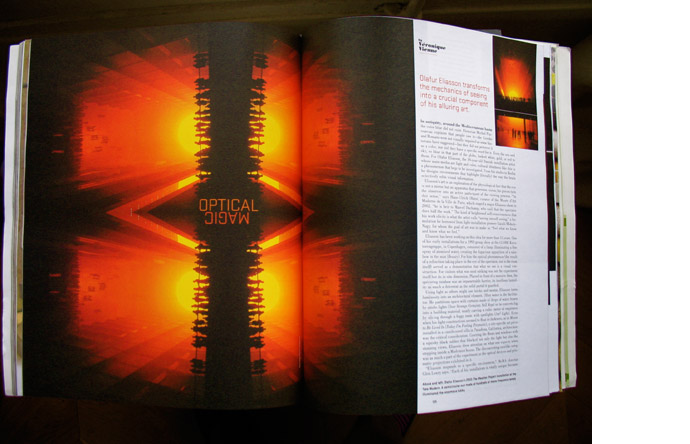 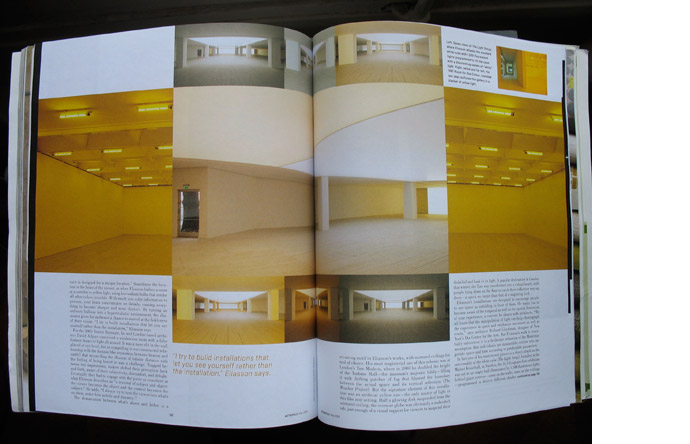 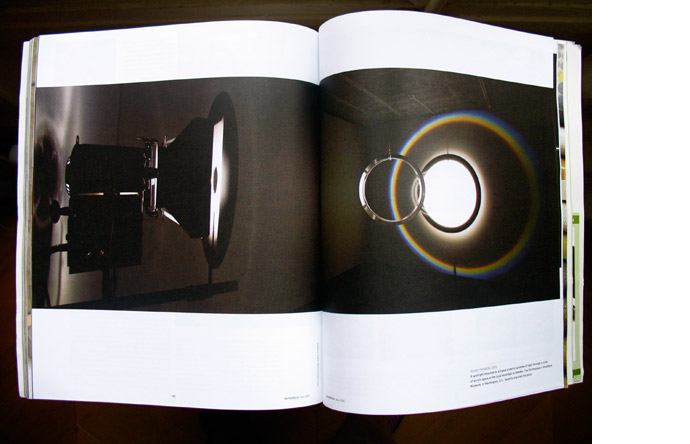 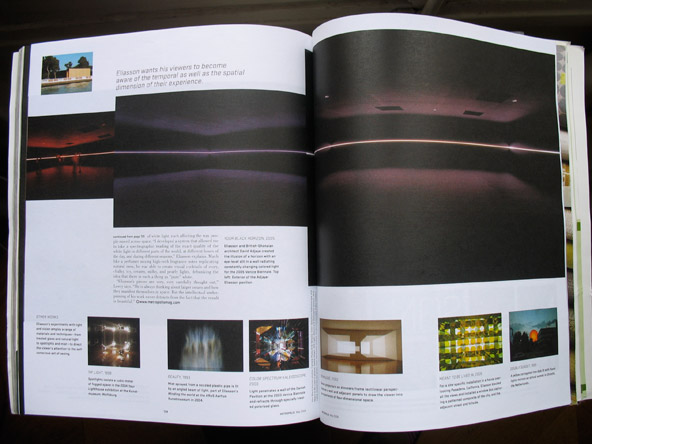 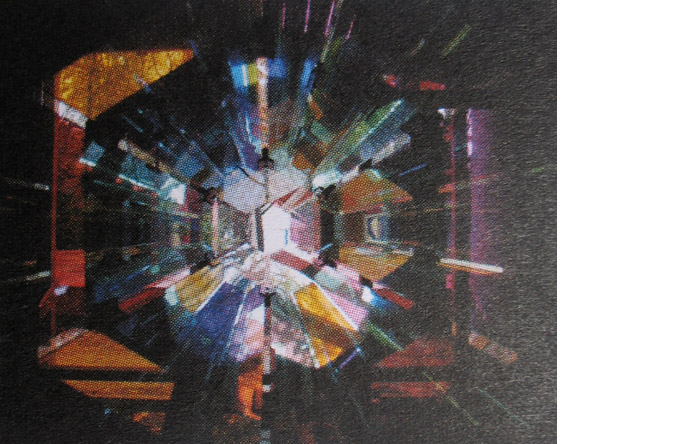 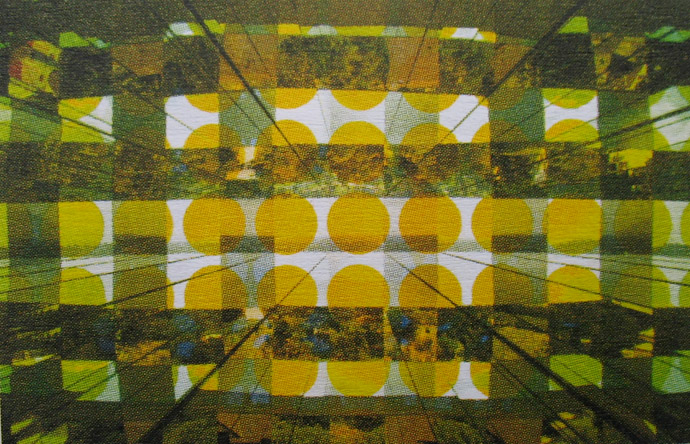 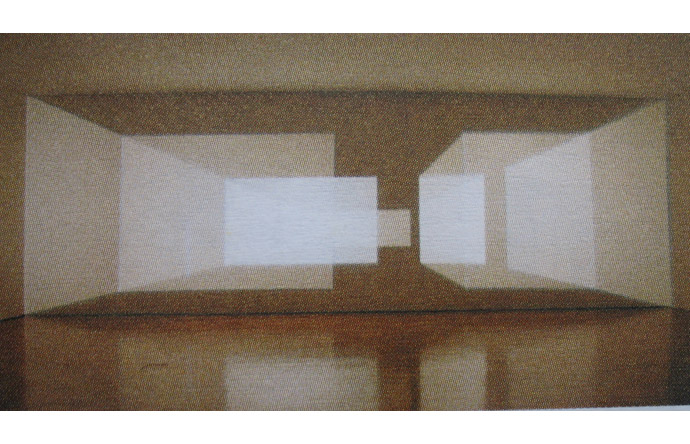