How many times did I pick up the receiver from him before I figured out what was behind his sheepish grin?

The rodent, holding the receiver in his right hand as if it were a lamp, is for me as much a symbol of freedom and hope as this other American icon, the Statue of Liberty.

An American classic, my 1976 deluxe push button model is set, like Liberty, on a monumental base, a large faux-wormy-walnut stand. Unlike the most recent Mickey Mouse phones that are designed to be portable and compact (the latest electronic Mickey keeps the receiver in his backpack), this telephone is heroic in proportions. Twelve inches tall, the cartoon character has presence. There is nothing tentative about him.

You can tell that the Disney people knew their Mickey. To draw him in action, and give him a believable personality, they had to first invent his physical attributes, which meant, among other things, establishing his precise weight, his exact flexibility, his buoyancy. Flattened in drawings,  silk-screened on watches or tee-shirts or molded in hard plastic, his rubber-like body keeps his specificity.

My Mickey looks limber and springy. His ears stand up at a unequivocal angle. His snout sticks out expressively. His big head, angled sideways and upward as if to seek approval, throws his body off balance, and as a result his left leg is slightly bend. As any little boy would do when tilting his head to the left, Mickey has shifted his tongue to the right, instinctively re-establishing his sense of equilibrium. He looks animated, vibrant and alive.

Unfortunately, my Mickey is physically fit but emotionally insecure. Sure, he is cheery with innocence and good will. He stands proudly, his left hand on his heart, holding the phone with the eagerness of a dog who just fetched his bone. But there is a questioning look on his face. Although there is enough room in the stand to house an answering machine, this Mickey is not the kind of fellow you would want to trust with your messages.

"You deal with this call," says his body language. "You are a grown-up woman, I am just a dummy." I must have picked up the phone from him thousands of times in the last 16 years, and as I talked, looked deeply into his trusting face before I could figure out what was behind that silly grin.

Only recently did I realized that under his white mask, Mickey is hiding the body and the soul of a small black boy. Created in 1928, the original mouse was an endearing little rascal, a scamp who played tricks on others. In the early days, he was not a symbol of respectability. He had stolen Charlie Chaplin's oversized shoes and Step'n Fetchit's white gloves. He was a jack-of-all-trades, a jazz musician, a comedian, a grocery boy, an aviator. In fact he looked a lot like a young Michael Jackson with two gloves instead of one, and like the Rock'n Roll performer, he was split between a black and a white identity. But back then he was young and full of energy. He had inherited an enterprising personality from his creator, the 26-year-old Walt Disney.

By the mid-thirties, Mickey Mouse had become a national hero. But as he gained in popularity, Mickey Mouse had to be sanitized. If he misbehaved in a cartoon, angry letters from irate citizen and organizations would arrive at the Walt Disney Studio. As Mickey learned to become a goody-two-shoes, other characters had to provide comic relief. Pluto, Donald Duck and Goofy, troublemakers all, became his companions.

By the end of that decade, the Three Little Pigs, Snow White and Pinocchio had been introduced by Disney Studio, and they took some more pressure off Mickey. A little later, Dumbo and Bambi, Cinderella and Peter Pan were added to the pageant. The rest is history. But no Prince Charming, Big Bad Wolf or Fairy God Mother could ever replace Mickey. He was the all-American hero. He was the archetype. Mickey was the key to Disney's success.

A hero taken into custody

Then, in 1940, something tragic happened. Trapped by his own notoriety, unable to evolve as a character, Mickey-the-troublemaker was terminated. The Sorcerer's Apprentice, released as part of Fantasia, was to be his testament. In the last few seconds of the nine minute animation, Mickey Mouse returns the magician's hat to his master the sorcerer, becoming de facto a deflated hero. The chastened look on his face says it all. His dream is over. He has no more power, no autonomy. The Wizard, Walt Disney, takes it all away. It's a cruel moment in cartoon history. From there on, Mickey will be cast as mere product, a commercial property.

Today Mickey Mouse is a prisoner in his own kingdom. He walks around the streets of Disney Land, Disney World and EuroDisney under surveillance. The sixty four year old cartoon character is never allowed to speak. An appointed "minder", equipped with a walky-talky, "protects" him. Take his picture, but don't expect him to say anything. One word, and he looses his job.

But Mickey Mouse cannot be silenced. He is on my phone. Take his call, please. He wants to talk to you. 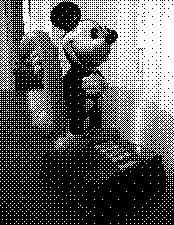 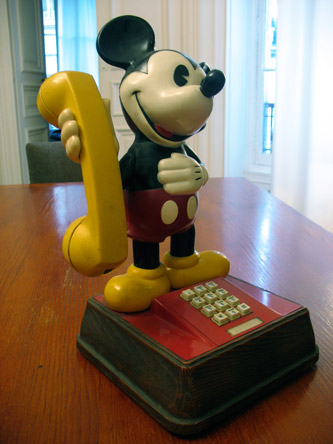 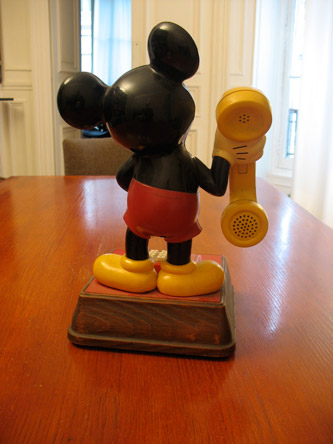