When fake marble columns, pseudo-cornices and mock porticos became standard features in corporate headquarters across America, I knew that misfortune was in the air.

The Holy Grail. The Fountain of Youth. Perpetual Movement. It takes a mortal to invent the concept of Eternity. The American version of the Quest is the Pursuit of Happiness. The Italians, like their ancestors the Romans, strive for Artistic Perfection. My uncle, an architect, is obsessed with the Greeks' Golden Section. He believes in Absolute Geometry. When he was young, he tried to invent the Universal Box.

"It could be a chair, a table, a container, a bucket or a hat," he used to tell me. "Multiply the box and you can build the most beautiful house. Sub-divide it and you can design anything -- a spoon, a lamp, even a pair of shoes." He would draw a square on a piece of paper and show me all you can do with that one perfect shape. Stacked, twisted, folded, cut or angled, the same square would dance in front of my eyes and turn into a cube, a spiral, a cylinder or a pyramid. As nimble as a cartoon character, the rigid square was capable of a life of its own.

My uncle was a fervent modernist. He thought that modular design, with its rigorous aesthetic, would help us solve the problems of the twentieth century. Production problems: one single mold could be used to manufacture hundred of products. Communication problems: one unique range of sizes would minimize explanations and mistakes. Cultural problems: a shared passion for geometry would provide the basis for a universal language system.

He was turned toward the future and did not like reference to the past. I remember him ripping the ornate ceiling moldings, scrollwork and decorative window frames in the 18th century apartment he had rented in Paris. He tried to convince my mother, his sister, to tear down the "ugly" 15th century fireplace with its "obscene" caryatids in the dilapidated manor she had bought in the South of France.

As you might have guessed, my uncle is French. He hates historical trivia like only a Frenchman can. If you grow up surrounded by antiques, you crave novelty. But unlike the "Mon Oncle" character in the famous Jacques Tati film, my uncle loathes trendy modern gadgetry. Heir to the Bauhaus, he is a builder-philosopher, a poet of numbers, and a purist -- he is a Le Corbusier's fan.

A visionary French-Swiss architect, Le Corbusier developed what he called the Modulor (Modul-or i.e. Golden Module), a proportional system based on modular sub-divisions that allowed him to design an infinite number of harmonious architectural variations on a single mathematical theme.

Although he is regarded as one of the founders of modern architecture, Le Corbusier's theories are very different from what we now call modular thinking. Most contemporary modular systems today are based on the multiplication of identical units, resulting in a repetitive pattern. Le Corbusier's Modulor is based on a division -- the theoretical division of the human figure into its proportionate components. "To anyone but a Frenchman this sort of [distinction] might seem pedantic to the extreme," noted Peter Blake in The Master Builders. "Indeed, anyone but a Frenchman would probably be incapable of achieving a Modulor system."

The secret of the Golden Section

Born French, I had no concept that things could be made simpler. I liked intricacies. Following in my uncle's footsteps, I studied architecture. I went to the Beaux-Arts school in Paris, hoping to discover the secret of the Golden Section. But in the early Sixties, Le Corbusier was still considered an Enfant Terrible in French academic circles. Modernity was frown upon. Instead of studying mathematics, I had to learn to design dainty neo-classical buildings -- Baroque gazebos, Italian palaces and Victorian pavilions. I spent hours learning to draw details of the Ionic, Doric and Corinthian columns my uncle was so busy tearing down, literally and figuratively speaking. In the middle of my second year, I took a semester off and came to New York. It was, of course, a revelation.

Forget the subtle geometry of abstract spatial relationships, the aesthetic beauty of pure forms and the intellectually satisfying ordinance of the Golden Section -- this place was wild, intoxicating and overwhelming -- this place was a modular jungle. I fell in love with New York because it was a faulty mathematical proposition. The city was more than the sum of its parts. The sheer power of chaotic multiplication swept me off my feet.

Modular design, American style, is almost a negation of its European counterpart. "Corbu became convinced that some 'American gangsters' were trying to steal his Modulor by setting a company called something like Modular Structures," recalls Blake. "When Corbu showed the Modulor to the late Albert Einstein, in Princeton, Einstein told him that this was 'a range of dimensions which make the bad difficult and the good easy'."

What Le Corbusier did not understand -- and what Einstein very diplomatically did not tell him -- is that the universal appeal of American design is its cheerful lack of pretension. In America, the bad is easy and the good is difficult. We all love Manhattan although we all know that for one elegantly designed Seagram Building, we have to endure dozens of gaudy Trump-like towering infernos.

"Modern" architecture in America is not a native phenomenon. Left to themselves, American architects are quite lyrical. Louis Sullivan's decorative Art Nouveau and Frank Lloyd Wright's vernacular Prairie Style are genuine examples of truly American modernism. If architects like Mies van der Rohe and Marcel Breuer had not emigrated to the United States, Sixth Avenue today would probably be a different boulevard -- a visionary concourse right out of the 1893 Chicago's World's Fair.

Like American modern architecture, American modular furniture is not strictly an American invention. The idea was popularized in the States a full twenty years after Marcel Breuer's first modular prototypes had been produced at the Dessau Bauhaus school in Germany. In 1946, Harvey Prober, a self taught designer with a small Brooklyn factory, introduced what he called a "Nuclear" seating group. But his modular furniture were nothing like Breuer 's austere tubular steel designs. The U.S. version was user-friendly, featuring concave, convex, rectangular, wedge-like and circular upholstered sections. It was an instant sensation. The post-war years had signaled the end of the so-called glamorous Forties. The Fifties, synonymous with middle-class prosperity, were going to be casual, open-ended and easy. The American public, at long last, seemed ready for "modern" innovations.

Modular furniture suggests faith in the future. Acknowledging a need for flexible seating arrangement implies that you welcome potential change. Harvey Probber sold a concept more than a thing -- versatility, choice, options. This is the land of opportunity, somebody's gotta furnish it.

Modular furnishing revealed itself to be too cumbersome for everyday residential use. It looked better in pictures than in reality. Magazines featured trendy interiors with curved sectional sofas wrapped, like lazy snakes, around storage cabinets, planters and coffee tables; Advertisements showed formidable wall units incorporating entertainment centers, color television sets and full bars. But for most Americans, this was too radical a change. Modular furnishing was most popular with movie stars.

Few individuals were able to handle the challenge of modularity, but corporations thrived on it. With the addition of partitions, shelves, files cabinets, optional features and easy upgrades, modular units, a.k.a contract furniture, quickly became synonymous with office environment. As businesses were booming, so were the contract furniture companies. Knoll, Herman Miller, Steelcase and Stendig became industry leaders by defining modular designs with a strong signature style.

The rise of a mid-managerial class in the U.S. in the Sixties and Seventies parallels the development of a modular mentality. But the return to individual values and the glorification of personal greed in the Eighties heralded the end of pure geometry. The post-modern movement, with its eccentric historicity, was first and foremost an anti-modular trend -- in other words, it was an anti-middle class trend. When fake marble columns, pseudo-cornices and mock porticos became standard features in corporate headquarters across America, I knew that misfortune was in the air. The office environment looked like a theatrical set. I had the feeling that we were preparing the stage for the last act of a tragic play. And indeed the Reagan years delivered the Coup de Grace  -- today the American Dream is but a shadow lurking behind the corporate scene.

During the post-modern years I kept wondering how my uncle -- a man who used to break into hives in the presence of fake wood -- was surviving in this strange anti-architectural climate. But I was too busy to track him down. Finally, the last time I was in France, I got his phone number and went to see him in his newly renovated house in the Vallée de Chevreuse, an exclusive suburb outside Paris. Every home in the quaint village of Gif-sur-Yvette, where he now lives, had been restored recently to recapture its original picturesque turn-of-the-century charm. The area looked like Euro-Disneyland, minus the dress code.

My uncle's house, at the end of a quiet alley, was white-washed and unassuming. I rang the bell. He came to the door, a 6'6'' giant with thinning white hair, clad in a pair of blue industrial overalls. Behind him the house glowed like the inside of an empty sea-shell. It has been gutted out to bare its modest structural soul -- a straight staircase, a simple fireplace, a couple of walls. It was furnished with modular furniture, elegant prototypes that were, as far as I could tell, his latest variations of the Universal Box. I noticed a large table, eight witty chairs, a discreet wall unit and two comfortable lounge chairs. The overall impression was almost medieval -- yet pristine.

We had a lot of catch-up to do. But my uncle, a practical man, wanted to talk about joints. "Modular design does not work in most cases because designers don't understand how to make joints, " he told me. "Not just physical joints, but functional joints as well..." I had to sit straight and conjure up my French mind -- we spent the rest of the afternoon embroiled in an argument, trying to define the shape of things to come. What is the difference between interior space and exterior space? What makes more sense, proportions or harmonic relationships? What is most useful, "finalized" or "non-finalized" objects?

When I left his house -- a laboratory of modularity -- I felt I was going back into a world obsessed with its past, a world reluctant to imagine Tomorrow.  I was confused as well, as if this visit had taken me back in time, to the glorious days of the Bauhaus. It is paradoxical -- but when you try to imagine the future, you conjure up images that come from the past.

But just wait.  The year 2,000 is around the corner. That corner is a joint -- a link, a nexus, a junction.  According to my uncle, modular design is magical because it reveals spiritual connections. I held my breath. For a brief moment I was able to conceive of my life as a transcendental in-between space, a joint linking two golden section of Time. 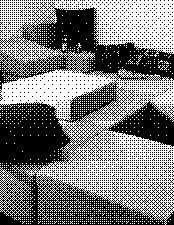 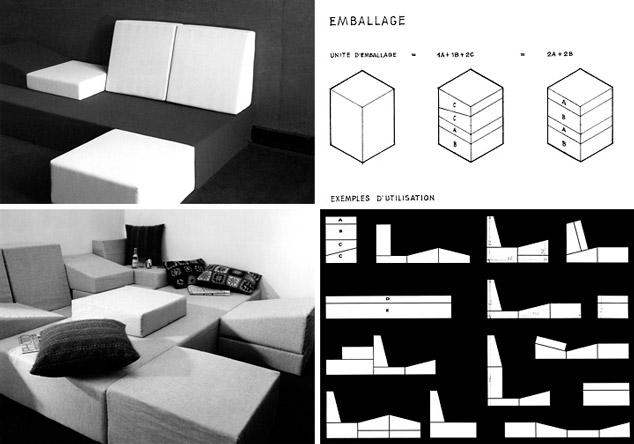 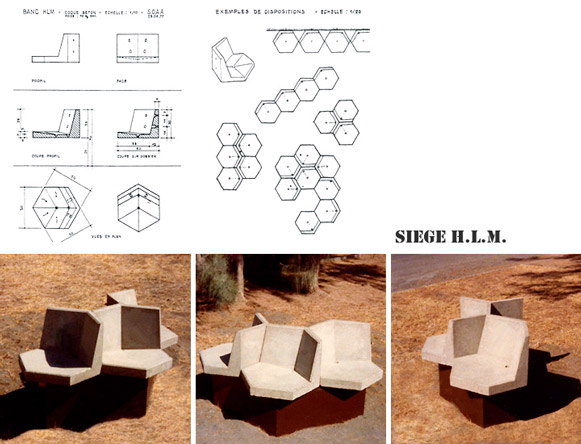 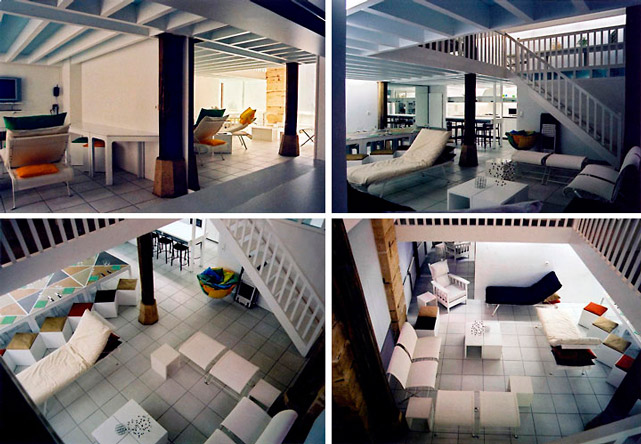 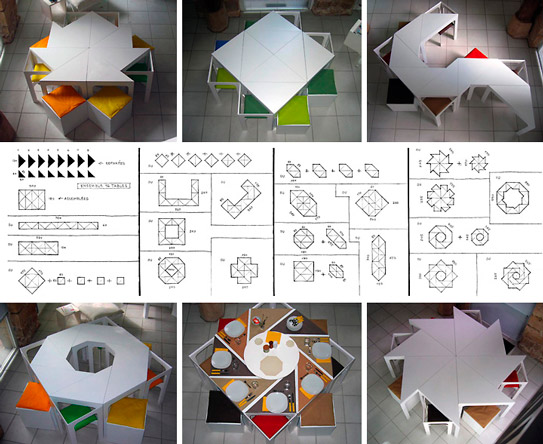 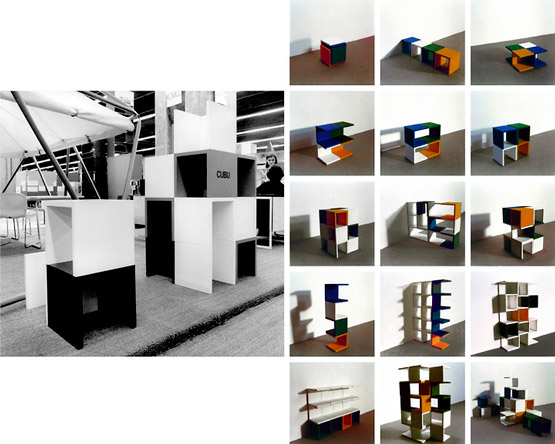