Impressions On the Retina

Fanette Mellier: is she a graphic designer?

In the last 10 years, Fanette Mellier has emerged as one of the most engaging graphic designers in France. So fresh, so clean, so colorful, her work stands out as the direct manifestation of the prodigious attention she puts into each step of the production process.

Fanette Mellier’s studio is located on the edge of the Paris, in an eerie part of town known as “Les Maréchaux.” All around the French capital, near the beltway, the urban fabric loosens up, the streets become wider and the sidewalks look like esplanades. While trying to negotiate the crosswalks that straddle this unexpected divide, pedestrians in a hurry, such as myself, can be momentarily disoriented by the glare. Why do Parisian “graphistes” always seem to live at the end of the world?

Truth be told, as a professional pursuit, “graphisme” is off the beaten paths.

In France, there are two kinds of graphic designers, but unfortunately there is no English word to help differentiate them. On one side are young professionals who strive to be problem solvers like their American counterpart. On the other side are the “graphistes” — a more radical breed of designers who practice their craft as authors. Bridging the gap between the two approaches is not unlike trying to cross the boulevards des Maréchaux — it is a bit tricky. On which side of the professional divide is Fanette Mellier?

Born in 1977, she belongs to a generation of practitioners who adopt international standards and call themselves graphic designers. However, the way she works, with an emphasis on experimental projects, would suggest that she is a “graphiste” at heart. To avoid a blunder, I ask her. She feels comfortable with both terms, she says, and goes back and forth between the two, on some day focusing on her clients’ demands, on other days taking the lead to drive a project in a more personal direction. In other words, she works both sides of the street, in a no man’s land not unlike the neighborhood where she lives.

Authorial work by designers is a murky notion, one that suggests that the author is more an artist than a specialist. However, as an author, Fanette Mellier is neither one nor the other. A more appropriate analogy would be to compare her to a lab technician. When she describes the way she works, she focuses on how rather than why. Even though the step-by-step process interests her more than its outcome, she seldom fails to produce exceptional design solutions. Case in point, two examples randomly selected from the impressive list of her recent projects.

The first one is a book, Au soleil (in the sun) published in 2015 by the Editions du Livre, as a sequel to Dans la lune (in the moon), published two years earlier. It is a square album that features a round circle — the solar disk ascending in the morning sky. As you turn the pages, successive layers of ink accentuate, or, on the contrary, soften the contours of the sun, tracking the changes in its appearance with each passing hour.

No effort was spared to visualize the various haloes of the celestial body. Chromatic variations, minutely calibrated on the printing press, replicate what no one can see — since looking directly at the sun would cause irreversible damage to the cornea. A formal exercise, Au Soleil is also a metaphor for what graphic design can do: make the invisible part of a process visible to the naked eye.

Just as characteristic of Fanette Mellier’s uncanny sensibility is a catalogue for an exhibition of the work of African contemporary artists, published by a French cultural institution, the Frac Aquitaine, in 2015. A cloth-bound hardcover, the catalogue is protected by a thick clear plastic cover silkscreened with geometric patterns reminiscent of woven designs in traditional Sub-Saharan cultures. That’s the only visual reference to the continent. Fanette Mellier avoids further stereotypes, such as the typical greens, ochers and browns usually associated with Africa, using instead pink, navy blue, magenta and turquoise. By subverting our expectations, by debunking our visual conventions, she challenges more than five centuries of colonial oppression.

In 2008, while on a grant from the Centre International du Graphisme in Chaumont, France, Fanette Mellier began to affirm her original point of view. Asked to design the signage system for the graphic design festival, she came up with “Circus”, a series of white billboards on which mysterious words were spelled out with diamond-shaped motifs arranged on a spider-webbed diagonal grid. Displayed on old walls around town, or leaning against fences in nearby fields, the circus-colored posters enhanced their environment, turning indigenous locations into oddly contemporary settings.

That same year, she designed a number of books that were, for her, an opportunity to deconstruct reading, and turn text into a typographical material as malleable as modeling clay. Most remarkable is probably Bastard Battle, by Céline Minard, an essay printed in 3-color black — yellow, cyan and magenta. Rainbow colored special effects are introduced here and there, like watermarks gone haywire. Uninvited typographical guests, in the form of gothic characters, worm their way inside words. Pure color pigments accumulate in the gutter, like dust at the bottom of a pocket.

Designing letterforms was next. Fanette Mellier soon began to create special alphabets. “Bubunne,” “Cartel,” and “Parc Saint-Léger,” were developed for specific assignments — a film title, the graphic identity of a cultural association, and the signage system for a contemporary art center. All these letterforms are structurally transparent: they are the expression of a simple set of typographical rules. When you read, you not only decrypt a language, you also decrypt the though system behind it. To this extent, Fanette Mellier’s letterforms function as graphic ciphers.

The temporal dimension of the gaze

How much time do readers spend looking at a page or a poster is a concern for all graphic designers, but for Fanette Mellier it is the focus of her research. Better than anyone else, she knows how leave on paper, but also on the retina, a sequence of visual impressions. Looking at her work is not unlike opening a perfume bottle. The forms and the colors evaporate like so many olfactory notes.

Her “Papillon” poster is an example of how she manages and controls the duration of the gaze. The first glance reveals an oversized color chart — with the butterfly far less visible than the vibrant colors of its wings. Slight irregularities in the tints attract your attention, and as you lean over to check it out, you take in the entire picture in all its complexity. Only then do you pull away from the image, somehow wiser for it, and feeling more alert than you did a few seconds ago.

“I try to plan in advance how people will take possession of a poster, a book, or an installation,” she says. To slow things down a bit — and make sure that the pleasure of discovery lasts a little longer — she intensifies the experience with added details: gilded edges, folding patterns, pages that are left uncut, discreetly embossed motifs — and her trademark, fresh colors that never fail to surprise and delight.

Fanette Mellier’s color sense is no accident. Her understanding of color theories is practical, rooted in her experience producing high quality printed matter. She is finicky when it comes to paper coatings and fabrications, ink and varnish characteristics, or special printing techniques. Always present on press checks, she has acquired an impressive knowledge of how colors react to each other when layered or set side by side. With her projects often stemming from personal investigation, she makes sure that the end product reflects her engagement and convictions. Leaving nothing to chance, she takes responsibility for every production choice along the way.

Some of these choices can involve others: clients, printers, publishers, but also the artists, writers and poets with whom she collaborates. Their talents overlap with hers, the same way colors and printing techniques overlap in her work to create unusual design pieces. But the final result can never be completely predicted. “It’s never over until it’s over!” she exclaims, her sense of wonder tinged with a touch of frustration.

However hard she tries to imagine in advance the kind of impression she’d like to produce, it only happens laboriously, lovingly, step-by-step, as she fashions the object that will deliver this impression. 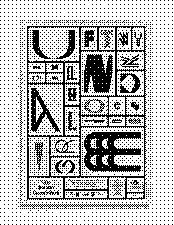 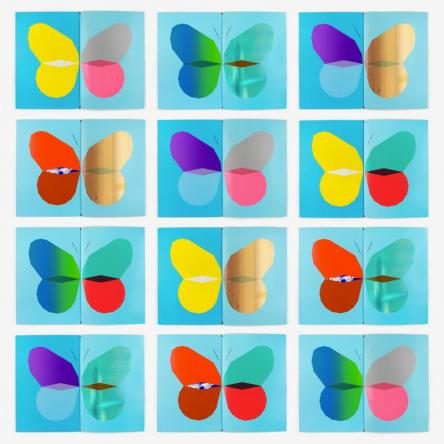 1/8- The pages of the book "Le papillon imprimeur" are printed using different techniques. 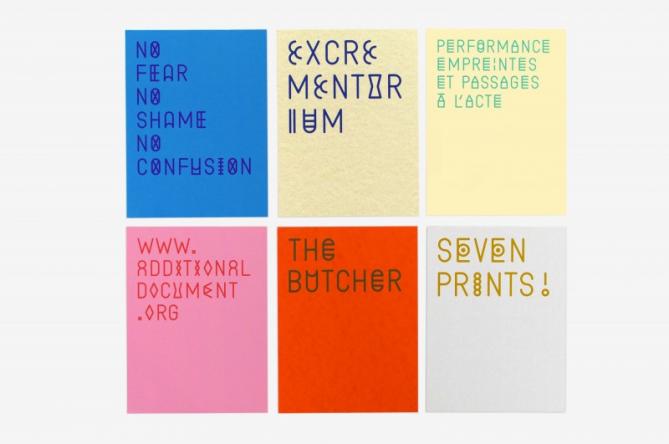 2/8- Cartel is an original alphabet in which vowels become decorative cryptograms. 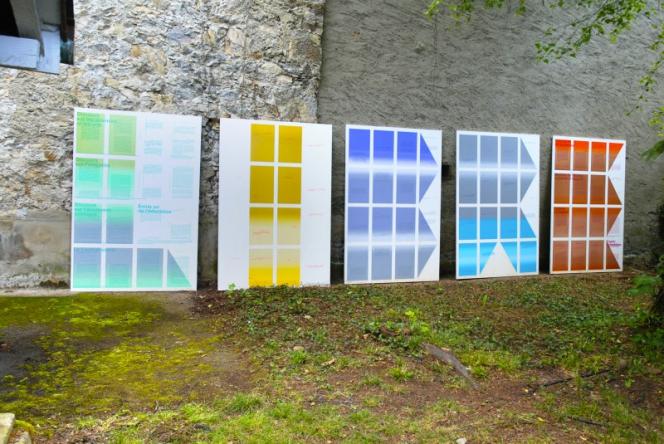 3/8- On the theme of money, these posters are printed in brilliant, reflective metallic ink. 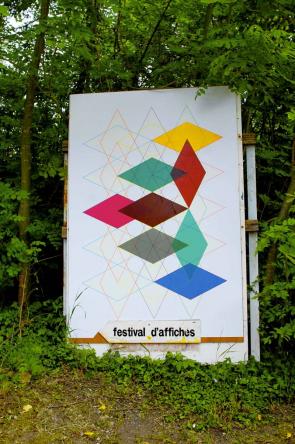 4/8- An outdoors installation with posters made of lozenge-shaped stickers in translucent colors. 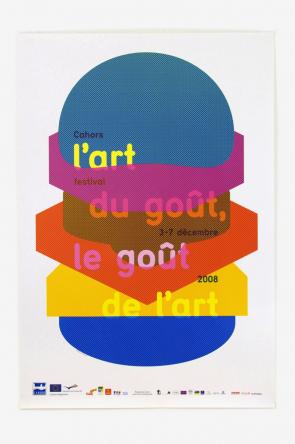 5/8- Poster for the festival "The art of taste, the taste of art" mixing creation and culinary art. 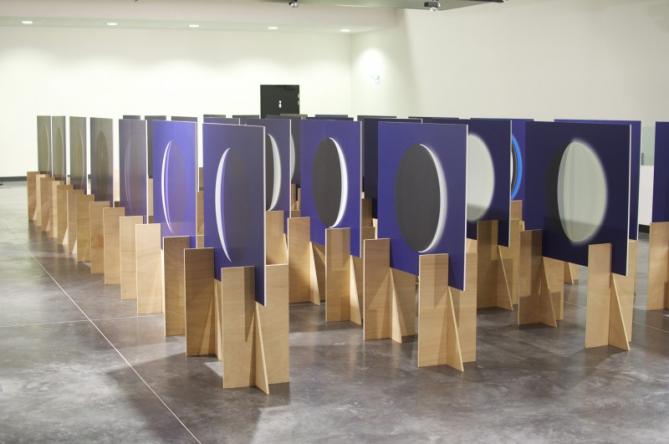 6/8- An exhibition on the evolution of the lunar cycle, using silkscreen overprinting. 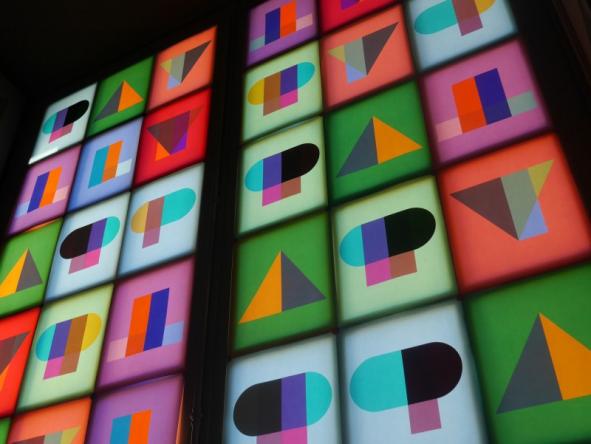 7/8- Stained glass window made for the exhibition "Play, design for the Martians". 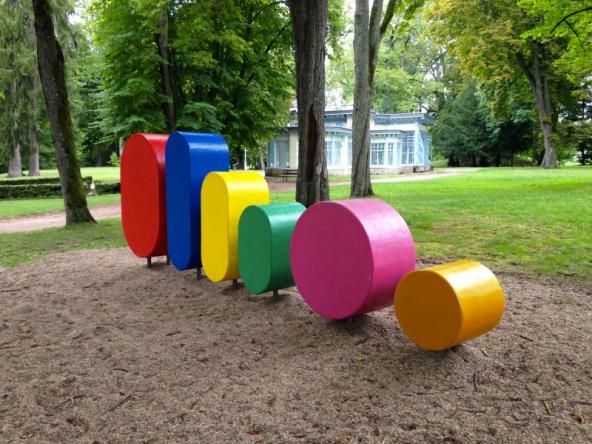 8/8- At Parc Saint Léger, modules are the building blocks of an evolutive graphic system.