Eva Zeisel maintains that what MoMA called Good Design was nothing more than lack of applied ornamentation.

Designers have been trained to depend on design competitions to define what's good and bad design. This behavior is particular to our profession. Other creative types, from decorators to writers, have their competitions—their games and tournaments — but being "good" is never the issue.

Brilliance, originality, proficiency, this is what matters. These artists don't have to stand on a high moral ground to get validation from their peers. Unlike us, they can be "bad" — and still get a standing ovation.

Designers developed this strange do-good dependency in the early Fifties, when the modern design movement was still in its infancy. For five years, between 1950 and 1955, they were subjected to a grueling evaluation exercise sponsored by the highest authority in the field—the Museum of Modern Art. In collaboration with the Chicago Merchandise Mart, the Museum developed one of the most ambitious competition agendas to date: the prestigious "Good Design" program.

Reading about this amazing postwar brainwashing campaign is an eye opener. Recently, at the New York Public Library, I came across an essay on the subject, written by Terence Riley, chief curator of Design and Architecture at MOMA since 1991, and Edward Eigen, an advanced student at MIT. Part of a series of studies on the role of the Museum at mid-century, the well-documented article, titled Between the Museum and the Marketplace: Selling Good Design, explains in great details how the design community was systematically and deliberately conditioned to equate Modernism with good design — and good design with good business.

Indeed, the "Good Design" story is steeped in Modernist romance. The idea was the brain child of Edgar Kaufmann Jr., the son of the Pittsburgh department store magnate who had commissioned Frank Lloyd Wright's Fallingwater masterpiece in Mill Run, Pennsylvania. In 1946, the young Kaufmann, then in his thirties, was appointed director of the Museum's Department of Industrial Design. A proponent of the arts (he had studied painting in Vienna, typography in Florence, and architecture at Wright's Taliesen Foundation), he turned out to be a marketing genius ahead of his time. Trained in his father's store, he orchestrated the Good Design exhibitions with the enthusiasm of a retailer and the optimism of a merchant.

The originality of his scheme was to turn a curatorial feat into an unprecedented and well-coordinated merchandising and media event. His goal was ambitious: stimulate the postwar economy by convincing the American people to buy new products—because they were better than old ones.

The program consisted of three exhibitions a year, each displaying anywhere between two to four hundred objects. The shows presented a comprehensive selection of what Kaufmann and his juries believed to be the best examples of modern products designed during that period. One of the originalities of the program was its taxonomy: instead of presenting gold, silver and bronze medals as well as prizes, a practice popularized by international exhibitions in the late 19th century, the jurors only awarded an unassailable "Good Design" stamp of approval.

This democratic system of classification allowed them to dodge the difficult issue of defining by what standards they were assessing each entry. It gave the word "good" an aura of wholesomeness, elevating it above the realm of human frailties. To this day, "good design" is a lofty concept that evades definition.

Back then, arbitrary and unqualified pronouncements by patrons and pundits went unchallenged. Case in point, the Great Ideas of Western Man campaign launched in 1950 by Chicago industrialist Walter P. Paepcke, the enlightened advocate of Modernism who founded the Container Corporation of America and the Aspen Design Conference. Still hailed as one of the greatest advertising coup of all times, the Container Corporation's institutional campaign celebrated the concept of justice and liberty as defined by the likes of Alexander Hamilton and Theodore Roosevelt.

In the perspective of today's political correctness, Paepcke's white-male-establishment's point of view would probably come under attack. So would Kaufmann's somewhat capricious definition of goodness. But these were innocent times.

The overt commercialism of the Good Design venture didn't seem to raise many eyebrows. Exhibition catalogues were explicit service guides, listing the objects on display, their price and where they could be purchased.

The installations, designed by celebrated architects and designers — Charles Eames and Paul Rudolph among them — were laid out like department stores, with housewares, accessories, wallcoverings, furniture, appliances and linens featured in separate areas. The artists' singular vision was de-emphasized, the objects alone were the stars. To further reinforce the authenticity of the program, the products selected by the Museum of Modern Art were awarded bold and distinctive "Good Design" tags, easily identifiable from a distance when displayed in a busy retail environment.

The first two shows of each year were held in Chicago at the Merchandise Mart during the winter and summer housewares market; the third, timed to coincide with the Christmas buying season, was held in New York at the Museum of Modern Art. A two-month long media blitz, this last extravaganza was supported by carefully-synchronized magazine and newspaper articles, symposia, advertising, consumer opinion polls, radio interviews and television appearances by Kaufmann. There was even a MOMA TV game show.

A "No Ax to Grind" ideology

Good Design's synergy between education and consumption was irresistible. At the time, you had to be a curmudgeon not to applaud its success. Architect Philip Johnson was one of Kaufmann's few antagonists. Elitist by nature, the architect of the Glass House was annoyed by the Good Design program's populist approach and by Kaufmann's evident endorsement of Frank Lloyd Wright's pragmatic philosophy. But there was more to his uneasiness than just rivalry.

Johnson believed that only a formal definition of modernism could "end the divorce between industry and culture," whereas Kaufmann preferred to keep things vague, professing no apparent ideology — "no ax to grind." For him, Good Design was an euphoric concept that equated esthetics with "eye appeal" and newness with innovation. His only bias was against decorative vocabulary borrowed from the past.

He made no distinction between machine-made or hand-crafted objects and only excluded from consideration things that were not readily available on the U.S. market.

As it turned out, Good Design's domesticated form of Modernism was fraught with subliminal messages, some of which we are still trying to decipher today. Back then, the word good was linked with the notion of ethics and morality. Milton Glaser remembers how, in the early Fifties, "good made reference to things that were supposed to be honest and truthful, like, for example, Abstract Art.

In contrast, today, good has no moral, spiritual, or redemptive agenda. Good simply means effective. Good means that which sells." For him, as for an increasing number of designers, the idea that problem-solving, in and of itself, is enough to generate good design is wearing thin.

In Design and Business: The War is Over, an article published in 1995 in the AIGA Journal, Glaser elaborates on why he believes the design community got shortchanged in the struggle between commerce and culture. "In the United States, the social impulses that characterized Bauhaus thought began to be transformed by our pragmatic objectives, such as the use of design as a marketing tool and the elevation of style and taste as the moral center of design," he writes. "It occurred so swiftly that none of us was quite prepared for it."

The elimination of storytelling

But another witness to the period, ceramist Eva Zeisel, who won countless Good Design awards for her elegant and witty crockery, challenges the very assumption that good design, as defined by the Museum of Modern Art, did, in fact, sells. "Good Design was never good business," says the spirited, ninety year-old artist. "It only appealed to a very narrow elite.

For the majority of Americans, it was O.K. to have modern appliances in the kitchen but in the rest of the house, particularly in the living room, traditional styles prevailed." She maintains that what Kaufmann called Good Design was nothing more than lack of applied ornamentation. Milton Glaser would agree. "Good Design stood for the elimination of story telling," he now says.

But Kaufmann was a staunch Modernist who conducted a one-man campaign against what he sincerely believed to be the "bad" taste of the public. In his own words, he wanted to see "a more extensive repertory of shapes, textures and above all, surface patterns not imitative of the past." He held a highly publicized panel discussion at the museum on the subject, "Is Ornament Good Design?" Zeisel remembers with a chuckle that she was one of the panelists.

She couldn't be bought. After viewing one of the Good Design shows, she wrote: "Nothing could be said to have been made for glory, or for the admiration of the people. There were no lapis lazuli glazes, no silver colored pottery, no sumptuous yellow tiles. Dishes were white, with severe, straight sides... The call to reduce sounded almost as if calling out to us sinners to repent, repent, repent... Why not call out rejoice, rejoice, rejoice?"

Post-Modernism was a gallant attempt to bring joy back into the design process. It did succeed up to a point, but it didn't release us from nagging assumptions about "good" and "bad" design; its over-the-top historicism didn't help us sort out the difference between what's modern and what's dated; its wasteful eclecticism didn't promote a new understanding of the role of ornamentation.

Most disturbing, Post-Modernism never challenged the notion that the measure of excellence of a design solution is its commercial success.

Let's put the Modernist agenda and its good-versus-bad dialectic behind—once and for all. Nature is suggesting we do. At the Museum of Modern Art, a number of objects from the 3,000-piece prestigious Design collection are beginning to disintegrate on their own. Plastic bowls are collapsing into toxic blobs; foam cushions are turning into sand; acrylic parts are becoming an untidy mess. All good things must come to an end. 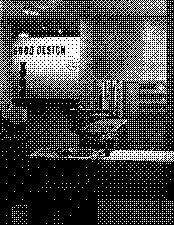 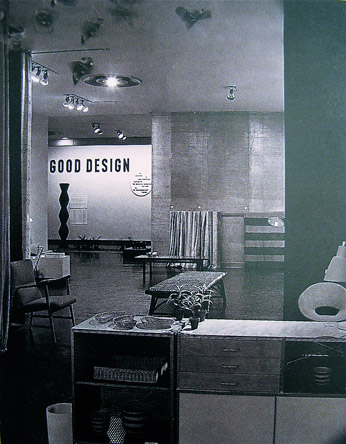