As someone only recently acquainted with the latest cultural intricacies of the old continent, I am still striving to evaluate the work of French graphic designers by my American standards. But it feels like trying to fit a square peg in a round hole. It cannot be done. In fact, I am beginning to wonder whether there is (or ever was) such a thing as French graphic design. I have come to the conclusion that “French” and “graphic design” are two mutually exclusive propositions.

Let’s face it, the French have never truly embraced graphic functionality. Historical circumstances having to do with the Catholic Church’s censorship of books during the Counter-Reform have flattered the French’s preference for pictorial expression. The reason French graphic designers are unable to gain international recognition is systemic.

To this day, before you can be admitted into most graphic design programs in the best French art schools, you have to learn to draw. If you cannot render a pretty good likeness of the Venus of Milo, you need not bother.

Don’t get me wrong: I am not a harsh critic of French design, far from it. I often feel like Miss Conviviality compared with my blasé and disgruntled French colleagues. Last May, at the occasion of the 20th edition of the Chaumont International Poster and Graphic Design Festival, a venue for a yearly ritual that brings together students and professionals from France, Holland, Germany, Italy and Spain for a weekend of show and tell, I only saw one person walking around with a big grin on her face, and that person was me!

The reason for the knitted brows, I found out later, was the perception that the main event, a grand retrospective of the last twenty years of French poster design, looked paltry compared with a concurrent show of more than one hundred contestants from all over the world. French graphic design, it turns out, is so unlike any other that it almost does not make sense when viewed in a competitive environment.

I would like to argue that what I saw there was evidence that French graphic design is not behind, but on the contrary ahead of its game. Its pictorial approach, far from looking quaint, is exhilarating. Its imagery, for the most part, steers clear of clichés. Its creativity is not dampened by commercialism.

But there is more: What became obvious to me at the Chaumont retrospective is that French designers seemed more interested in telling visual stories than conveying coded messages.

Across the board, they showed the greatest disregard for the sacrosanct Conceptual Image. To this popular, tried-and-true design solution, they seemed to prefer the flourishes of a narrative style.

To replace conceptual images, French graphistes are proposing compositions that subvert the now-universal (and safe) graphic language of codes and tropes. They take chances with unconventional imagery in an attempt to provoke an emotional release, a gut-level reaction, something not unlike a coup de cœur.

Selected for the Chaumont retrospective were numerous examples of what is sometimes called “French organicity.” For a 2004 poster for an independent film about Los Angeles, the celebrated M/M duo, Michael Amzalag and Matthias Augustyniak, created a brilliant typographical staccato of diffracting images set against a mundane LA streetscape. For a 2005 self-generated project, Christophe Jacquet, alias Toffe, compared digital bits to sardines — yes, sardines — building around the slimy imagery a complex visual discourse à la Baudrillard.

But what really got many Chaumont festival attendants upset was a strikingly beautiful poster by Mathias Schweizer. Looking at first glance like a self-generated project, the poster, representing a majestic waterfall as seen from the entrance of a cave, made a strong reference to Marcel Duchamp’s famous installation, La chute d’eau (The Waterfall).

However, unlike other similar experimental work by designers-as-authors, the image did not include any typographical element.

“If only there had been a logo for an electrical company on it, you could have called it ‘graphic design’,” remarked a flustered visitor, “but this is an exercise in self-indulgence. It doesn’t belong in this retrospective.”

People were shaking their head. What is the matter with French graphic designers? Don’t they know their place? Aren’t they supposed to communicate?

If indeed all it took was a logo in the corner of a painting to turn it into a legitimate graphic artifact, we could all be rich and famous. Schweizer, it turned out, is not rich, but he is famous for his iconoclastic yet effective design solutions.

His waterfall poster was not a caprice d’artiste. It was an assignment to promote a contemporary art show called Travail de Rivière (River Work), a collection of odd pieces on the theme of the excavation of memories. It did function as a regular poster does, its haunting evocation of raging water jumping over rocks arousing people’s curiosity and drawing them to the event. Like the river itself, one had to do a little digging around to find out what the image was all about.

Eventually, a week or so before the opening, the same posters, but with pertinent information overprinted, were seen around town. The campaign had done more than just announce the exhibition, it had conspired with it.

Far from being anti-functional, graphic designers in France are embracing a much larger functionality. Schweizer and his contemporaries see the role of graphic design as “branding” ideas (though they would never ever use this crass term to describe what they do!).

A likeminded fellow designer is Vincent Perrottet who works in collaboration with Anette Lenz to develop the graphic identity of a number of small theatrical companies located in provincial towns. Together, they’ve come up with a series of upbeat poster campaigns that reaffirm, season after season, the personality of the various theaters. But just as critical for them is the emotional connection these posters create with the public. Their visual appeal, their inventiveness, their complexity even are qualities that serve to establish an ongoing dialogue with the various communities whose members, for the most part, would rather go to a soccer game than attend an avant-garde theatrical production.

Whether abstract compositions, photomontages, or graphic puzzles, the posters perform in their environment as signs – as signs of intelligent life on earth. Their goal is not to sell seats but win minds.

French designers are known to argue with their clients to redefine objectives to include not only the more lofty values of the institutions they serve, but the best interest of the public as well. It’s an uphill battle as clients, even those in the cultural field, are under increasing pressure from the market economy to focus on short-term growth.

“But working in graphic design means taking a stand,” write Pierre Bernard in the introduction to the Chaumont catalogue. “Graphic design is the opposite of media communication,” he insists. Alex Jordan, who, with Bernard and Perrottet, is one of the leading instigators of the festival, concurs: ”A mark on a piece of paper is never benign nor innocuous.”

In theory, one can only applaud their attitude, but “how come, after 20 years of fighting to be heard, there is no evidence that we are making any sense other than to ourselves?” asks Perrottet.

They are making sense to me. But then again, my endorsement of their fine ideals might be a warning sign that I am about to go native. Next thing you know I’ll be writing paragraph-long sentences. 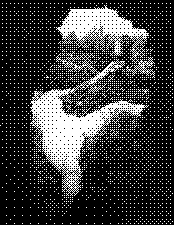 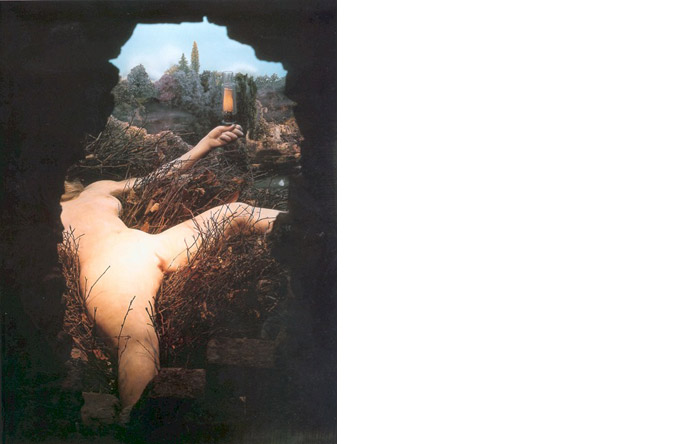 1/12 - "The Waterfall" by Marcel Duchamps, the inspiration for "Le travail de rivière" 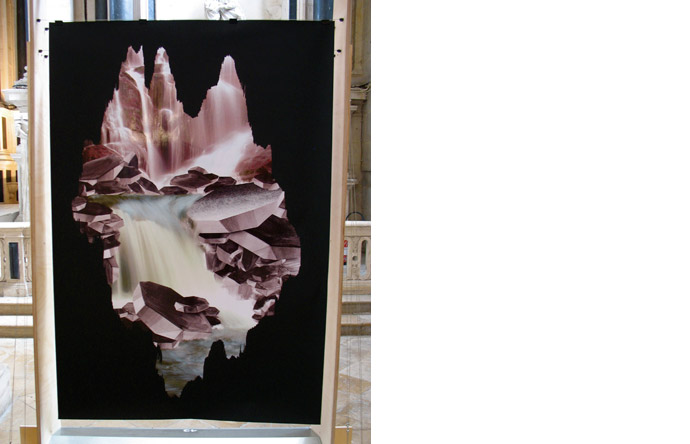 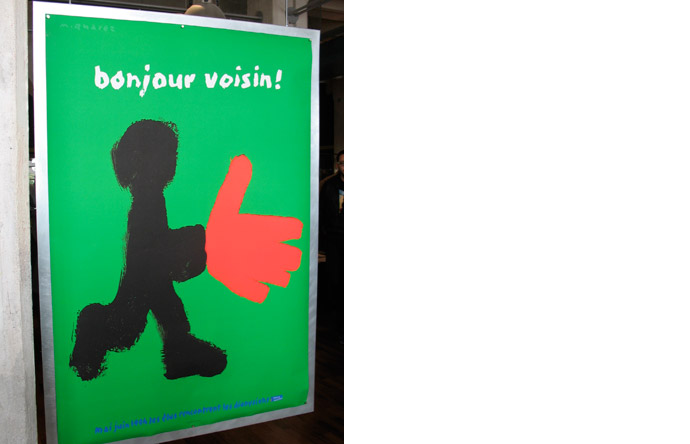 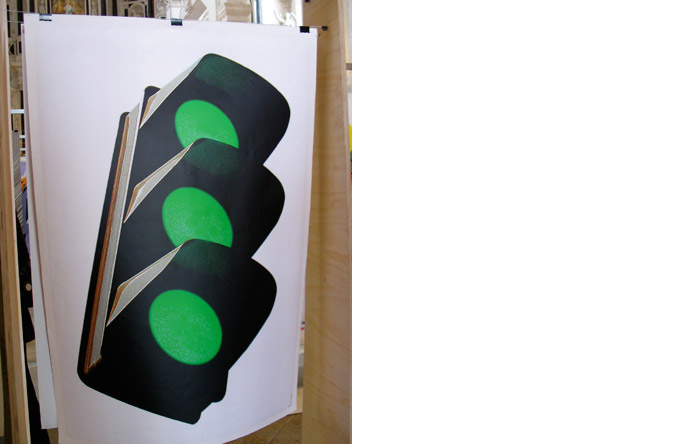 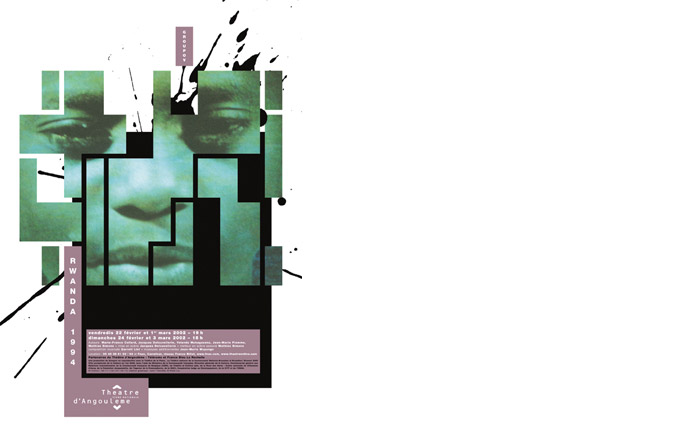 5/12 - Poster for the Theatre d'Angoulème by Anette Lenz and Vincent Perrottet, 2002 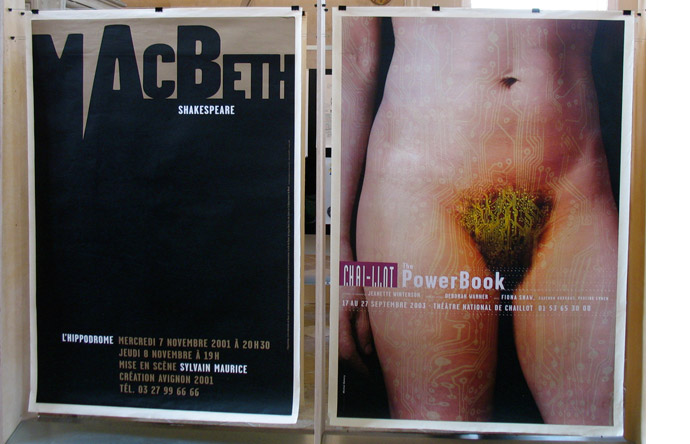 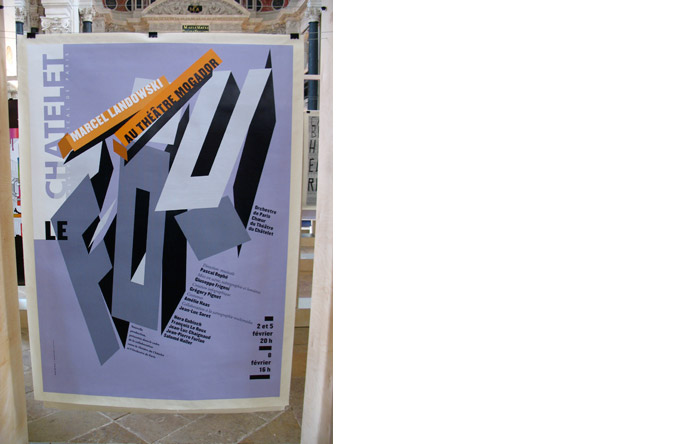 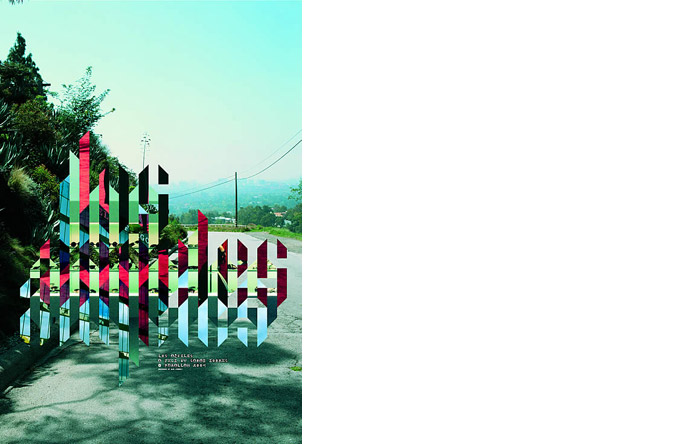 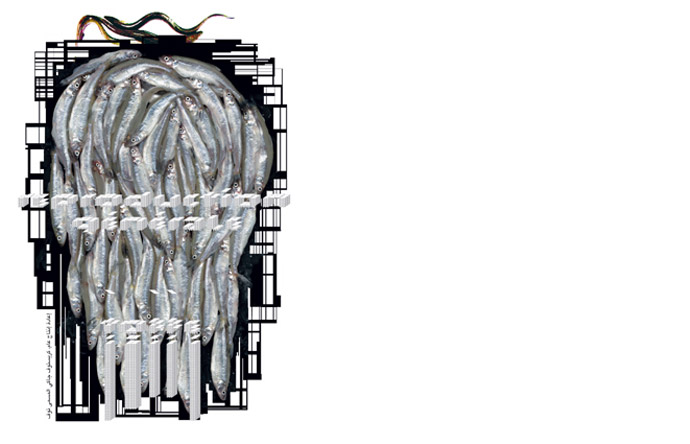 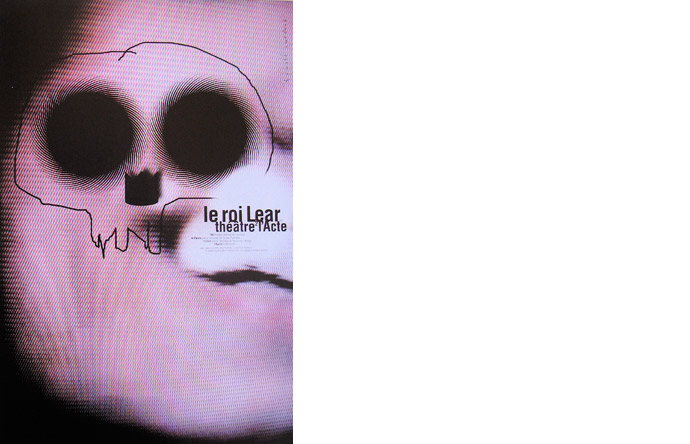 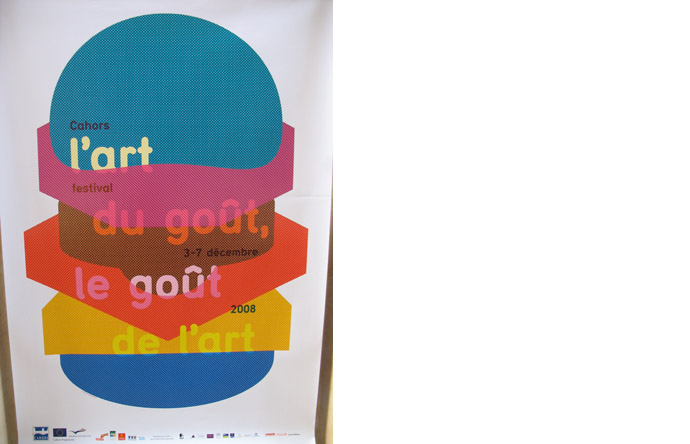 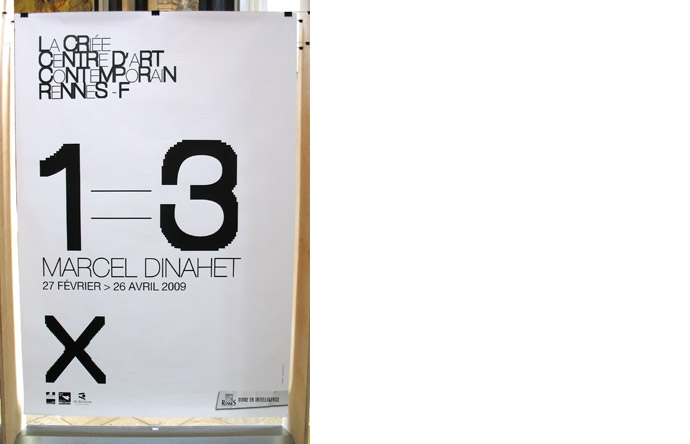