The Politics of Public Space in Paris

Scooters in Rome. Bicycles in Amsterdam. Yellow cabs in New York. Double-decker buses in London. Auto-rickshaws in Mumbai. In Paris, the favorite means of transportation is a pair of feet.

If Anne Hidalgo, the mayor of Paris has her way—and it seems that she will—the streets and sidewalks of the French capital will soon offer urban hiking opportunities that combine the sightseeing experiences of the New York High Line, the waterfront cafés of the San Antonio River Walk, the cultural significance of the Berlin Wall Trail, and the athletic challenges of the Thames Path in London.

In 2013, when she was running for mayor, Anne Hidalgo detailed her vision in Paris Qui Ose, (Daring Paris), a 200-page, comprehensive document in which she made a series of bold promises designed to turn the city into a sustainable metropolis. Top of her list was reducing the amount of fine particles in the air, a goal she could only achieve by restraining car traffic and hampering the free circulation of diesel-powered vehicles. What her ambitious program hadn’t anticipated is that, in her fight against automobiles, she would find allies in unexpected places. Not among environmentalists, but among the schlepping masses—pedestrians wearing out the soles of their shoes on sidewalks.

Today, the welfare of pedestrians is a priority for City Hall. Catering to the needs and wants of citizens on foot is helping put a positive spin on Hidalgo’s ferocious anti-car campaigns.  She is promoting a vision of Paris as a place where people can go back and forth without having to pay for transportation, where they can mingle safely, nose around leisurely, breathe freely, stay fit—and reduce their carbon footprint.

Prior to being elected mayor in 2014, Hidalgo served for 13 years as deputy mayor in charge of urban planning under her predecessor, Bertrand Delanoë. That’s more than a decade and a half, during which she has helped reshape Paris—about the same amount of time it took Baron Haussmann to tear down the medieval fabric of the old Paris and replace it with the modern city we know today.

Haussmann monumentalized Paris; Hidalgo wants to give it a human scale. He had traced wide boulevards; she is turning them into promenades. He created spectacle; she is crafting an environment.

Motorists are paying the price of this transformation. Commuters and truck drivers entering Paris to make deliveries are not fans of Hidalgo. But, like 3-ring binders, Jello salads, and the ticking of clocks, car ownership is fast becoming a thing of the past. Car sharing and location-based apps like Uber and Lyft are much easier (and far cheaper) alternatives. Public transportation is faster than cars, and running on clean energy. Recently, 1,000 open-access electric “scoots” have been deployed, offering yet another hop-on/hop-off option for pedestrians on the go. Meanwhile, the number of young people who don’t bother getting a driver’s license is growing—and they need ways to get around.

Because of its relative small size, Paris is a great candidate for a transportation overhaul. It can attempt to shift from a car culture to a pedestrian way of life, something larger and more sprawling European metropolises like London or Berlin would find daunting. At present, 60 percent of Parisians are already hoofing it, more than half of them women. Bipedalism is the preferred means of locomotion when running errands (79%), with people walking, on the average, more than 30 minutes a day.

These statistics only confirm what’s plainly visible. Sidewalks are expanding while roadways are shrinking. But that’s not all: the boundaries between the two seem deliberately blurred. Crossing the street safely is no longer just a matter of waiting for the lights to change. Before stepping forward, you must assess the situation on lanes that run parallel to roadways—speed zones for tramways, buses, taxis and bicycles.

In Paris, sharp peripheral vision is key to survival.

But juggling risks with pleasures has always been part of the urban experience. As more demands are put on both pedestrians and drivers, Hidalgo is trying to tip the balance in favor of people by re-landscaping neglected corners of the city— with median strips and central islands getting a lot of attention.

Trees, planters, flowerbeds, lawns, benches, seats, fountains and basins are some of the most visible amenities that are beckoning pedestrians. Yet, the most profound transformation to the urban landscape is only 6-inches deep. It’s particularly noticeable at major crosswalks, where the boundaries between sidewalks and roadways are fading away. The small granite rise that used to mark the area between safety and danger is gone. In its place are subtle variations in the color and texture of the pavement, features that are barely noticeable underfoot. Sometimes you can’t tell whether the wide expanse of cobblestones in front of you is a roadway extension or a new pedestrian plaza.

An alarming number of sidewalks have no curb.

The curb is a major signifier in the semiotics of way finding. Its removal signals a paradigm shift—a fundamental change in what it means to occupy the public sphere. The dichotomy between man and machine—their mutually exclusive relationship—is tested when pedestrians are left guessing whether the road belongs to them or to people behind the wheel. In Paris, navigating the streets requires as intuitive a sense of direction as finding your way around the web or figuring how to transfer funds from your smartphone.

Today, with cars and motorcycles no longer the dominant species, pedestrians should feel safer, but, realistically, they don’t. Footpaths have become almost as dangerous as roadways. More worrisome is the traffic on dedicated bicycle lanes. Theoretically people on foot have the right of way, but they are no match for bikers using one third less energy but going three times as fast.

But in Paris, the pavement is not merely something you pound on. It is the ultimate democratic realm. Cobblestones are symbolic artefacts, the building blocks of the myth of the barricades and its romanticized representation by Eugène Delacroix. To defend their rights as citizens, Parisians of all social and economic status take to the streets. For them, diversity—in people as in modes of transportation—is a sign that the French Republic is safe and sound.

Sous les pavés la plage. The famous Situationist International slogan, “Under the cobblestones, the beach,” comes to mind. The Paris of Anne Hidalgo is a beach—a rich intertidal ecosystem, where pedestrians, in search of light, nutrients and oxygen, move between the low and high tides.

One creature, formerly on the endangered species list, is making a recovery on Paris’ wild asphalt shores: the 19th century literary figure known as Le Flâneur. He belongs to a variety of pedestrian indigenous to Paris (Pedester Lutetia?). “The crowd is his element, as the air is that of birds, and water of fishes,” wrote Baudelaire. Like the common wall lizard that lounges on rocks and stones (Podarcis Muralis), Le Flâneur is an urban gawker, a free spirit, a discreet bystander who loves to observe without being seen.

Anne Hidalgo’s Paris is his habitat. You’ll find him strolling on the banks of the river Seine, where expressways have been replaced by parks, playgrounds, and promenades. You’ll find him wandering Boulevard Raspail and Avenue René Coty, where sidewalks look like shaded bridle paths. You’ll find him sauntering rue Bignon, or in front of the church Saint Nicolas des Champs, or Place Alphonse Allais, or rue Boulay—formally nondescript locations that are now surprisingly charming, just short of picturesque.

But all is not well between Anne Hidalgo and Le Flâneur. She contends that urban sexual codes that favor men were put into place at about the time he appeared in French literature. There is no female counterpart to this legendary character in 19th century novels and essays. Women who were seen lingering in the streets of Paris, as he did, were suspected of being prostitutes.

So, recently, Mayor Hidalgo has spearheaded a new offensive called “Gender & Public Space”, with the intention of making the streets of Paris more women-friendly. She sponsored a set of specific directives designed to quote-unquote “reverse the binary normative sexual codes and policies of public space that were established to serve an out-dated masculine bourgeois archetype”.  Translate:  eradicate sexual harassment in the streets.

In Paris, where only two percent of street names honor women, public spaces are not gender neutral. What would it take to correct the situation? City Hall is exploring ways to turn bus shelters into secured rest areas, design street lights to minimize threatening shadows, transform some back streets into playgrounds, and create a more detailed signage system—women who are lost being prime targets of urban predators.

The first woman to be elected mayor of Paris, Ann Hidalgo, a socialist, is a polarizing figure on the political scene. Not because she is a woman— but because she is an ambitious woman—a derogatory term loaded with sexist connotation. She has many critics, particularly among conservative politicians who are quick to point out that her progressive agendas and over-zealous environmental policies are misfiring.

They may have a point.

Hidalgo’s most recent and publicized initiative was the creation of Rives De Seine, a riverside park extension on what used to be a popular West-East expressway connecting the Place de la Concorde with the Bastille area. This portion of the quays is now a two-mile long promenade, a pedestrian walkabout alongside spectacular historic buildings (The cathedral of Notre-Dame, among others). Instead of reducing the pollution, though, banishing cars from this stretch of highway has inadvertently increased it on alternate routes, on the right and left banks, where more cars are now piling up, creating more traffic jams — more diesel exhaust, more noise, more frustrations.

Hidalgo is taking it all in a stride (pun intended). Already ten percent of drivers who used to cross Paris on the riverbank expressway have decided to leave their car in the garage. More will follow. By 2020, she will have imposed a “zero diesel” rule, an 18-mile per hour speed limit on streets, and a city-wide connected parking app. It’s a challenge, but the lady might have the political will and the ambition to—literally—ride it out. 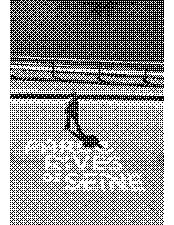 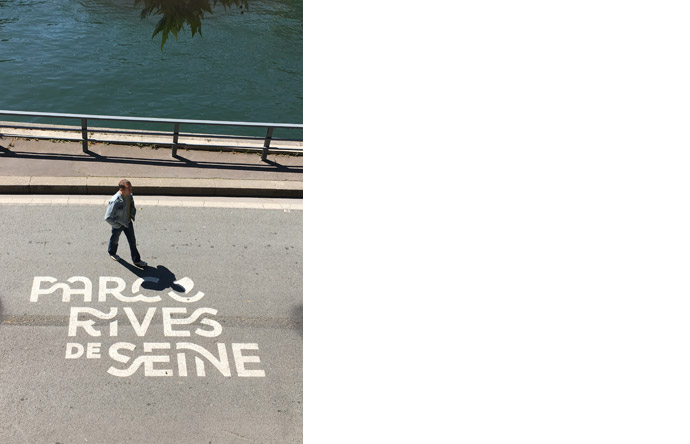 1/5 -- A popular east-west expressay is now a pedestrian park. 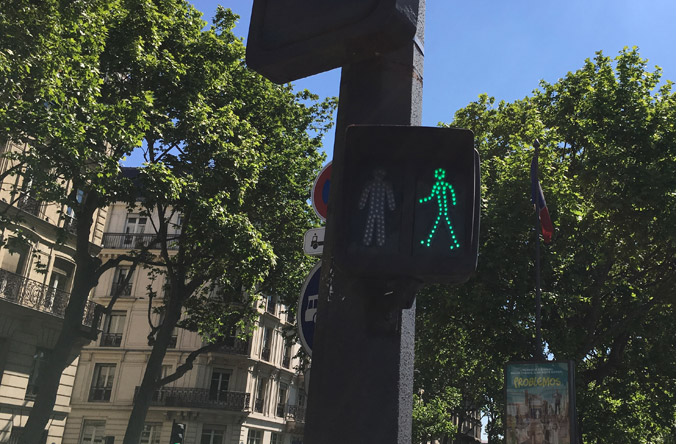 2/5 -- Parisians are encouraged to stay fit and reduce their carbon footprint. 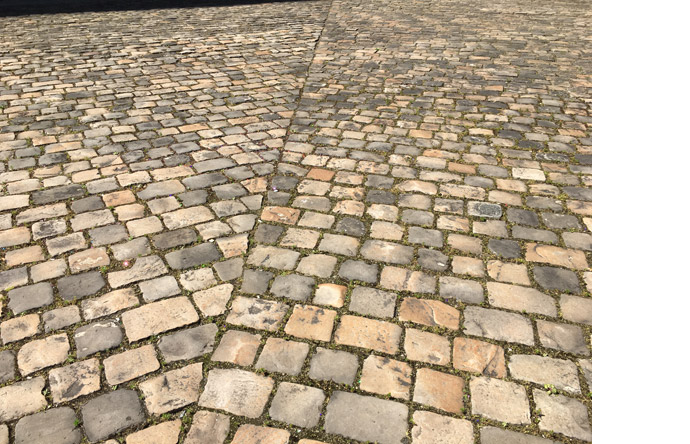 3/5 -- Cobblestones are symbolic artefacts, building blocks of the myth of the barricades. 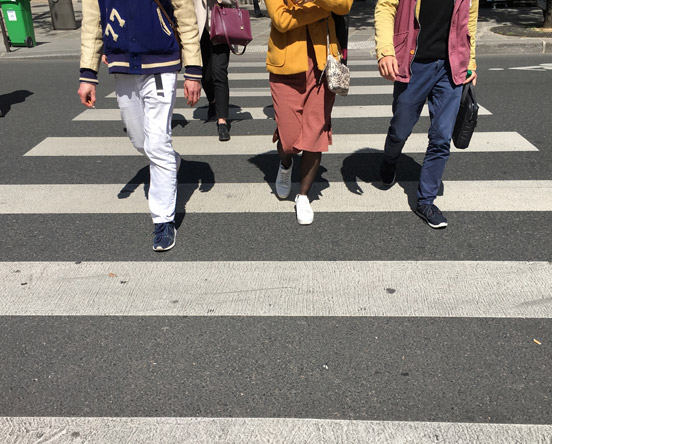 4/5 -- Today the welfare of pedestrians is a priority for City Hall. 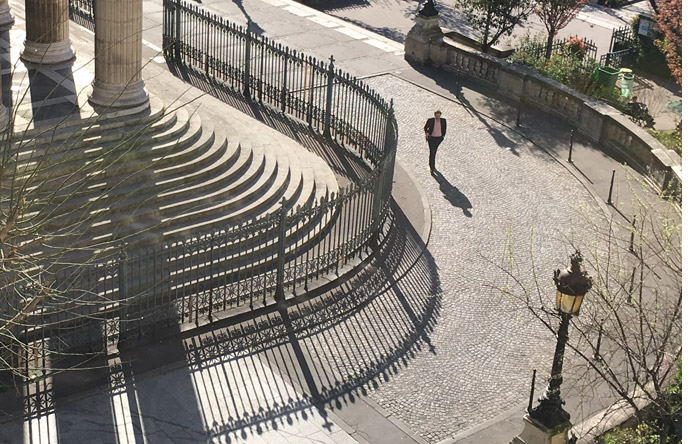 6/6 -- The Flâneur is a 19th century literary figure —a legendary urban gawker.