One must wear a Lacroix interior the same way one would don one of his couture creations: with attitude.

The grand finale of the Christian Lacroix fashion show celebrating the 20th anniversary of the designer’s couture house was a wedding gown cut out of a precious patchwork of brocades and damask, its exuberant floral motifs forming a sparkling tapestry flecked with gold.

The veil was held in place by an oversized crown — a replica of the gilded crown worn by the Portuguese Madonna of Fatima. Two days later, July 5th, 2007, the extravagant gown made the front page of Le Monde, the conservative French daily.

But while models had been strutting down the runway, another Lacroix production was being staged nearby, this one attracting no media attention — at least not yet. In a narrow street behind the Orsay museum, dozens of carpenters, painters, electricians, and floor finishers were frantically putting the last touches on the Bellechasse, a 34-room, 4-star hotel scheduled to open two weeks hence.

The fanciful hotel is the latest example of Lacroix’s hospitality work, a growing sideline that includes the celebrated 2005 Petit Moulin in Paris’s Marais district and the new decor of the cabins of the TGV high-speed trains—a posh environment that looks and feels like the lounge of a boutique hotel, not like your typical railroad coach interior. In all these projects, Lacroix indulges his baroque taste by constructing narrative fantasies from layer upon layer of visual references having to do with travel.

“I am not a traditional couturier: I don’t cut dresses,” says the designer, who, at age 56, calls himself an art director more than a dressmaker. “What I do is create outfits that convey moods, memories, desires. Likewise, the hotels I design—they too are conduits for dreams.”

As far as he is concerned, the only difference between the feel of a garment and that of a room is scale. And sure enough, the décor he put together for the Bellechasse is as over-the-top as his famous “pouf” dresses and bejeweled bustiers. In a mere 13,000 square feet, there are no less than 80 types of fabrics, 20 tile motifs, 10 carpet patterns, seven totally different color schemes, and close to 50 original giant Lacroix collages used as ceiling or wall coverings. Sometimes there are as many as 10 deliberately mismatched textures, patterns, and historical motifs crammed together in a single room.

“Lacroix’s early detractors accused him of dabbling too much outside fashion,” says Olivier Saillard, curator of the upcoming 20th anniversary retrospective at the Musée de la Mode in Paris. He compares Lacroix to Fornasetti, the Italian artist whose personal vocabulary of forms went beyond his particular craft.

Indeed, hospitality design is not the prolific virtuoso’s only digression. His other well-publicized projects include a tramway for the city of Montpellier, home products for a mail order catalogue, uniforms for Air France and SNCF railroad employees, costumes and scenery for major theatrical productions, plus countless exhibitions and books.

For Saillard, it makes sense for a fashion designer to venture into fields traditionally reserved for architects, furniture designers, or graphic artists. “Today contemporary design investigates ephemeral values,” he says. “It is less classical, less timeless than it used to be. Good designers are no longer strangers to fashion trends.”

This much is certain: one must “wear” a Lacroix interior the same way one would don one of his couture creations—with attitude. You cannot imagine, for example, a tourist venturing inside the Bellechasse sporting a velour track suit or a mumu dress. The place compels you to dress the part.

As soon as you enter the small lobby, you are on a stage, as the theatrical décor suggests. Pompeian-inspired murals feature actors wearing antique masks. Red velvet lounge chairs and black lacquer side tables would not be out of place at the opera. Tucked away—in the wings—are stairs, elevators bank, and reception desk. In the back of the lobby, behind glass doors, a split-level sunken courtyard, with a walled-in mezzanine terrace, acts as a secondary stage.  It is the kind of place that demands you make an entrance.

Lacroix used the same histrionics for the rest of the building. The property consists of two contiguous houses that were gutted to maximize the available square footage. Working in concert with architectural firm Jean-Luc Bras/Emmanuelle Thisy and with interior designer Anne Brugière Peyroux, he devised a labyrinthine floor plan of curvy hallways snaking around odd-shaped rooms, each with a unique décor.

Appointed with large upholstered furniture cobbled together as if by chance, the guestrooms have the makeshift feel of theatrical dressing rooms. In some instances, the bathtub is a few feet from the bed, in others a shower is tucked behind a screen or hidden in an alcove. The interior volumes are simple — no moldings, cornices, nooks, or crannies — but the flat surfaces form intricate puzzles, with oversized decorative motifs printed on large canvas pasted on walls or ceilings.

A gypsy at heart

“Lacroix creates a complex universe,” Brugière Peyroux says. “When you step inside a room, there is a lot of visual information to take in. The floor plan is efficient, the bathroom fixtures contemporary, the window treatments minimal, but the décor is rich, demanding, exciting.”

The disparity between clean volumes and busy surfaces is what gives the Bellechasse its character. It is unlike Lacroix’s other hotel, the Petit Moulin, whose lavish interiors took full advantage of the building’s architectural heritage, its old stairway, rustic beams, ancient flooring, and quaint storefront façade. In contrast, the Bellechase has a contemporary edge more attuned to the tastes of the left-bank intellectuals who live nearby.

An art historian at heart (he studied to be a museum curator), Lacroix is an astute observers of styles. “I drew my inspiration from the history and the atmosphere of the neighborhood,” he insists. A sophisticated hodgepodge, the Bellechasse’s motifs include Tarot cards, wrestling masks, Islamic ceramics, Victorian decoupages, antique astronomy charts, action painting, and Renaissance architecture. “Lacroix is image-bulimic,” Saillard says. “He tears pictures from magazines all the time and stacks them in piles all over his studio. You should see his scrapbooks! They explain his work.”

“What interests me most,” Lacroix says, “is to explore images in the mind of people using what I design. The theme I chose for the Bellechasse is ‘travel within travel’ because I want the place to be an exotic destination for people who’ve seen it all.” Tourists, he believes, are nomads drifting from discovery to discovery. For them, he designs hotels that feel like operatic gypsy camps with rooms as exotic as the inside of caravans. “I was born in Arles—home to the Gispsy Kings, and to gypsy culture,” Lacroix says. “It is also home to other itinerants, like circus people and traveling actors, in the tradition of troubadours and minstrels. I have no gypsy blood, but I did grow up around these folks. I was nourished by this atmosphere of travel, drama, and gypsy glamour.”

More reminiscent of boutique hotels than public transportation, Lacroix’s design for the inside of the TGV high-speed trains is in character with that vagabond spirit. “For me, traveling is going through the looking glass, whether it’s a painting, a photograph, a text,” Lacroix explains. “When in a train or in a hotel room, I travel inside my head.”

The sleek interiors he created for the rail cars evoke a more 20th century tale of travel, the aerodynamic craze of the glamorous 1940s, when kettles, adding machines and tape dispensers looked like streamlined locomotives. But, thanks to a high-octane color scheme that includes neon red, bright purple, and acid green, there is nothing nostalgic about the curvaceous shape of the seats or the fluid profile of the fixtures.

An egg on top of a vertebra

Vincent Créance, CEO of MBD Design, the industrial design firm that hired Lacroix in 2002 to help the company win the TGV competition and carry the project to completion, explains that Lacroix’s creative process, though based on imagery rooted in whimsy, was in fact technologically sound. “Lacroix started with words, poetic travel words,” he says. “We quickly realized that it was the literary quality of his brief that was a source of inspiration. Then — and that was the defining moment — he introduced his idea for the chairs by showing us the image of an egg on top of a vertebra.”

Lacroix knew that he was taking a chance by introducing his concept with such an unusual visual metaphor.  “I was surprised that the engineers at MBD did not send me home when I showed up at their office with my vertebra and my egg,” he notes.

But the industrial designers kept their phlegm. “First it looked like an obscure reference,” Créance concedes, “but when you study it closely, you realize that everything is in it, conceptually. The armchairs of the TGV are egg-shaped cocoons propped on spine-like columns where all the ‘nerves’ are housed: the wires, the individual light fixtures, the seat numbers, the cup holder, the trash bin, the electrical outlet, and the tilting mechanism.”

Along with the seating system, Lacroix  also contributed novel ideas for making the train more hotel-like, such as more restful diner cars, family nooks, mini office spaces, and chat bars. He also designed the graphics on the body of the trains. “I like to think of people looking at the high-speed train as it zooms across the landscape in a colorful blur. I design trains the same way I design couture garments—for the spectacle it creates.”

But not everyone appreciates this penchant for the spectacular, which often sacrifices practicality. Whereas a couture gown is only trotted out on special occasions, the interiors of the hotels and the trains, which are subject to day-to-day wear, will likely prove difficult and costly to maintain.

So, while no one seems to complain about the often convoluted creative process favored by Lacroix, his partners are secretly concerned about serviceability. “In a million years, we would never have suggested purple chairs for the TGV,” says Créance. “For one thing, it’s too fragile a color. But Lacroix says ‘purple’ and no one challenges him. He is the genius: that’s why we hired him.”

Brugière Peyroux, who was the go-between Lacroix and the Bellechasse hotel owners, agrees. “It was well-understood from the beginning that there would be a price to pay for the originality of the Mr. Lacroix’s scheme, and I am not talking about the cost of building. Caring for all the different materials once the hotel is open will require dedication.”

For Saillard there is no conflict between Lacroix’s sincerity as an artist and his marketability. “After twenty years, we can see a coherent picture emerging from all his projects. Lacroix evokes an imaginary world, whether it is an hotel, a train, a tramway, or a dress.” Lacroix concurs: “As a child, I used to put on a show in my head to change the world to my liking. Today I see my work as creating opportunities to escape from ordinary life.” 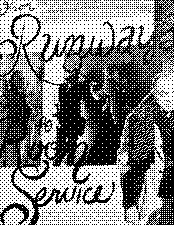 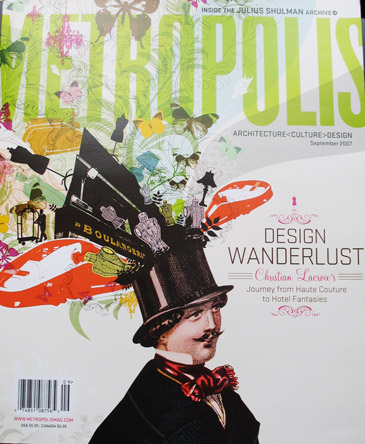 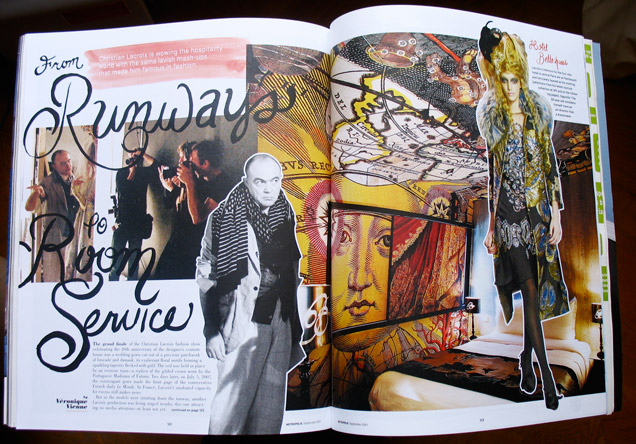 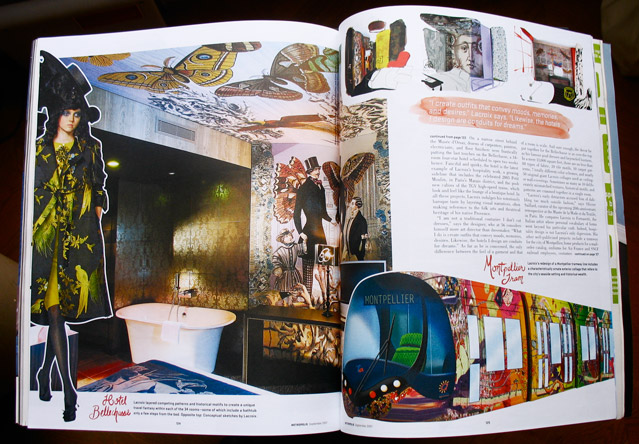 Lacroix creations are playful expressions of his dream world 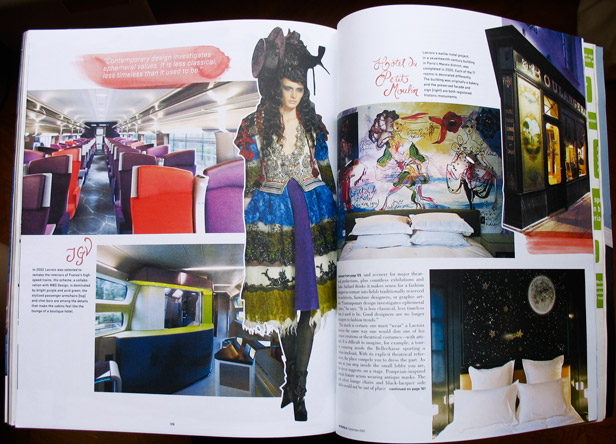