The newspaper Jean Seberg was selling on the Champs Elysées used to deliver a form of journalistic escapism.

One of the hardest thing about moving to Paris is doing without The New York Times every morning. As well-designed as the online version is, it doesn’t compare with the printed edition. In fact, I find the difference between the two experiences surprisingly disturbing.

The digital paper, updated regularly throughout the day, keeps scores on the latest developments, transforming reading the news into a spectator’s sport. The fiber-based original, in contrast, lets you contend with the information mano-a-mano, hand-to-hand, one rustling page at a time.

But things are perking up. Since March 30th 2009, a pretty good facsimile of the Op-Ed page is now available at my local City of Light newsstand. As luck would have it, the editors of my favorite newspaper have taken over the International Herald Tribune, the famous American newspaper edited in Paris since 1887, and are turning it into a global NYTimes.

For a steep 2.50 euros, the equivalent of 3.50 dollars, I can now buy a likeness of the Gray Lady from a sidewalk vendor on the Avenue de Opéra, right across the street from one of the 35 Starbucks now established in the French capital. You can’t stop progress. All I now need is for the Apple Store to open in the upscale shopping mall that’s under The Louvre museum, and I can pretend that I live in Manhattan.

I would like to believe that the two papers are the same, but truth be told, I am disappointed. The new format of Tribune feels too loose. For reasons having to do with the norms of European and Asian presses on which the IHT is printed, the paper is taller and wider than the NYT, its larger size an impediment when it comes to creating synergy between the various graphic components on the page.

Imagine Times Square recreated on a big lot in Las Vegas, and you’ve got how it feels to open the new International Herald Tribune.

A perception of "seriousness"

This situation is doubly frustrating for the expat I am. I did not dislike the old Tribune, in spite of its dowdy format (heavy Poynter headlines and text, tight leading, blocky layouts). Though not smartly designed, it had a cult status here, in part because of the movie Breathless (A bout de souffle) in which boyish-looking Jean Seberg was seen strutting down the Champs Elysées sporting an advertising tee-shirt embroidered with the logo of the Herald Tribune.

Today, newspapers could not buy this type of product placement if they tried. So haunting was this 1960 filmic moment, courtesy of Jean-Luc Godard, that it had become an integral part of the image of the newspaper.

For countless English-speaking readers worldwide, 250,000 of them, myself included, the name of the publication conjured up the memory of days gone by when American culture was synonymous with savvy, sophistication, and style.

Not surprisingly, when some top NYT editors suggested the old Tribune be terminated as such and be replaced by a spiffy international edition of the Times (the Manhattan paper assumed full ownership of the Paris daily in 2007), marketing studies revealed that the brand equity of the Tribune was too valuable to be discarded.

Prominently displayed on newsstands in 180 countries, this 120-year-old media institution is a highly respected product. So, somewhat reluctantly, decision makers at the New York Times Company had elected to transform the IHT without changing its title, stipulating nonetheless that the new version had to reflect as much as possible the journalistic principles and the “seriousness” of the Times editorial direction.

In charge of masterminding this design operation was Tom Bodkin, associate editor and design director of the Times since 1987.

With the help of art director Kelly Doe, he systematically itemized the visual components that contribute to creating a  “perception of seriousness”.

In order to explain to the Paris staff how to replicate the NYT format successfully, they had to draw a long list of directives.

To begin with, no extrabold headlines!

The typographical approach must be neutral, the text easy to read, with titles and subtitles that steer clear of sensationalism. The size of the letters should not be used to emphasize the importance of the news.

Bodkin and Doe made one last stipulation: under no circumstance should text or headlines be printed in color! This deliberate blandness, considered a quality at the NYT where impartiality is paramount, looked a little meek when transplanted abroad, in a different cultural context.  Compared with the majority of European newspapers, the pages of the IHT feel today rather pale.

Betting on “seriousness” was a calculated risk The New York Times was willing to take in response to the challenge of free dailies and online newspapers. Editors were confident that IHT readers would respond positively and embrace the more structured format as more informative, and thus more entertaining.

They did not think that their international audiences would be intimidated by the succinctly presented wealth of information, nor would they be put off by the “anglo-saxon” exactness of the more demanding Bodkin template.

What the NYT editors did not measure, though, is the void the old Tribune would leave. Ah! to lean on the counter of a bistro, order a cup of Java, and, sidestepping the gossipy local press, open the fusty Herald Tribune to survey the latest dispatches from news services worldwide.

Its uncool design was endearing. Cosmopolite yet at the same time foreign, conservative but oddly opinionated (sometimes disconcerting so for European readers), the paper Jean Seberg was selling on the Champs Elysées used to deliver a form of journalistic escapism.

Escapism is still what I seek when digging 2.50 euros from my bag to purchase a little piece of home. I fold the newspaper under my arm (making sure that its name is showing) and stroll leisurely down the avenue to a nearby café. I then sit down and unfurl my prize possession.

Sure, the Tribune doesn’t give me the same sense of compactness and compression I came to associate with good reportages. But the intelligence of its visual vocabulary is utterly compelling, once I dig into it. As with The New York Times, I find myself eager to engage with it, eager to decipher its codes, eager to question its choices of images, eager to interact with its design directions. 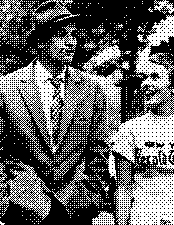 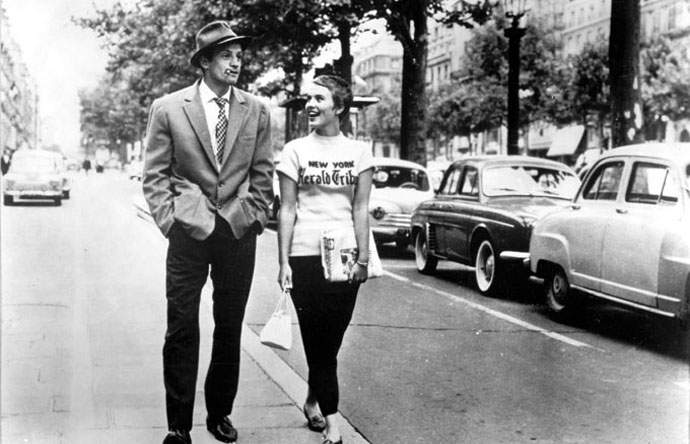