Adrift in a Sea of Information

The more spectacular the presentation, the more isolated the spectator becomes.

Paradoxically, even though graphic arts is one of my unmitigated passions, I am not a very good observer of the visual world. I give images a once-over, and, unless they grab me, I move on. In fact, even if they grab me I move on.

I only skim the surface of art magazines, design exhibitions, photo portfolios, and museums shows. My short attention span, though, is a critical asset. When you are in the communication business, an ability to quickly “get the picture” is a plus.

When recently I had a chance to go to the Louvre, I did the same thing. I began to jog through one of the world’s greatest art collections.

One painting stopped me though. Not the painting actually, but the crowd gathered in front of it. Dozens of tourists, their digital camera raised in the air, stood motionless in front of The Raft of The Medusa, apparently mesmerized by the sight of the condensed image of the huge canvas held captive on their small screen.

In a spirit of dissent, I decided to stop, sit down, and actually look at the painting with my very own eyes.

Boy, was I in trouble! I didn’t know where to begin my observation of this large composition by famed nineteenth century painter Théodore Géricault. The realistic painting shows a desperate party of shipwrecked men clinging to each other and to their makeshift raft. A representation of an actual event that took place a couple of years earlier, the scene is both horrifying and fascinating.

The center of the painting is occupied by a heroic tangle of male bodies — half of them corpses — in various state of undress. You want to avert your eyes to avoid being the involuntary voyeur of some gruesome homo-erotic fantasy.

I was bobbing on the surface of the image, as adrift as the raft itself, unable to focus my attention anywhere, when I noticed on the upper corner of the painting a minuscule point on the horizon, just a smudge really, but unmistakably the silhouette of a distant ship. Two of the raft’s survivors are shown atop a pile of broken barrels, waving torn pieces of garment in the direction of the barely visible vessel, hoping to attract the attention of its crew.

Will the rescuers see the raft lost among the swells? That’s the question the painting raises—and, in a way, the question I was wrestling with: will I see in the painting what I am supposed to see? And how do we see anyway? What do we notice in our fluctuating field of vision?

How do we go about gathering relevant visual data in a surging sea of information?

The manufacturing of attention

Columbia University art historian Jonathan Crary, author of the cult book The Technique of The Observer, considers The Raft of The Medusa emblematic of a moment in our culture when the way we look at images underwent a major transformation — one “in which information was transformed into commodities.”

Though classical by its style, the painting is modern because it is supposed to be newsy, timely, true-to-life — and an object for popular consumption.

Unlike earlier paintings with religious or allegorical subjects that invited viewers to ponder, meditate and daydream, The Raft of The Medusa, because of its journalistic theme, was painted to solicit your attention, requiring you stop, focus, shut off the peripheral world, and actively process the visual information.

Paying attention in this way, according to Crary, is a learned behavior, the result of an economic imperative whose origins can be traced back to the industrial revolution, a period during which a vast number of workers had to be trained to pay attention to the machines they were operating.

Attention Deficit Disorder, then, is not a physiological disorder, as the medical profession would have us believe, but a reaction against the increasing pressure of a system that requires we put our natural ability to perceive at the service of productivity.

Crary’s historical perspective on the manufacturing of attention helps explain the reason for my short attention span, and for that of many of us in the business. Our absentmindedness is a defensive technique, a direct reaction against a practice that attempts to discipline the natural rhythm of human perception, characterized by ebbs and flows.

But there is more, according to Crary. One of the side effects of this “suspension of perception,” as he calls the state in which we pay attention, is the amount of time we spend immobilized and isolated.

Peeping Toms instead of participants, we stand alone as we struggle to rein in our volatile power of concentration; we are cut from the world, often in the dark, focusing on a single set of images or sounds.

And I am not just talking about being stuck in front of a television set or a computer monitor, or hooked to an ipod, a cell phone, or a blackberry. The way most tourists behaved at the Louvre was evidence that even in a situation that encourages people to drift from room to room and from painting to painting, the pressure to pay attention insulates us from the very world we have come to see.

Some unfortunate visitors were starring at paintings with a blank expression on their face while listening to audio-devices; others, as docile as schoolchildren, were scrutinizing the works of art to see what their guidebooks or their guides told them to see; and still others, riveted to one spot, were snapping digital pictures of whatever was in front of them.

Each individual was alone in a private world, too busy consuming information to look around and partake in the often cathartic experience of shared art appreciation.

Solving the so-called ADD crisis may not require more innovative or more focused visual communication strategies. The more spectacular the display, the more isolated the spectator.

If, on the other hand, we minimize attention-grabbing gimmicks, we allow viewers to relax and look around as they please. I am not advocating here minimal layouts and less–is-more imagery. On the contrary. We need more richly detailed pictures. And maybe ornate frames too. Crary points out that one of the things that triggers attentiveness is sensory impoverishment in the peripheral vision.

The quality that makes The Raft of The Medusa one of the most famous paintings of the Louvre today is no longer its journalistic appeal but the fact that the composition is loaded with so much pictorial information—ropes, body parts, pieces of canvas, waterlogged garments, scraps of wood, shadowy figures, and more body parts—you are likely to miss the point of it all, that tiny, barely visible speck on the horizon.

What the ADD sufferer is looking for is not instantaneous gratification, but its opposite. As the Situationist/Lettrist saying goes: “Don’t consume; live a little.” 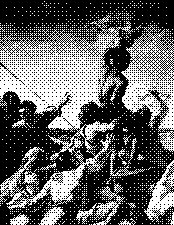 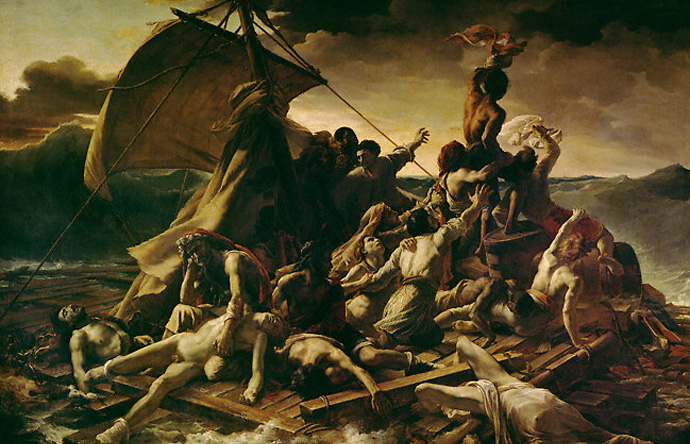 1/1 - "The Raft of the Medusa" by Théodore Géricault depicts a real-life naval tragedy, 1818