A Polarized Piece of Public Plumbing

Marcel Duchamp & the Nature of Gender

One hundred years ago in New York, an artist walked into a store selling bathroom fixtures and bought a porcelain urinal. Back in his studio, he flipped the thing upside down, propped it on a pedestal, and signed it as if it were a legitimate work of art. He picked an odd pseudonym, “R. Mutt”—leaving everyone to speculate about the reason for this peculiar choice.

His real name was Marcel Duchamp. He was already a famous Dada artist. Today, he is credited with changing the course of art history with iconoclastic “readymade” conceptual sculptures.

Duchamp himself peddled and embellished his legend, presenting different and sometimes contradictory versions of the same events. Was the inversion of the urinal an inspired anti-art prank in the Dada tradition, or was it a premeditated stunt, carefully engineered to disrupt artistic conventions? Duchamp, an accomplished chess player, never revealed the strategy behind any of his enigmatic moves.

However, one thing is sure: Duchamp used his urinal to scent-mark his territory. And what a territory: Cubism, Futurism, Dadaism, Surrealism, Conceptual Art, Minimalism, Pop Art, Fluxus, Arte Povera, and Performance Art, to name just a few. It got larger and larger with each passing decade. Today it stretches over an entire century.

The trail left by the elusive smell of urine begins in April 1917, before the opening of the first annual group show of the Society of Independent Artists, of which Duchamp was a founding member and a director. The “readymade,” as he will later call his store-bought, mass-produced bathroom fixture, is submitted to be part of the exhibition. It appears in the catalogue under the title, Fountain. At the last minute, though, it is rejected, for reason of obscenity. Acting scandalized, Duchamp resigns. The Society’s decision, he claims, runs counter to its all-inclusive, open-minded policy.

The urine trail picks up again a few weeks later, when Duchamp asks his friend Alfred Stieglitz to photograph Fountain. Oddly enough, the famous photographer sets the porcelain fixture against a Victorian wallpaper with flowery motifs. The strange picture is subsequently published in an avant-garde art magazine, The Blind Man. From there it goes viral. It’s a scandal in the art world. Everyone talks about it. Duchamp’s Fountain is well on its way to be extolled as a major “marker” in the male-dominated 20th-century art world.

This narrative is only half of the story. It turns out that there is more to Fountain than just pissing-off the establishment.

In 1982, the scent-trail picks up again when new information surfaces. In a letter to his sister, discovered after Duchamp’s death, he acknowledged that it was “one of my female friends,” who, “under a male pseudonym, had sent a porcelain urinal as a sculpture" to the Society of Independent Artists.

Who was this woman? Why did she pretend to be a man? What could have been her motivation? Did Duchamp steal her idea? And if he did, how come she didn’t raise a fuss?

Among the female friends of Duchamp, one eccentric artist, Baroness Elsa von Freytag-Loringhoven, could be that mystery woman. A German poet, performer and model, she collected found objects and turned them into sculptures. Known for her scatological humor, she is the author of God, a readymade of sorts, a cumbersome object consisting of a cast iron plumbing trap mounted upside down on top of a wooden box. However, there is no mention, in her abundant correspondence, of the Fountain’s scandal.

A third possibility is the mysterious individual who signed the urinal. In German, “R. Mutt “ sounds like “Urmutter”— Earth Mother, the goddess of fertility and source of life. This hypothesis has the advantage of explaining the title of the piece.

Regardless of the truth— truth was not a high priority for Duchamp—it is undeniable that Fountain is more than simply what it seems: a “head” turned on its head. It is also its opposite. Not a flip off, but a wink. Not an obscene gesture but an embrace.

Indeed, to women, who are not familiar with men’s room fixtures, Fountain looks, at first glance, like a wide-open receptacle, a soft-edged, pear-shaped sculpture. Its form is that of a womb. It resembles the inside of a pistil. It evokes the promise of a flower. It is suggestive indeed, but not crude—more like a Georgia O’Keeffe’s blossom.

The connection with O’Keeffe might not be coincidental. As fate would have it, in the Spring of 1917, Stieglitz had fallen in love with her work, and was corresponding with her regularly. Though the future lovers had yet to meet, they were already entranced with each other. O’Keeffe was in the process of developing the flower paintings she is now famous for. She was already working on powerful abstract images of natural forms, some of them resembling giant polychromatic vaginas.

Stieglitz’s photograph of Fountain, with its strange flowery backdrop, is ambiguous enough to raise a legitimate question about the gender of the readymade. Is the feminized portrait of the urinal a direct reference to O’Keeffe’s flowers? Is it an important clue? Is it the only clue Duchamp wanted to leave behind? Let’s not forget that the photographic image is the most accurate representation of the readymade we have, since the original has disappeared, probably discarded by Stieglitz—with Duchamp’s approval—after the photo shoot.

There is no doubt that the Stieglitz photograph is a critical piece of the Fountain puzzle. It suggests that masculinity and femininity are reversible notions, each the flip side of the other. Gender is not set in stone—or in porcelain.  It is a fluid concept—a fountain of inspiration.

Today, in an age when gender identity is the topic of open debate, the “transgendering” of a urinal into a female form does not need to be shrouded in oblique references. Yet this dimension of Duchamp’s work is missing from the countless homages and tributes that celebrate the 100-year anniversary of Fountain.

Museums and galleries the world over are staging commemorative exhibitions, among them are Francis M. Naumann in New York, the Philadelphia Museum of Art, home of the world’s premier collection of Duchamp’s work, and Centre Pompidou in Paris. Their narratives stick to the official script: they mention the possible link between the alleged maker of the urinal, J.L. Mott Iron Works, and the enigmatic R. Mutt signature. They wax poetic about the introduction of the “readymade” concept. They propose erudite explanations for why Fountain has influenced numerous artists from Andy Warhol to Jeff Koon and Ai Weiwei.

In other words, they studiously distance themselves from the controversial “trans” aspect of Marcel Duchamp’s discourse.

Some independent initiatives stand out, though. Most intriguing is the project of American artist and designer Kenneth Carbone. He photographed actual urinals in the men’s rooms of museums that have acquired, for their permanent collection, existing, “authenticated” replicas of Fountain (ironically, these copies are handmade, not readymade). Carbone’s investigation is visceral, not highbrow. Though elegant and pristine, like freshly scrubbed porcelain bowls, his photographs are disruptive. They are reminders of the segregated nature of institutional restrooms but they also point to the segregated nature of our art institutions.

Carbone’s photographs are an attempt to challenge the cultural taboos that compel women to avert their eyes whenever they step in the “wrong” restroom and catch a glimpse of a urinal. With an Instagram campaign, a documentary film, and a commemorative book, he wants to break down the barriers symbolized by what he calls “the most polarizing piece of public plumbing.”

Urinals are seldom installed in homes. Only in public places do men’s bladders command a special installation—one that emphasizes the difference between the sexes and reinforces the perception that some of us can get relief standing up, in the open, shamelessly—while others must sit down in a cramped space behind close doors. Interestingly enough, in the private realm, where bathrooms are gender neutral, these distinctions are erased.

Today, as the thinking goes, sexual equality between men and women can only be achieved through enforced gender neutrality, also called “gender blindness.” Maybe this is the cryptic message of the photograph of Fountain published in The Blind Man: there is no difference between the genders, they are interchangeable—one and the same thing. 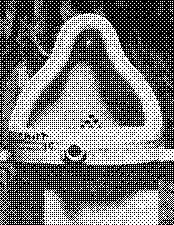 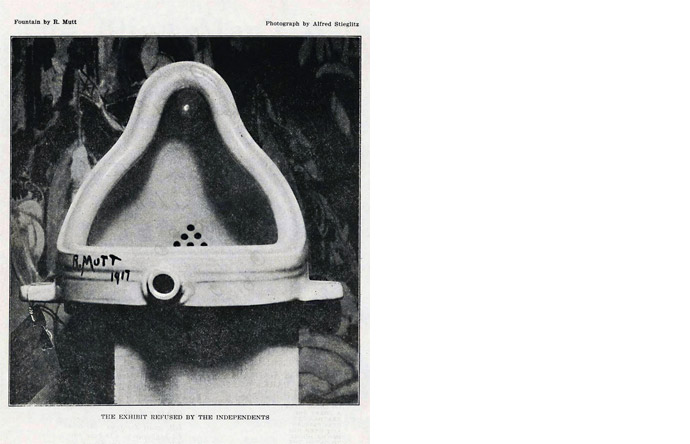 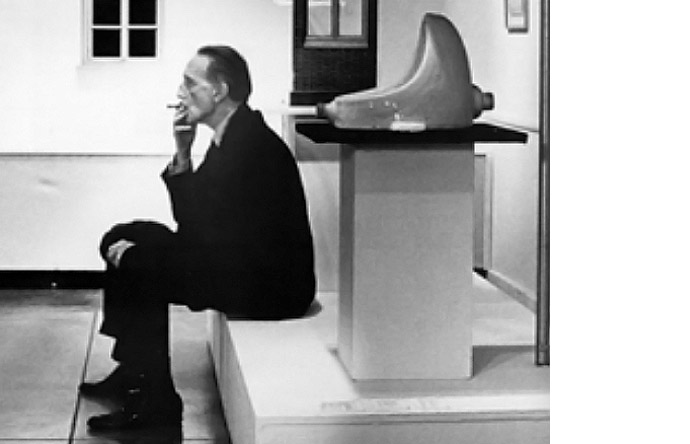 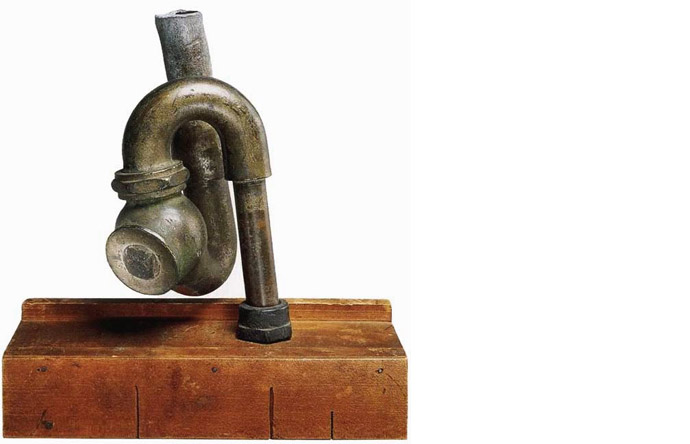 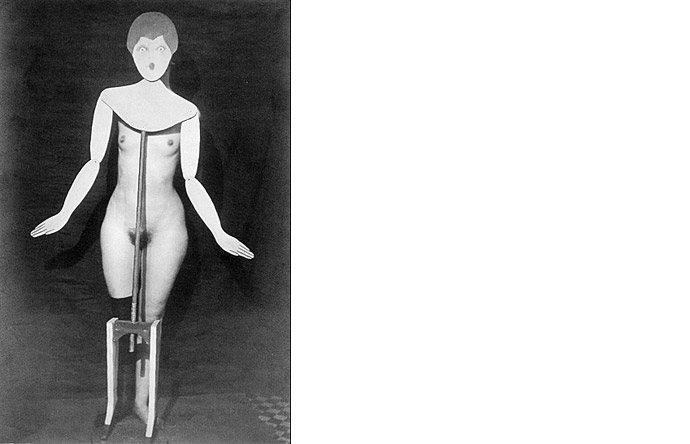 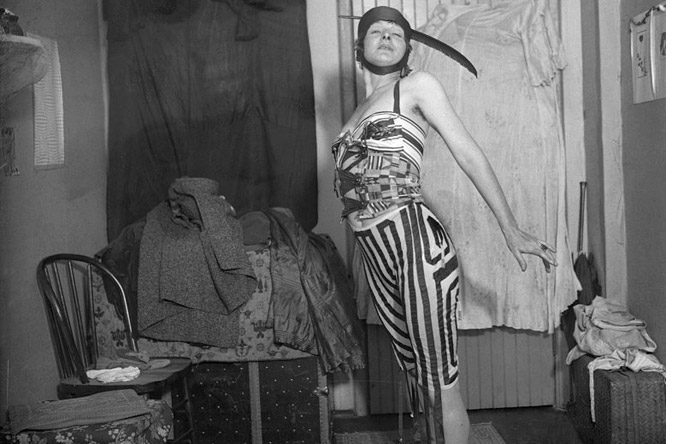 5/9-- The baroness was a perforner, a poet and an artist who collected found objects. 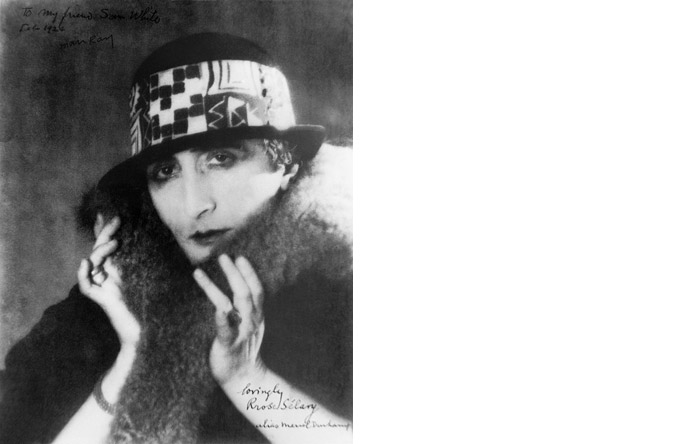 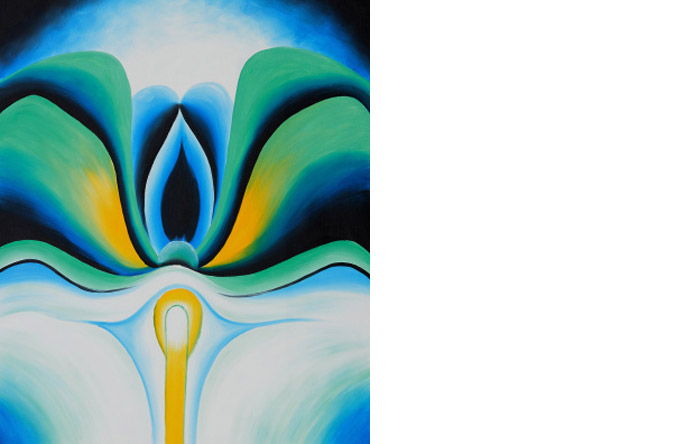 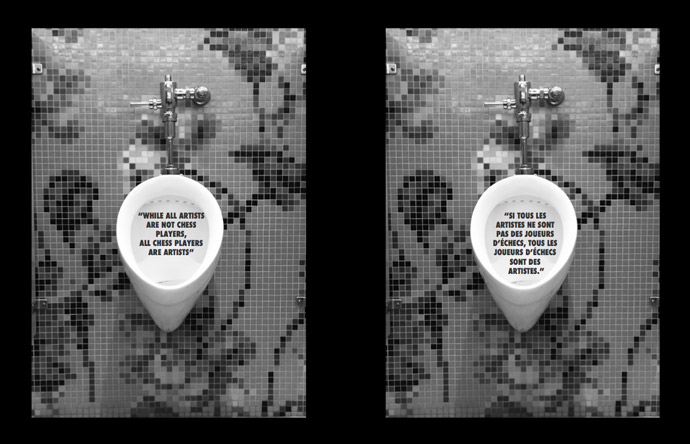 8/9-- By Kennett Carbone: the urinals in the men's room of the New Museum (quotes added). 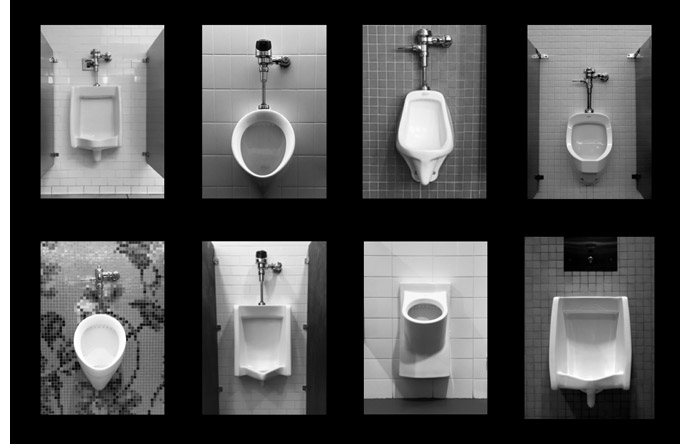