A Backyard In Flanders

Formerly the vegetable garden of an imposing mansion, the leafy backyard of the Wirtz family home has retained little of its erstwhile self. The two main alleys crisscrossing the four-acre square plot are all that’s left of the original plan. What the garden has retained, however, is its capacity to grow plants that feed a hunger and satisfy a craving — not of the stomach this time, but of the soul.

You step into the garden, and, unbeknownst to you, you’ve entered a zone. At first you are mostly aware of the smell of the earth, even though, in this late November day, all you can see in front of you is unseasonably lush greenery undulating, soaring and curling like patches of rolling fog. You close your eyes to concentrate on the intoxicating scent of moist sod and rich turf that makes you wish you were a slug, or at least a snail.

And indeed, as you fill your lung with this heady mixture of sweet-smelling organic compound and aromatic nitrogen-fixing bacteria, your metabolism begins to slow down. You ease into a semi-lethargic state. It gives the word “vegetative” a new meaning. That tingling in your limbs, even though it numbs your desire to move, is not a state of inertia. In fact you feel energized, thrilled — alert from head to toes.

Located in the small town of Bottlemelk, 30 minutes outside Antwerp, Belgium, the private garden of the Wirtz family had been neglected for more than thirty years when landscape architect Jacques Wirtz bought it in 1969. For the next 15 years, it served as a backlot where he stored his botanical props — his topiaries, hedges, and ornamental trees — and where he conducted gardening experiments, perfecting his fertilizing, pruning, and clipping techniques.

Though he had no intention at first of turning the wild patch of overgrown hedges and aging fruit trees into a showcase, over the years, the lot acquired a life of its own.

Situated in the back of the small brick house where he had moved with his wife and four children, the abandoned garden, in need of tender loving care, became a major family project. During their summer breaks the Wirtz children would spend thousands of hours weeding, clipping, and mowing while their tall, aristocratic mother stooped and kneeled to tend her beloved flowerbeds.

Soon, out of the chaos, a strange order appeared. The old boxwood hedges had been carefully trimmed to take advantage of their natural overgrowth and now looked like big puffs of whipped cream. Sugarloafs of clipped yew were clustered next to neat scoops of evergreens. Handsome blocks of dark foliage looked as appetizing as moist wedges of gingerbread. Candy-colored magnolias and dogwood trees blossomed randomly all year long.

In winter, when this Lewis Carroll landscape was iced with frost or light snow, the place was even more of a feast for the eye. By 1990, when Martin and Peter Wirtz were ready to join their father’s landscaping firm, the former vegetable garden had become something of a legend among garden connoisseurs. Though not open to the public, it is often listed among the top most beautiful gardens of Europe.

A recent coffee-table book of breathtaking photographs by Marco Valdivia is its ultimate consecration as a magical place. Though not on the same scale as Versailles, Giverny, Eyrignac, Tivoli, Sissinghurst, or the Tuileries (a section of which has been redesigned by Jacques Wirtz five years ago) this modest patch of earth in Flanders nonetheless lives forever in the imagination of those lucky enough to visit it.

Yet, as beautiful as it is, the garden is not “inviting”. It’s a private realm that would keep noisy crowds at bay if they came in its vicinity.

The plants, at first glance, appear to be pagan creatures immobilized under some sort of spell. In the foreground, the wavy rows of unevenly-clipped boxwood, as intricate as cloud formations on Tibetan scrolls, cast strange scalloped shadows on the silky-smooth surface of the dry, sandy walkways. Behind, huddled together in silent expectation, their hooded silhouettes sticking out of the shrubbery like sentries on the lookout, groups of topiaries form small compact battalions. Still standing at the edge of the garden, you hesitate before taking a first step into this well-guarded domain. On the left of the main alley, a pristine lawn, the texture of the finest velour, is so intimidating in its perfection it might as well be a “no trespassing” sign.

Most secret gardens are fenced in, surrounded by tight railings or protected from view by tall hedges. Though the Wirtz private garden is hidden, for the most part, behind a stockade of clipped hornbeam or beechwood, it owes most of its mystery to the fact that it defies comprehension.

Try as you might, you cannot identify its style. Its plan, in the form of a Greek cross, is reminiscent of the enclosed medieval gardens, while its alleys, bordered with fantastic-looking hedges and oddly-shaped topiaries, offers romantic vistas in the Victorian tradition. A postmodern palimpsest as well, the garden accumulates pre-Wirtz iterations. It integrates 200-year-old moss-covered fruit trees (apple-, pear-, and mulberry-trees), the last remnants of a dense orchard, as well as ancient, ornamental weeping cherry trees, left to blend in with the thick undergrowth. The minute you think that you perceive the presence of an overall design you turn a corner and all you see is a patchwork of abstract forms and pixilated foliage.

...or a Baroque sanctuary

Your contemplative pause, at the edge of the garden, comes to an end when a sudden break in the clouds turns the place into a kaleidoscopic play of lights and shadows. Consciously or not, Jacques Wirtz has created in his own backyard a Baroque theatrical decor, complete with special effects that are not unlike those devised in the 17th century by architects Borromini or Jules Hardouin-Mansart. Bright leafy surfaces, shimmering in daylight, contrast with deep trenches cut between two hedges.

While some topiaries are festooned with a fresh growth of pale green shoots, others are hidden in the shade, like so many unforgiving, swarthy statues. Shafts of sun penetrate in diagonal, illuminating the top of a patch of tall grass, projecting the outline of a nearby tree on the side of a hedge, or revealing the perfect geometry of an alignment of cubic topiaries. Your traipse around — and around again — lost in a maze whose way out you are in no rush to find.

In spite of its visual complexity, the Bottlemelk garden gives the impression of having sprung from a single root system, as if by some mysterious organic collusion. Its ethos is that of a peaceable kingdom in which plants thrive in happy symbiosis, seamlessly protecting, fertilizing, fumigating, shading, fanning, stroking, and nuzzling each other.

The Wirtzes, so exacting in their care of trees, topiary and shrubs, are encouraging, in some places, an untidy cross-pollination. They’ve let patches of thorny weeds grow under the coral-red canopy of Prunus trees, watched approvingly as funky clumps of water ferns nestled between soggy reed stems, and applauded as a thick carpet of Fall foliage turned alleys into slippery lava flows. They didn’t bring out the leaf-blower when, Winter approaching, the place was strewed with deciduous confetti of all shapes and colors.

They were pleased when the pruned evergreens in the back of the garden looked positively giddy covered with red, purple and yellow serpentine streamers — the windswept content of some giant autumn piñata. They took special pride when the hornbeam leaves, as bright as flames, turned hedges into burning bushes and when, on their pristine lawn, fallen apples began to ferment into molten balls of sweet cider. 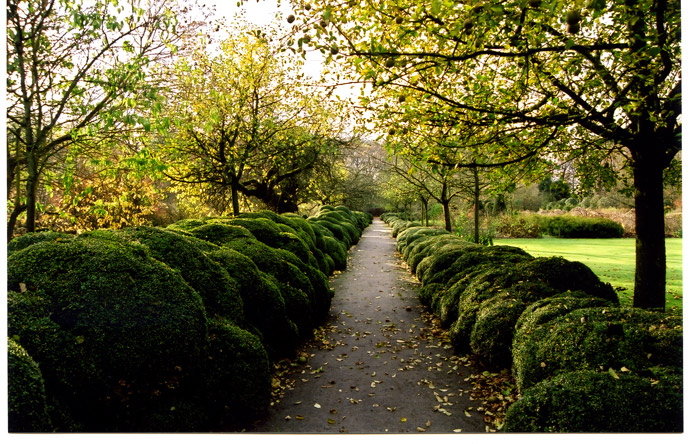 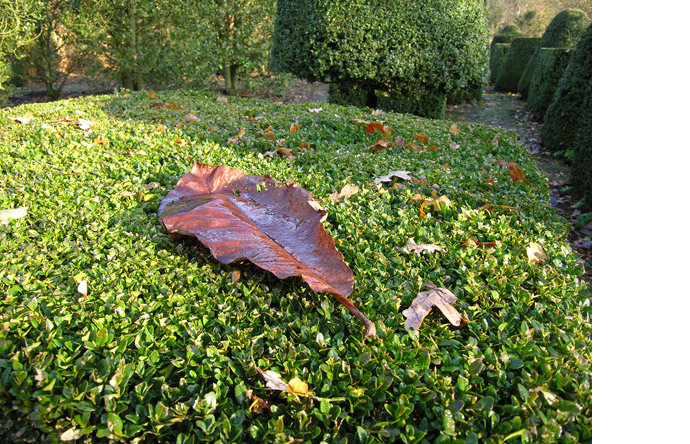 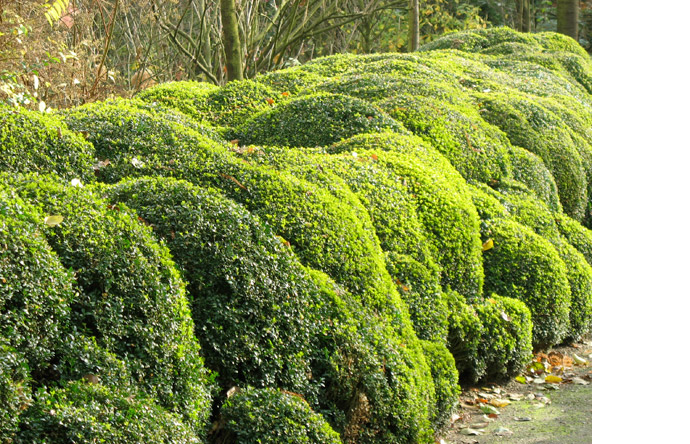 3/10 - Lush greenery is undulating, soaring and curling like patches of rolling fog 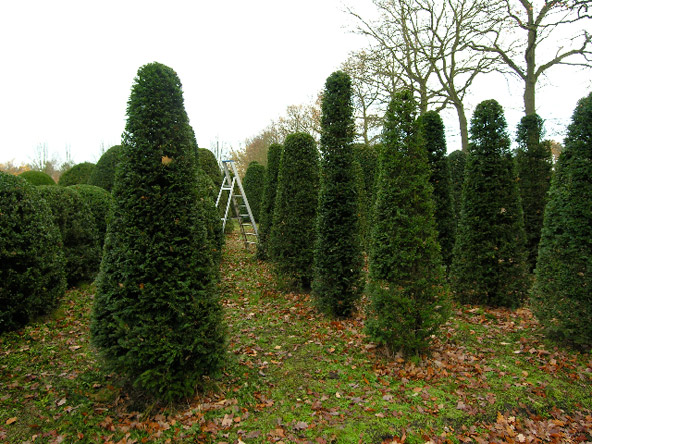 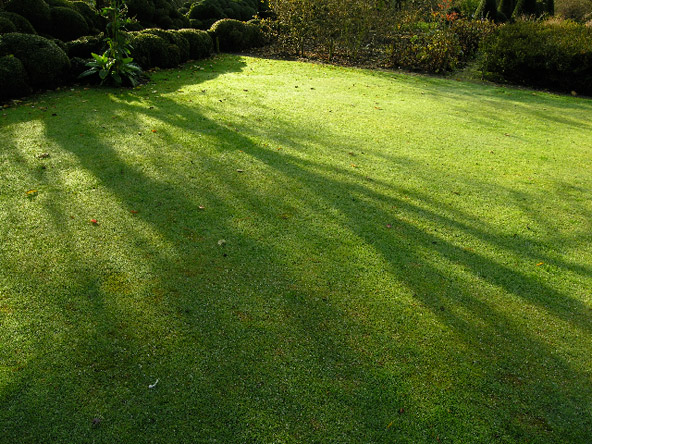 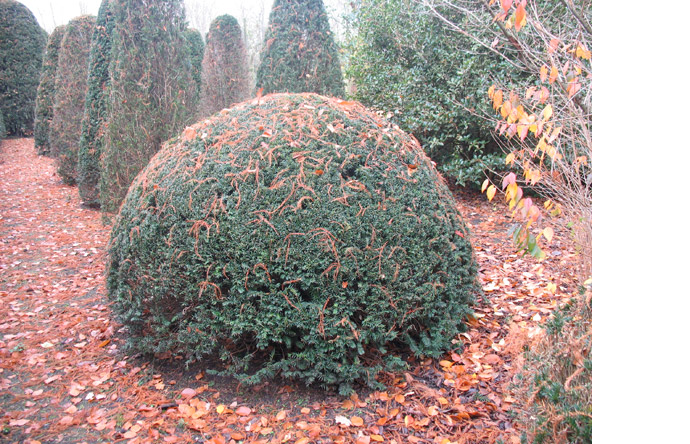 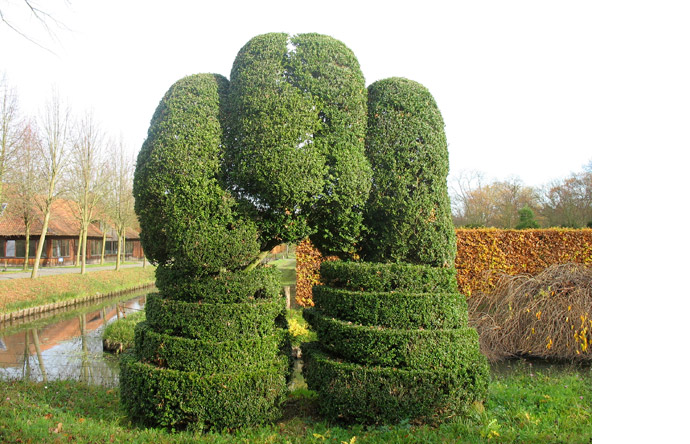 7/10 - Twin topiaries are temporarily parked near a canal, 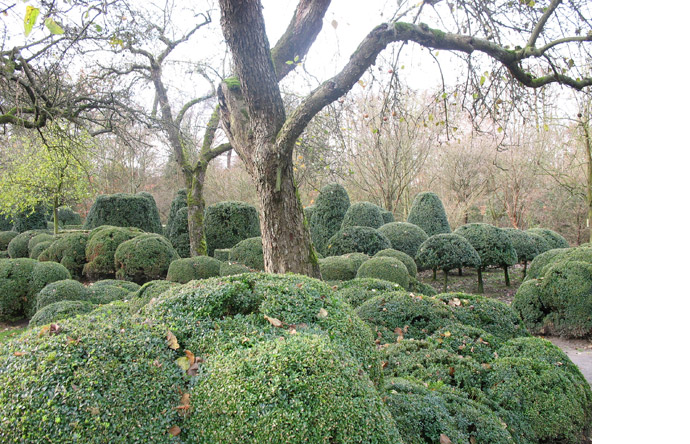 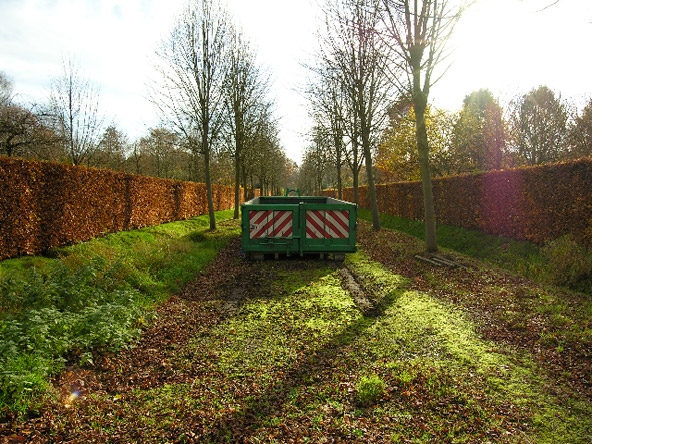 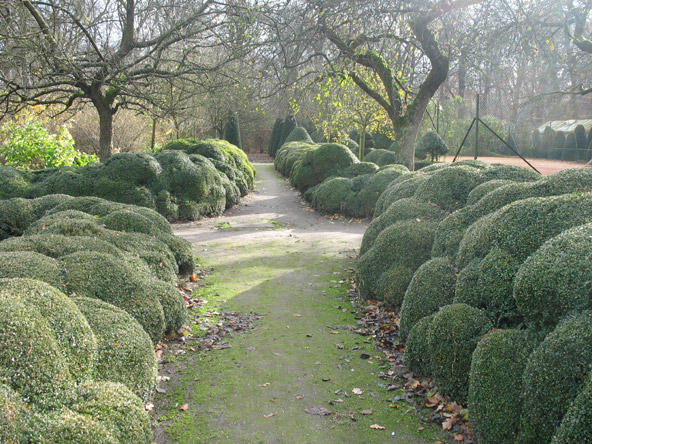