Could the scholarly BnF manage to show salacious material while remaining true to its curatorial mission?

Few projects highlight the delicacy of these choices more than exhibition design, where objects usually kept behind metaphorical or real velvet curtains are set before the public eye. Three museums, two in Paris and one in New York, have grappled with these choices recently. Their approaches highlight the challenges faced by exhibition designers of any nationality as they address the cultural moeurs of their clients and audience.

Laurent Ungerer and Jean-Baptiste Taisne, partners at C-Album, a French studio specializing in cultural projects, carefully considered the five options above when the Paris Bibliothèque Nationale de France (BnF) tapped them for an unusual assignment: The staid national library needed a poster and catalogue for an exhibition of a pornographic collection being unveiled after centuries of secrecy.

The show, which closed last March, was fetchingly named “L’Enfer de la Bibliothèque, Eros au Secret” — Hell in the Library, Eros in the Closet — referring to a pun on the word “enfer” (“hell”), which is also short for enfermé, meaning “locked up.” “Hell” was also the nickname librarians gave to the locked closet where dirty books were kept.

Still, it was sure to attract curious visitors from all over France and astute Parisian critics alike, all dying to see whether the scholarly institution would manage show salacious material while remaining true to its curatorial mission.

Surprisingly, the controversial nature of the material proved a unifying rather than a dividing force at the library. “What made this project appealing was the fact that people involved at the BnF felt personally responsible,” says Taisne. “They put aside all internal strife between various departments and collaborated. Too much was at stake — no one could afford public humiliation.”

Ungerer and Taisne had decided on a typographical approach for the poster when they learned they had also been selected to collaborate on the exhibition’s interior design and exterior promotions. Their client for this multi-part assignment was not the BnF but Agence NC, an exhibition design firm whose impressive track record includes many prestigious institutions and museums. “All the preliminary research we had done suddenly came in handy,” says Taisne, “and, as it turned out, we used more than one approach.”

Their solution for the museum’s outdoor signage was simple but monumental: The designers proposed a giant pink X to grace the front of one of the library’s four towers, facing the Seine. It was a perfect statement, simultaneously signaling “X-rated” and celebrating the BnF’s 10th anniversary; the X’s innocuous function as a Roman numeral won over more conservative library staffers. To make the giant statement, the designers put up 40 pink shades forming a 90-foot geometrical cross glowing against the silvery glass façade.

Another, previously unplanned part of their project made an equally bold statement. Ungerer contacted someone he knew in the special events department of the Paris métro (RATP), and suggested a publicity stunt: Put an erotically themed art installation in an abandoned subway stop called Croix Rouge (meaning “Red Cross,” or “Red X”—a nice tie-in with the X on the BnF façade).

Patrice Brugères, a RATP project director who had previously collaborated with Ungerer, approved the idea. “We like C-Album because they understand the mentality of subway riders,” he says. Plus, the installation, designed to be seen from a train moving at 30 miles per hour, would be little more than “a pink blur barely interrupting the reverie of our commuters.”

A number of subway operators elected to slow down when driving by, but it was still difficult for riders to see much. “It was frustrating because one could never see enough,” says Ungerer. “But we wanted it to be frustrating. Eroticism is all in the imagination. Some passengers complained that it was too suggestive, others that it was too tentative. Only one thing is sure: we got a lot of press for it.”

In fact, the RATP took a real risk by placing these images behind a veil of secrecy. For the French, paradoxically, not quite showing what cannot be shown insures its power to shock and titillate.

“The installation evoked the darkness and secrecy in which the obscene books had been kept,” explains Ungerer, “in contrast with the exhibition where, for the first time, they would be exposed to light and public scrutiny.”

A show about censorship

For Agence NC, that difference between hiding and exposing salacious material became the basis of the show’s presentation. Agence NC founder Natalie Crinière put Helène Lecarpentier, an architect and trusted a collaborator, in charge of the thorny project. Lecarpentier quickly figured out that the exhibition’s topic was censorship as much as the censored works themselves — an important point that the BnF brief had failed to identify, but which turned out to be the linchpin of the exhibition.

She doubted many people would bother studying the archives documenting police raids and book-burning orders, but she was convinced that, without them, the exhibit would have no credibility.

So, while long, curvy display tables occupied the brightly lit hub of the exhibit, more intimate exhibition spaces on the perimeter welcomed a crowd of de facto rubberneckers leaning over cases or gawking at framed images.

“This was intentional,” explains Lecarpentier. “We wanted people looking at the art to be as visible as the art itself.”

For the exhibition’s audio component, Taisne designed large pink felt cones in which visitors had to stick their heads to hear recordings of salacious poems and songs. The cones were intended to block sound, though, not censor the experience.  “We tried to avoid the sense that the material shown was so embarrassing that it could not be viewed publicly,” says Lecarpentier. That strategy apparently worked. “Enfer” was a huge success, with more than 50,000 visitors recorded before its closing date.

One man in Paris warily observed the BnF show’s progress. Joseph Kalifa is one of two partners of the private Musée de l’Erotisme, an 8,000 square-foot space dedicated to sex. Whereas people lined up for hours to get into “Hell,” only a few individuals a day venture to the cavernous, seven-story townhouse that’s home to  Kalifa’s wild collection of erotica. Located half a block from the Moulin Rouge, the Musée de L’Erotisme takes a friendly, no-nonsense approach to sexual materials.

Traditional display cases hold suggestive figurines and sex toys from all over the world, while video installations, large sculptures, and framed artwork and photographs hung on white walls round out the collection. “Honesty and humor are important elements of our selection,” says Kalifa. “We have a lot of folk art pieces as well as special exhibitions featuring contemporary artists. Our goal is to de-dramatize the subject matter and have fun in the process.”

But he gets practically no press, and wonders why. “Granted, our museum is a bric-a-brac. We lack erudition. But we are marginalized because we don’t play the politically-correct game.”

By “playing the game,” he means creating an intellectual discourse around the material exposed, a technique long adopted by contemporary artists when exhibiting their controversial work. But at the Musée de l’Erotisme, the only discourse is the context of the red-light neighborhood that Kalifa and his partner chose as home for their collection.

If they had picked a different location — let’s say the trendy Bastille district — they might have been perceived as cool by art-savvy Parisians.

Sex and the city

As for the challenge of explicit material, he says, “It was not that different from designing the interior of a lingerie store, something we did recently for a big client,” he says. “Today, more and more, sex is considered a cultural topic like any other.”

Sponsorship aside, though, the museum’s attendance has increased steadily, which, again, can be attributed to an intellectualized approach to very visceral subject matter. “Anybody can get a building, throw some stuff in it and call it a museum,” says MoSex’s Noelle Daidone, “But we’re approaching it academically.”

It’s a tactic that could help promote a more liberated approach to eroticism, especially in America, where the more explicit an image, the more daring it is supposed to be.

In libertine France, mystery is what fosters sexual desire, and the less explicit an image, the more daring it is — one more reason why the BnF could display dirty pictures without its reputation being sullied. Ultimately, both the American and French exhibitions seem to have succeeded at making the illicit acceptable, no mean accomplishment. As Jacobs puts it, “If people can just look at these things as objects, that’s such a miracle.” 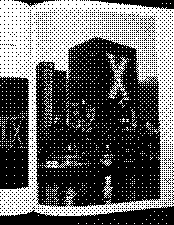 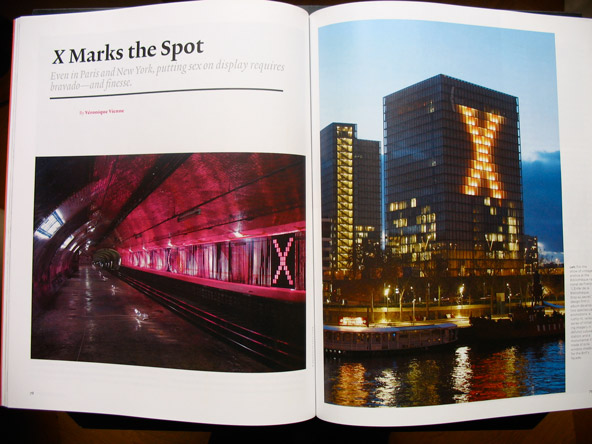 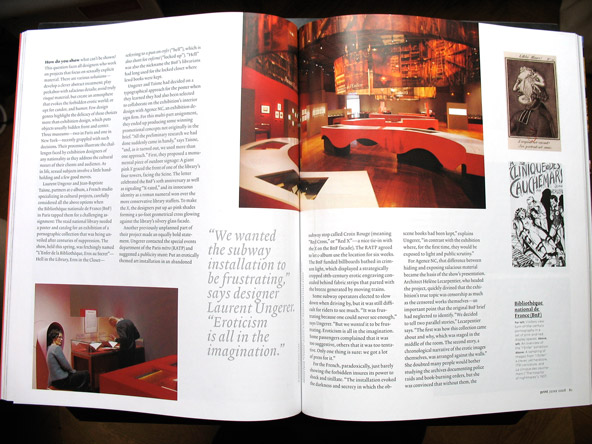 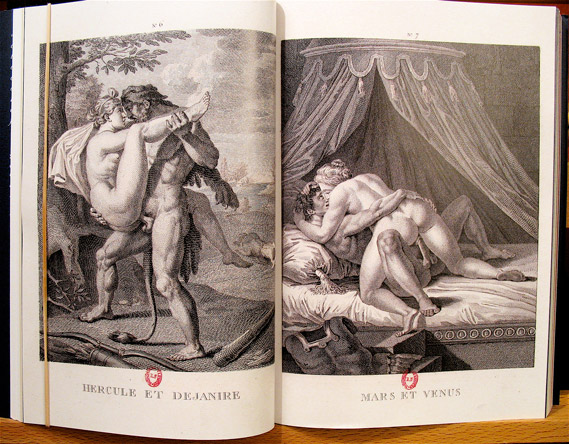 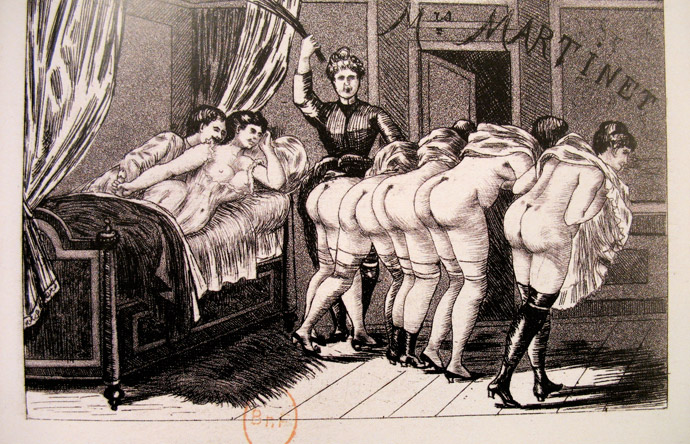 4/7 - One of the more innocent engravings at the BnF 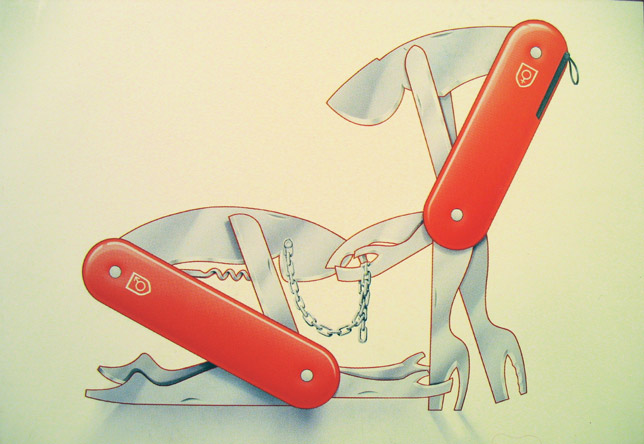 5/7 - From the Musée de l'érotisme de Paris, a postcard by Julian Murphy 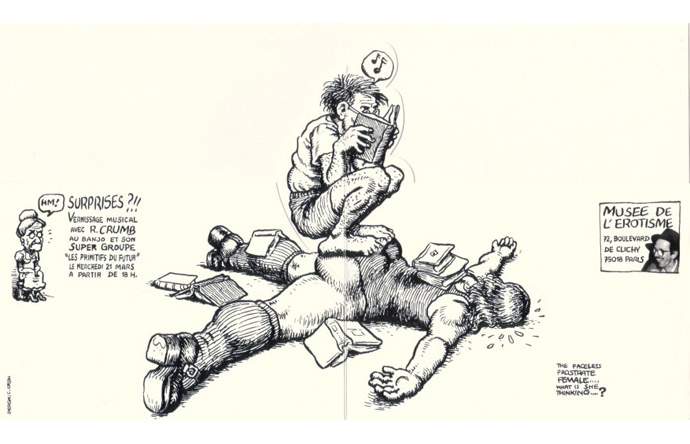 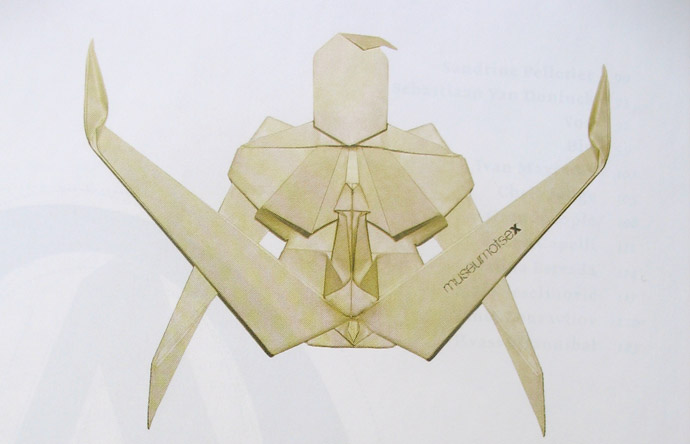