What happens when you are working with clients who are as broke as you are? “ You eat potatoes and sell your car.”

Poster designers of yesteryear are often called artists, Alphonse Mucha, A.M. Cassandre, Lucian Bernhard, Herbert Matter, El Lissitzky, and Paul Rand among them. Today, chances are even Milton Glaser would hesitate before claiming to be an artist, his most artistic endeavors classified as “illustrations.”

Their early CD covers, for the Verve record label in particular, and their museum posters and catalogues for the Musée d’Art Moderne de la Ville de Paris, all had what can best be described as a painterly quality, with lyrical type treatments and a baroque esthetic reminiscent of the ’70s Fluxus movement.

Their design projects for corporate clients, like a CD-ROM for a division of the petrochemical giant Elf, a web site for the communication firm Cegetel, or a brochure for Hewlett-Packard, betrayed their artistic sensibility as well: They used riotous colors and a pictorial vocabulary of drips, splashes, and squiggles that suggested abstract expressionism.

As if to temper their more exuberant impulses, they borrowed the typographical mannerism of the American and British designers they admired, notably April Greiman and Neville Brody.

Challenging every statement and hashing out every assumption is what the Labomatics call “variable geometry,” a triangular form of dialogue in which they each take turns having the last word.

The fact that they eventually come to a consensus is a minor miracle — and a measure of how dedicated they are to putting their work before their egos. Still, they could not hide their independence of spirit when they launched the studio. As a result, the assignments came trickling in; clients, wary of what they perceived to be a fastidious approach, kept asking them, “So, are you artists or graphic designers?”

That is why, instead of attempting to create a seamless practice, Bortolotti, Ledoux and Béjean chose to approach graphic design as only contemporary artists would, using the same intellectual criteria used to judge art or literature. This strategy has paid off for the talented M/M Paris duo (Mathias Augustyniak and Michaël Amzalag) who have been able to impose their turbulent esthetic and have a demiurgic cachet that often transcends their clients.

Similarly, Labomatic™ has, at long last, secured a very special niche: Today, the firm enjoyes the reputation of being cool but not hip. The designers’ work is recognizable because it doesn’t fit into any category that can be named. Sometimes it’s beautiful, sometimes not. It can be sophisticated or, on the contrary, pedestrian. Only one thing is sure: The design is always original.

The Labomatics’ Web site for the radio station of Arte, the premiere European cultural TV broadcaster, is a bold composition of color fields, its throbbing palette of reds, ochres, and purples making no concession to a more effete sensibility; their identity program and poster series for the avant-garde theater Nanterre-Amandiers feature provocative photographs from a stock house that specializes in discarded snapshots found on sidewalks; their design solution for promoting an exhibition called “Urgent Painting” for Musée d’Art Moderne in Paris is to show a series of blurred images of the paintings zooming, full speed, past the lens.

And deserving the name of “conceptual artifacts” are the unusual pieces they have designed to promote the various shows at the trendy Magda Danysz gallery, a contemporary art omphalos located across the street from the famous Bibliothèque Nationale François-Mitterand.

Like the visual language they have adopted, the Labomatics are the product of the “sampling” culture. Their work is the result of the re-mixing of their various talents, with edgy photography, abstract forms, saturated colors, and fashionably-unfashionable typography sharing the page with obscure cultural references, ironic pastiches, and alarming non sequiturs.

Operating on a small scale from their no-frill studio at the back of a sunny courtyard in the Bohemian 20th arrondissement — and working with clients who are often as broke and as cutting-edge as they are — is the source of pride.

“You eat potatoes and you sell your car,” says Béjean, facetiously. “And little by little you get used to having less, and it’s great.”

“Or you marry a rich woman,” quips Frédéric Bortolotti.

Having emerged from editorial backgrounds, the founding members of Labomatic™ are never at a loss for words. Bortolotti, the most opinionated spokesperson for the group, concedes that he has an explanation for everything, a talent he capitalizes on when presenting work to clients.

The firm’s proposals read like manifestos, or like a series of philosophical musings, the whole thing peppered with quotes (from Paul Klee, Indiana Jones, or William Gibson), inside jokes (calling misshapen shapes “Dformes™”), and clever apartés — sardonic use of corporate jargon.

The whys and therefores

Long-winded by U.S. standards, the designers’ rationales do not always do justice to the quality of the thinking. Case in point, their brilliant identity program for ENSAD, France’s top design school, which was rejected as “too provocative.”

One wishes the Labomatics had done without the elaborate whys and wherefores and instead focused on the essential element itself: A refinement of their “generation/s 2001” proposal, the component was a sophisticated software that would have allowed every teacher and student to use their own artwork to create original documents, letters, posters, invitations, brochures, and leaflets while at the same time conforming to a dynamic and truly interactive ENSAD brand.

“Société Anonyme®,” an Ultralab™ experimental project, seems to show that the firm’s conceptual irony does not always engage the targeted audience. To question the value of logotypes, the Labomatics had asked a number of graphic designers to create logos for so-called clients, never disclosing that the assignment was fictional. Each designer was given the name of a reasonably well-known artist to work on (among them Matthew Barney, Francis Picabia, Japanese artist Icon Tada, or American painter John Currin).

Unaware of the scheme — and clueless about the art scene — the commissioned designers had produced mundane logos more suitable for pharmaceutical multinationals or specialty gourmet products than for avant-garde artists.

Labomatic™ should have gotten some publicity for the project, but the operation failed to raise eyebrows, even from the people who should have been insulted.

In 2009, Bortolotti, Béjean and Ledoux had a friendly parting. Today, they still collaborate on Ultralab art projects, but handle other assignments as separate entities. I recently visited Pascal and Nicolas in the old Labomatic™ studio where they now team up with Olivier Körner to produce work of outstanding quality.

"How do you think we should describe what we do?" they asked. "How should we refer back to Labomatic? We are the same, yet different."

This is my long-winded answer to their question.

“Style is a simple way of saying complicated things,” said Jean Cocteau. This quote comes to my mind to describe the work of Pascal Béjean, Olivier Körner, and Nicolas Ledoux. Style is a rare quality today, one not usually associated with graphic communication. But the three principals are inspired practitioners whose special talent, it seems to me, is to clarify and inform, more than explain or demonstrate.

Their work has a lot of flair while being readable. How do they do it? I think that it’s very simple: they work like craftsmen do, perfecting their designs by giving equal attention to the subject matter and the material at hand. The pleasure one experiences in front of their posters, brochures, branding or packaging programs, is due to the fact that the object itself and its graphic content seem inextricably bound. You decipher the message with your fingers as much as with your eyes.

Their studio, on rue des Cascades in Ménilmontant, specializes in design projects that promote contemporary art and performing arts events. The partners put a premium on typographical excellence, but the visual codes of photography, fashion, and music often find their way into their graphic vocabulary. They are trained in a number of different disciplines: Pascal is a photographer, Olivier’s background is in telecommunication, while Nicolas is an architect. Independent thinkers who share a passion for visual analysis, they reinvent each time the way they collaborate on an assignment — one of the reasons their work never feels stale. 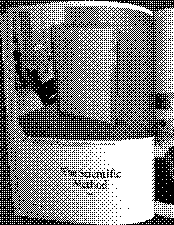 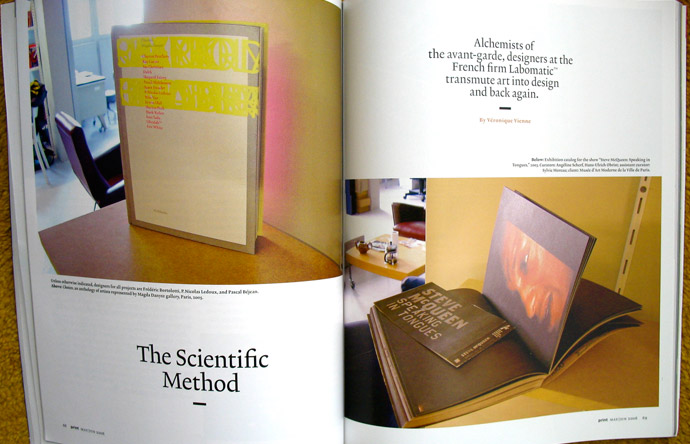 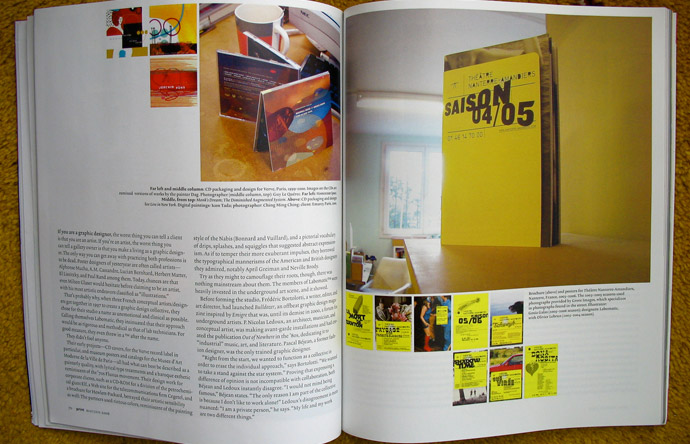 2/12 - An assortment of CD packaging, brochures and posters 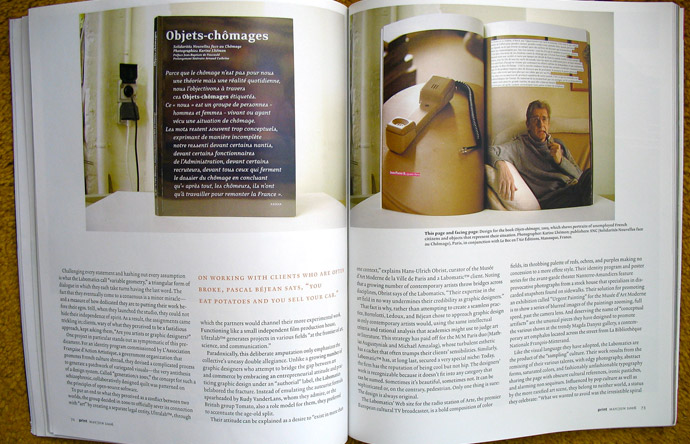 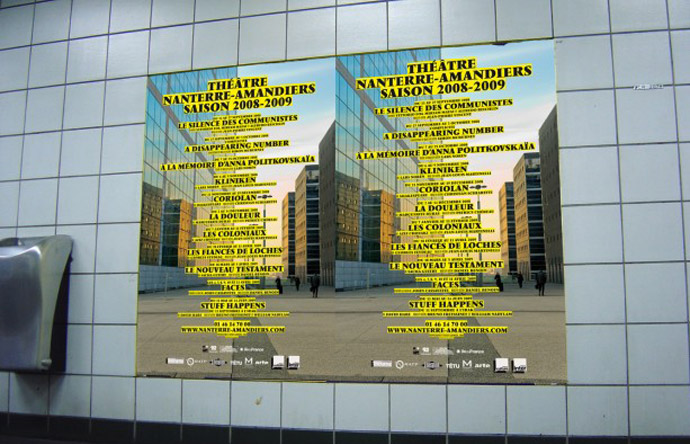 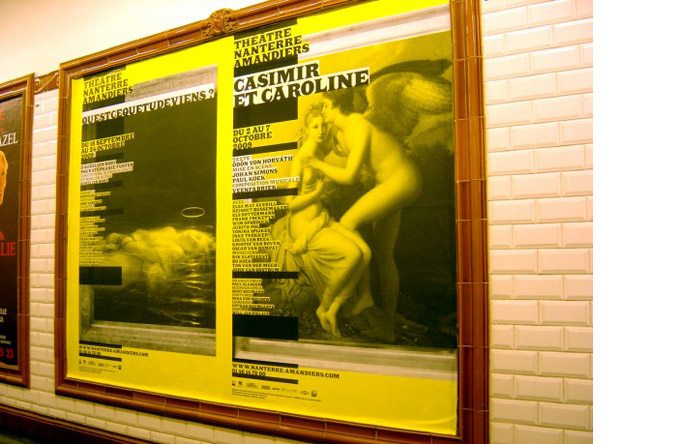 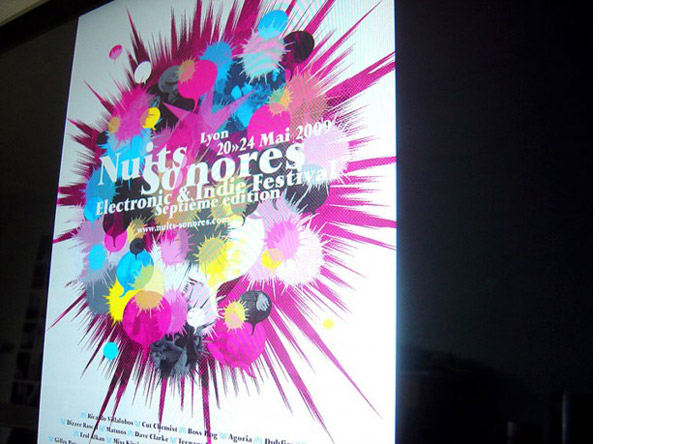 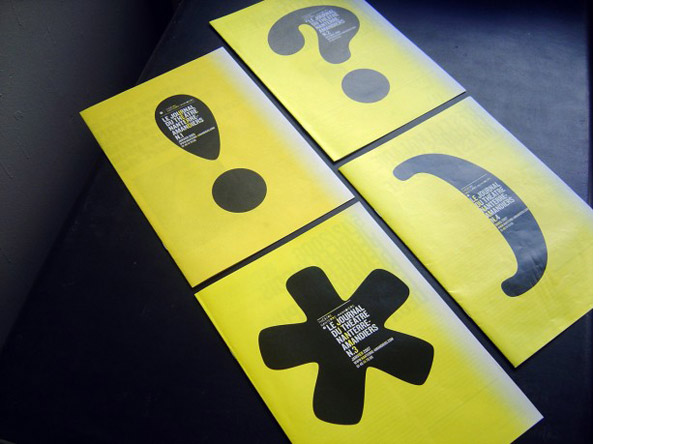 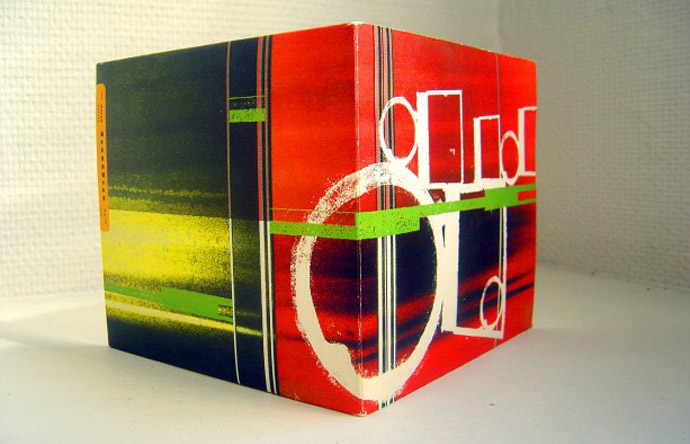 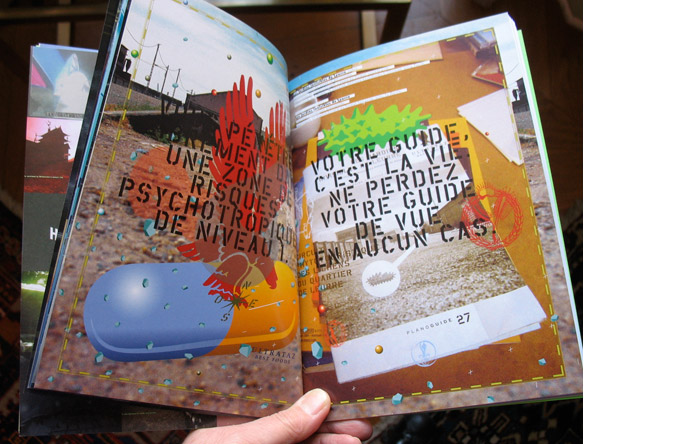 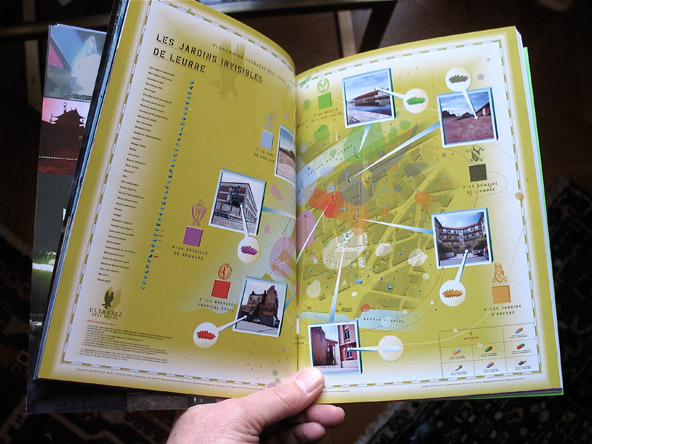 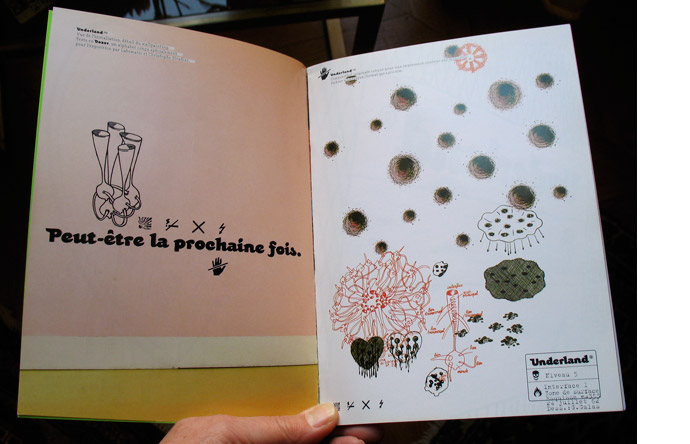 12/12 - "Underland", detail of an art exhibition catalogue by Ultralab