Before you explore the content of "Obey, Supply & Demand", a book documenting the work of Shepard Fairey, creator of the cult figure André the Giant, may I suggest you go to www.nograffiti.com?

Once there, take a look at the photograph of the two seniors from Phoenix, Arizona who recently received a Lifetime Volunteer Service Award from George W. Bush for their anti-graffiti activities.

Then click on to open the other links: the Tripwire vandalism surveillance cameras, the VandlClean graffiti removers, and the anti-graffiti art contest. And while you are there, scroll down the “news” section and read all about the latest research: according to a British medical journal, people who live in areas with graffiti are more likely to be obese.

There is no better introduction to “Obey: Supply & Demand – The Art of Shepard Fairey” than to assess the paranoia that preys upon conservative taxpayers today.

When Fairey inadvertently launched his stenciled sticker campaign, some 15 years ago, America was a different place. One could look at the crudely drawn face of a 7’4”, 520 lbs. French wrestler and see it for what it was, an in-joke for skateboarding hipsters and their punk-rock friends.

We were still amused five years later, in 1993, when what had started as a prank turned out to be a cultural phenomenon, and André’s name had to be dropped over some copyright issues prompting Fairey to rename it the OBEY Giant.

Subversion in those days was a benign art form. Bill Clinton was in his first term, his vice-president Al Gore had not “invented the internet”—not yet—and O.J. Simpson was still a national hero.

That was then! Today—2.5 million Giant stickers later—an alert observer is more likely to spot a battery of surveillance cameras above an overpass or on the side of a dilapidated building than see the familiar face of Fairey’s celebrated underground icon. Yet, somehow, the time seemed right for Gingko Press, the California publishing house that has no less than twelve titles by Marshall McLuhan in its catalogue, to release a monograph documenting Fairey’s remarkable graphic production.

The timing of this publication is eerie. Indeed, in today’s political context, with the alleged war on terror a covert form of terrorism itself, the massive coffee table volume, handsomely designed and smartly laid out, makes Shepard Fairey seems disturbingly quaint.

The troubling thought that comes to mind while flipping through the book is whether the kind of irony that Fairey’s work exemplifies has served us well, or whether it was a complacent form of subversiveness.

Rather than defy the powers that be, Fairey, like so many other guerrilla street artists of his generation, chose to mock the authorities. Witness, the cover he designed for his book: the thick, cloth-bound volume is gold-stamped with a large intricate emblem that looks exactly like a police badge, with the word “OBEY” above it all.

For Fairey, the injunction “Obey” was, and still is, an incentive for “people to do the exact opposite, or at least question obedience,” he explains in an interview with Steven Heller reproduced in the book. But does sarcasm invite civil disobedience? Or does it lead to cynicism?

Can the black humor favored by Fairey and other graphic design activists truly inspire Americans to question propaganda and rebel against it?

Milton Glaser who co-authored “The Design of Dissent” with Mirko Ilic, is most concerned with our total immunity to outrage. Remarking on the effectiveness of graphic design as a tool of dissent, he noted that we have “to overcome the endless assault on our sensibilities by the official voices of the government. Every day our mind is battered by messages that often tell us total lies about what is going on.” He worries that the voices of opposition are trivial compared to those of the government. “What we need,” he adds, “is 100 times more dissent that appeals to people's intelligence.”

Fairey’s work does appeal to an intelligent crowd. His place among graffiti artists is that of an intellectual. He quotes Marshall McLuhan, Heidegger, and Guy Debord. His graphic sensibility, so comprehensively displayed in his book, is that of an accomplished designer.

His recent work in particular is surprisingly smart and beautiful, even though he still uses a limited visual vocabulary inspired by Maoist propaganda posters and their predominantly red, black and yellow palette. His imagery pokes fun at dictators and cult figures—from Gene Simmons of KISS fame to Lenin, and from Marcos, the leader of the Zapatistas to Patty Hearst and Bob Marley.

Yet, as stunning a portrait gallery as they are, these latest posters—part stencils, part graffiti, part collages—are not as provocative as his early André stickers. And sure enough, the strongest sections of the book are the ones that document the history of the André/Obey giant and feature pages after pages of sepia photographs of streetscapes in which one can spot the wild Orwellian postings of the Giant: haunting images of Big Brother watching over urban decay.

A tribute to Chomsky

But the Giant’s emblem, whose reason for being was the fact that it was a trademark for a product that did not exist, is now a brand image for an apparel company.

The OBEY trademark and its slogan “Manufacturing Quality Dissent Since 1989” can be found on Tshirts, hats and sundries fashion items as well as skateboards, posters and even toys. Ironic? You bet. A reference to the cult movie Manufacturing Consent, the tagline is an overt endorsement of Noam Chomsky's propaganda theories.

Yet the marketing copy is a classic co-opting exercise: “Obey urban fashion,” it reads, “is the logical extension of Shepard’s street art campaign and a reflection of his personality. The line embodies his graphic design style, sense of humor, ‘question everything’ politics, and ‘basics with a twist’ fashion sense.”

Fairey does not feel that he needs to apologize for capitalizing on his underground fame to make the money he needs to support his peel-and-tape, sticker and poster campaign. On numerous occasions, he is still out there, defying the authorities, posting the likeness of the giant on empty billboards, forlorn construction fences, blank walls, and on the backs of street signs.

While clandestine, his activities are not a direct attack on private property, he insists. He only wants to create a counterpoint to the thousands of advertising and propaganda messages that assault us on a daily basis.

The subtitle of the book, “Supply & Demand,” clearly acknowledges the ambiguity of Fairey’s position in the market economy. An occasional criminal (he has spent many nights in jail for “vandalism”), Fairey is also a successful businessman in the great American “self-made-man” tradition. To his fans, he is the proof positive that anyone with a dream can make it. But, in hindsight, aren’t we all a little too accommodating with a system that neutralizes its smartest detractors by turning them into celebrity entrepreneurs? 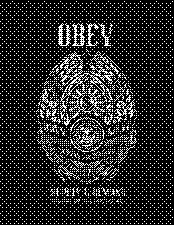 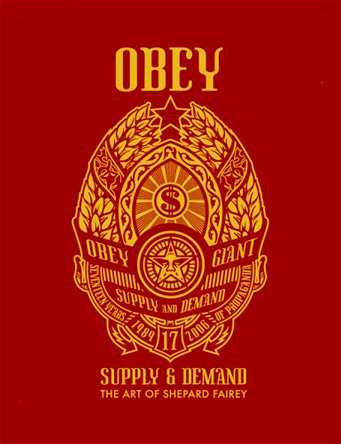 1/12 - "Obey" is a brand that promotes civil disobedience 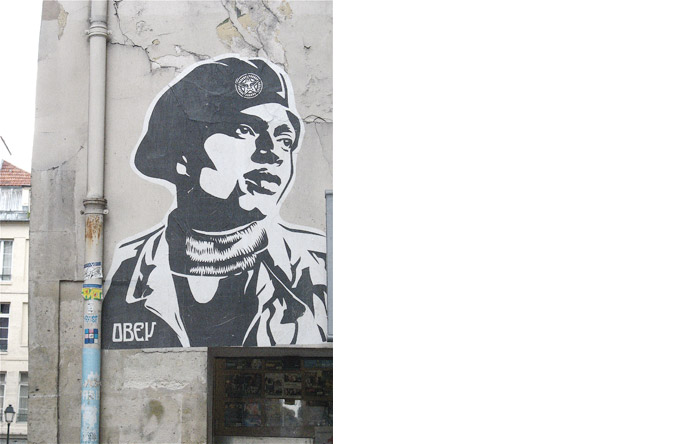 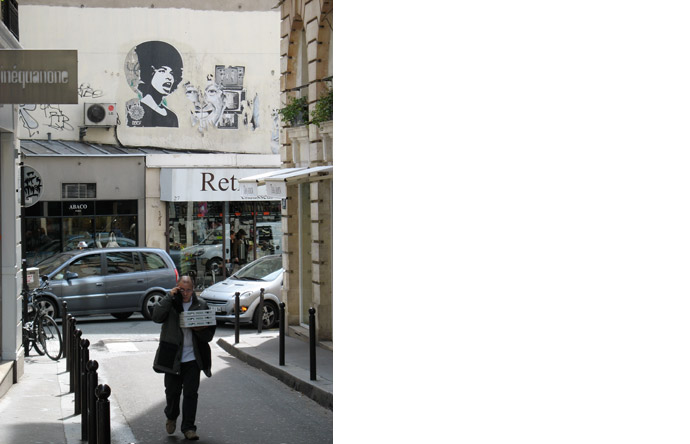 3/12 - Angela Davis shows up near Saint-Germain-des-près 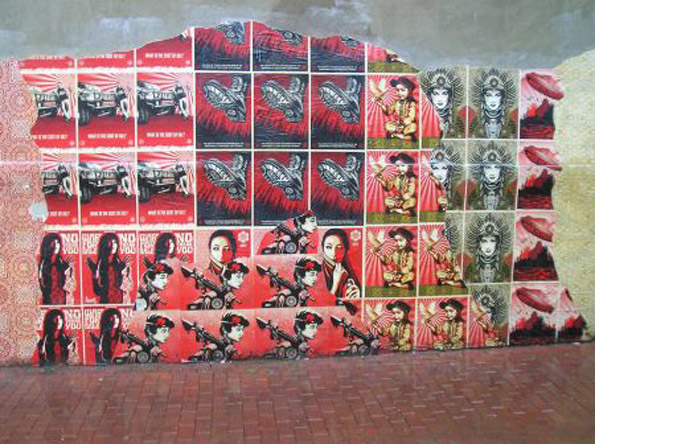 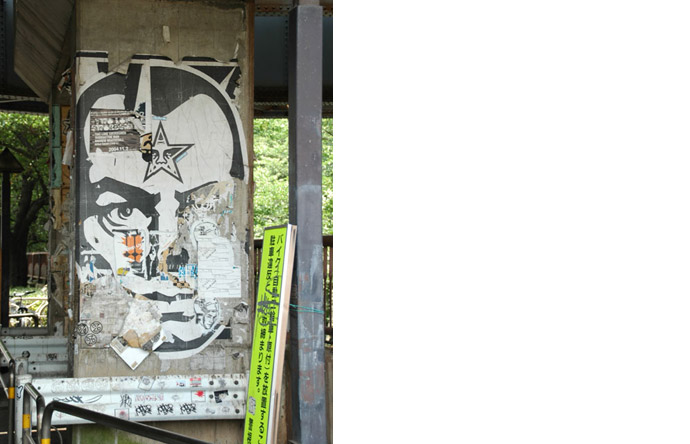 6/12 - "No Trespassing" in Denver, during the Democratic convention 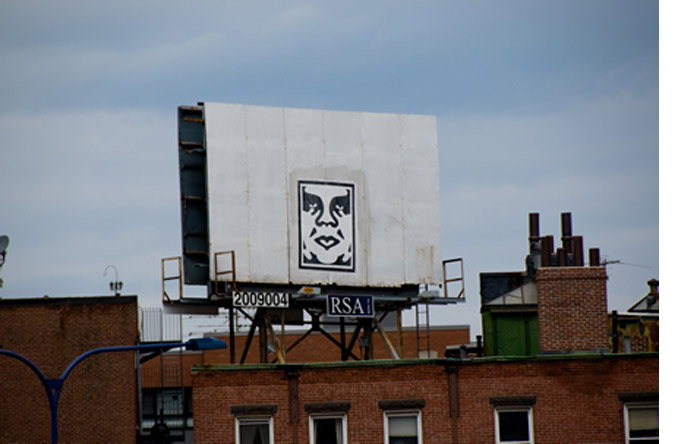 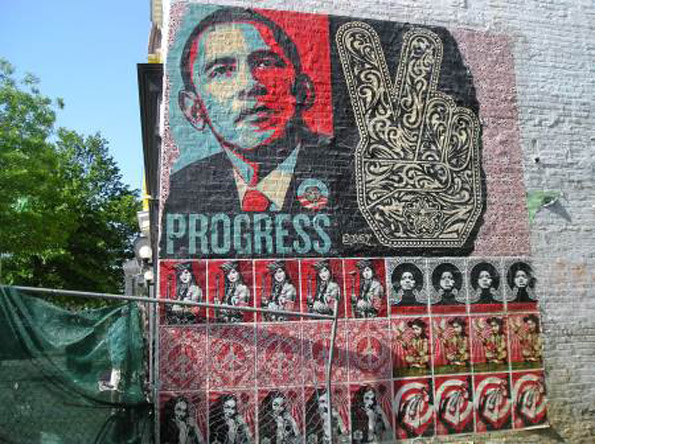 8/12 - During the Obama campaign, on a prime location on 14th street in Manhattan 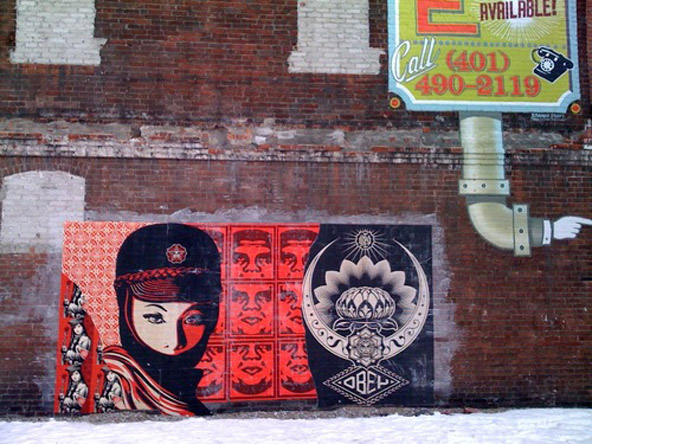 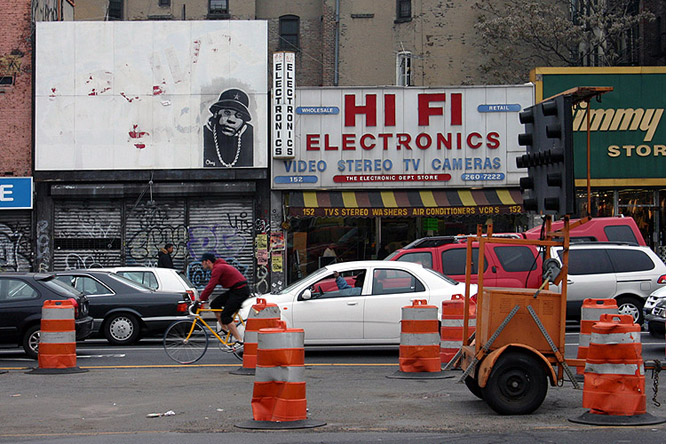 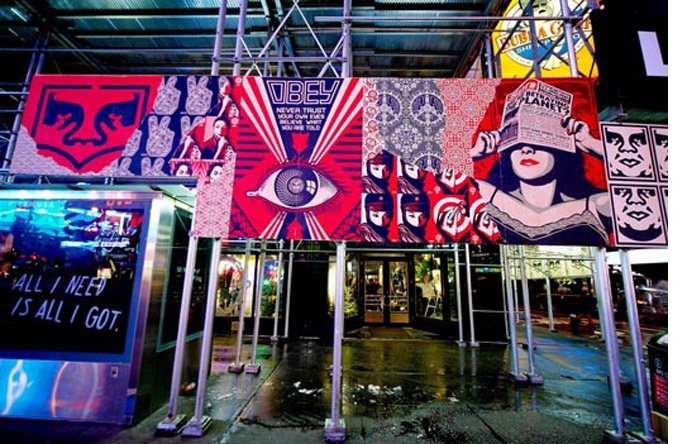 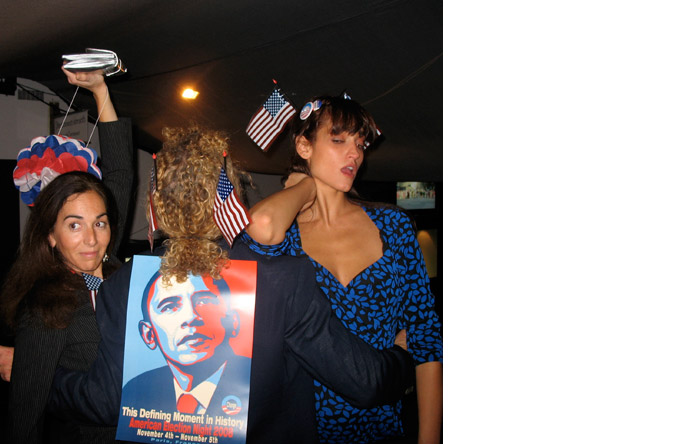